The sidewalks of Manhattan are famous for surprises—outré fashions, bizarre dog breeds and outlandish happenings (where else would an underwear-clad cowboy have a hard time turning heads?)—but it’s not often that the sidewalks themselves cause double-takes.

Recently, though, an unusual sidewalk/curb/tree pit combo by the corner of Columbus Avenue and 76th Street has been catching the eyes of local passerby. At first glance, the elongated tree pit doesn’t appear all that different than its Upper West Side peers: a delicate sapling protected from the large population of neighborhood dogs by a shin-high iron railing. But on closer examination, the odd characteristics pop out: rather than a standard curb, a border of rocks rings the pit, broken up by two big notches cut out of the curb. Manhattan’s first bioswale, according to the Columbus Avenue BID which installed it.

A bioswale, or bioretention swale, is basically a tiny, curbside garden designed to act like a big sponge, sopping up rainwater and street runoff that floods the city’s sewer systems during storms and compromises the health of local waterways. The low notched curb is designed to catch , which is is filtered through layers of stones to purify it and protect the hardy plants that it hydrates.

While a number of bioswales have been installed in Brooklyn (in March the Department of Environmental Protection installed 29 in East New York to reduce pollution in Jamaica Bay), and hundreds more will be installed in the future as part of a $10 billion DEP green infrastructure overhaul of the wastewater system, the Columbus Avenue bioswale is one of the few to be built by an outside non-profit group and the first to be built in Manhattan.

The bioswale installation came about as part of a broader effort to transform the block between 77th Street and 76th—dominated by a vista of concrete, blacktop and the chain link fence of a nearby schoolyard—into something a little more lush. Coming at the end of a corridor that takes hordes of tourists from Central Park and the thick greenery surrounding the Museum of Natural History to the shops and restaurants of the Upper West Side, the stark streetscape has long been a jarring, and incongruous sight.

The new makeover aims to change the block into a shade-filled oasis where tourists and locals will linger, with nine new trees and elongated 10-foot tree beds, ergonomic benches, in-ground solar lighting and a solar-operated compacting trash can. Overall, the project cost about $100,000 and spanned 10 years of fundraising and planning, according to Barbara Adler, executive director of the Columbus Avenue BID.

“I sometimes though it would never come to fruition,” Ms. Adler told The Observer as she pointed out the improvements on a recent afternoon. “Some were calling it Barbara’s folly.”

While the Columbus Avenue bioswale’s performance during stormy weather has yet to be assessed, the DEP said that their bioswales (they warned that the building specifications, and therefore performance, of other bioswales may vary) soak up 2,244 gallons during storms.

The bioswales built by the DEP are aimed at reducing the untreated sewage overflow into specific waterways like the Gowanus and Jamaica Bay—an unfortunate side effect of New York City’s combined sewer system, which mixes sewage and rainwater together. After years of investing in “grey” infrastructure, like building huge holding tanks to keep storm overflows until they could be treated safely discharged, the DEP has increasingly focused on greener, more cost-efficient solutions like bioswales, which help to minimize the pressure on the system and ultimately, the pollution of local waterways.

New York’s aging system funnels, on average, $1.3 billion gallons of wastewater a day through 7,500 miles of sewers to treatment plants, a system that has the capacity to handle twice that capacity in dry weather, according to a DEP spokesperson, but one that is easily overwhelmed during storms. When more than an inch or rain falls an hour, the excess rainwater gets discharged, untreated, into local waterways.

While the amount of rainwater that the Columbus Avenue bioswale soaks up might seem like a drop in the bucket, it will mean a slightly less strained sewer system. And maybe more importantly, a glimpse of how the city infrastructure might be changed for the better in the future—a  lesson in sustainability for the local children, who were, on the afternoon that The Observer checked out the revamped block, busy sketching Columbus Avenue from the other side of the school’s chain link fence. 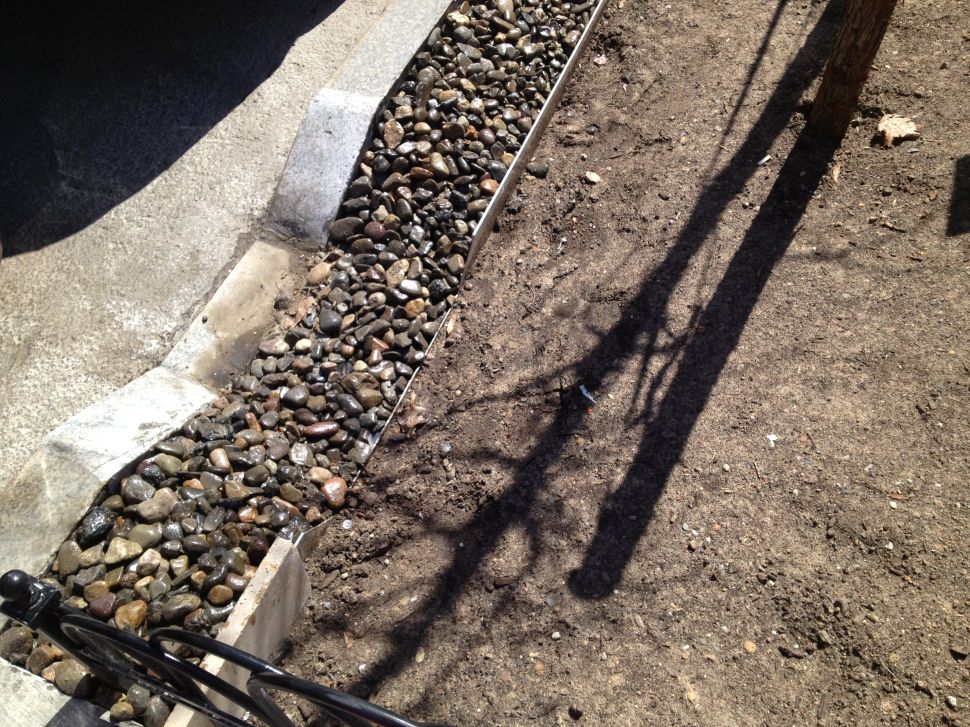