When Connors, a lame duck LD 33 assemblyman, got the heave-ho from the establishment, he repackaged himself as a city council candidate on the Fulop ticket and now presents a favorite target for the mayor’s backchattering allies still steaming over whatever went wrong between themselves and the up and comer HCDO County Executive Tom DeGIse once celebrated as “the future.”

The line now out of Healy land is that the jettisoned Connors and Healy’s opponent, downtown City Councilman Steve Fulop, never healed their own wounds, stemming in part from Connors’s criticism of Fulop’s courting of establishment support even as the councilman fronted himself as a reform-minded change agent.

“They’re trying to drive a wedge between Steve and me,” said Connors, tramping among the green shirts at today’s AFSCME labor rally outside Jersey Shore Medical Center.

Fulop would also appear onstage in support of the workers.

Connors looked like he was in his element here, but Healy’s people say their onetime friend can be seen most days campaigning alone in the Heights in a political no man’s land, shorn from Healy but never a chum of Fulop’s.

“I just talked to Steve this morning,” the council candidate refuted. “All they are doing over there is trying to divide and conquer. It’s totally, totally untrue.”

“It’s another Healy rumor,” Fulop concurred. “Sean is a great presence on our ticket. I fully expect Sean to not only win but win convincingly.”

Connors grabbed a microphone onstage and told the AFSCME workers he supports their fair contract cause.  He started as a union sanitation worker out of high school, he said to cheers.

“As Democrats, we stood up for an increase in the minimum wage,”  he said.

Healy worked the hands of workers a few arms’ lengths from Connors, who was also shaking hands.

The two men shook around each other and kept moving in the crowd. 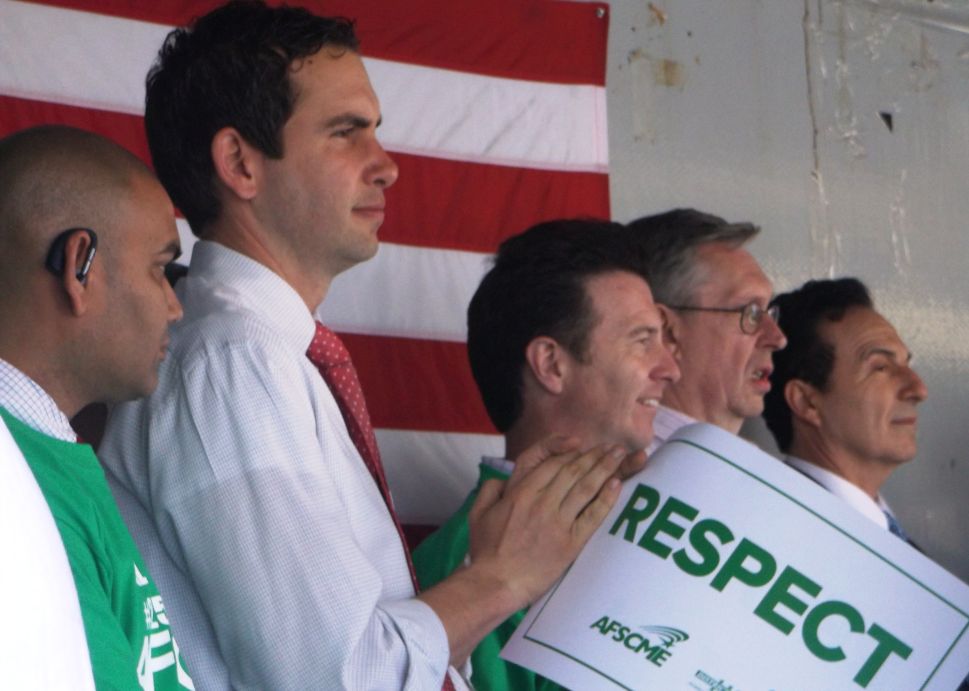