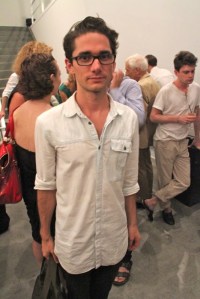 Frieze magazine announced today that it will bring on a new editor, turning the top spot on the hip monthly’s masthead into a triumvirate. The New York–based Dan Fox will now edit the magazine with co-editors Jörg Heiser and Jennifer Higgie, who work out of London.

Frieze is please to announce Dan Fox’s appointment as Co-Editor of frieze magazine. Dan has worked for frieze since 1999, most recently as Senior Editor, and has worked in Frieze’s New York office since 2009. Jörg Heiser and Jennifer Higgie both remain as Co-Editors and all three will work alongside each other on the international title. Fox will continue to work from the New York office, Heiser is based in Berlin and Higgie is based in London.

With Sam Thorne, Fox has organised the Talks programme at the upcoming Frieze New York, which takes place on Randall’s Island 10–13 May 2013. Frieze Talks 2013 will include speakers such as Douglas Crimp, Lydia Davis, Joan Jonas and John Maus.

Fox has been writing regularly for frieze since 1999; most recently on the work of Michael Portnoy, Saul Steinberg and Laida Lertxundi. Fox has also written the introduction to the new digital publication frieze Interviews, which comprises 15 conversations with key artists and thinkers including: Clement Greenberg, Bridget Riley, Wolfgang Tillmans and JG Ballard.

‘I’m thrilled to join Jennifer and Jörg as co-editors of frieze magazine. I’ve come a long way since I started, making the tea and fielding phone calls about subscriptions. Over the years, as an editor I’ve had the privilege of working with some extraordinary artists, critics and thinkers, and as a writer been given the opportunity to engage with a huge range of ideas. New York has provided me with fresh perspectives on art, culture and criticism, and I am lucky to work alongside an exceptional editorial team. These are interesting times for magazines and publishing. The landscape is changing fast and I look forward to seeing what lies ahead.’

In addition, Fox is a visiting lecturer at the Ruskin School of Drawing and Fine Art, Oxford University. He has also co-run the music label Junior Aspirin Records, with Nathaniel Mellors and Andy Cooke, since 2002. Fox has recorded and performed with a range of bands and Junior Aspirin Records has been included in exhibitions at the ICA, London; the Centre Pompidou, Paris; Artists Space, and Performa ‘11, New York.