In the basement of Ahi Ezer Congregation in the Gravesend neighborhood of Brooklyn last night, conservative Democrat Rev. Erick Salgado gathered with rabbis and other Jewish leaders to raise money and support for his mayoral campaign. And for some, the event was a forum for rabble-rousing against the socially liberal positions embraced by the vast majority of New York City’s Democratic officials.

“When I was growing up, there was no such thing as pornography. It was outlawed,” he quietly contended. “We see the trend here … It is not necessarily going to stop with this. They talk about polygamy, they call it. They want to make legal polyandry–relations with more than one husband–… and bestiality, who knows where it can end? It really has to be stopped with this and hopefully turn back. Therefore we’re backing Mr. Erick Salgado because he’s … committed to stopping these perversions and corruptions of the mind.”

Rabbi Nelkenbaum said he feared the presence of these perversions, as he called them, would inherently influence the innocent audiences who witness them, leading to the overall downgrade of society. Unless, that is, Mr. Salgado was there to help fight back.

“You know the advertisement industry … they spend millions and billions of dollars in advertisements. What’s the money for?” he asked. “If you look and see a poster, it says, ‘Drink Pepsi,’ ‘Drink Coca-Cola,’ ‘Eat Spaghetti.’ You see a somebody putting spaghetti down his mouth. It makes an impression on a person, no? That’s the way to live, they’re doing it! It must be good, let me do it also. So the fact that something may be repulsive doesn’t mean that with due time that a person won’t get conditioned.”

For his part, Mr. Salgado–vowing to push back against “the left wing” and “the liberals”–avoided wading into the specific allegations of moral wrongdoing. Instead he focused on his outsider status.

“We have a tough choice in this election. There’s many career politicians … They do know how to express themselves well. They know how to talk about politics. They know how to move around and change the words,” he said, pivoting to criticize Council Speaker Christine Quinn for attacking him as anti-immigrant during a debate Wednesday. “How many people saw the debate yesterday? At one point, the Speaker tried to twist my words. And she’s an expert at twisting things.”

Mr. Salgado, of course, has an uphill battle to the mayoralty. The Democratic electorate, with the exception of some communities, tilts much more to the left than he does and many of his party rivals have institutional support, full campaign war chests and citywide profiles. But the reverend believes that by uniting Hispanic, Orthodox Jewish and other immigrant communities, he has a path.

“They like to say, ‘You have no chance. You have no money. You have no name recognition,'” he mocked his detractors. “But still, if I have the children of God with me, I’m going to achieve the victory.”

Mr. Salgado’s speech can be viewed below, courtesy of the blog NYC Elects — 2013, which has several other videos from last night as well:
[youtube http://www.youtube.com/watch?v=WwglHLMMxxM%5D 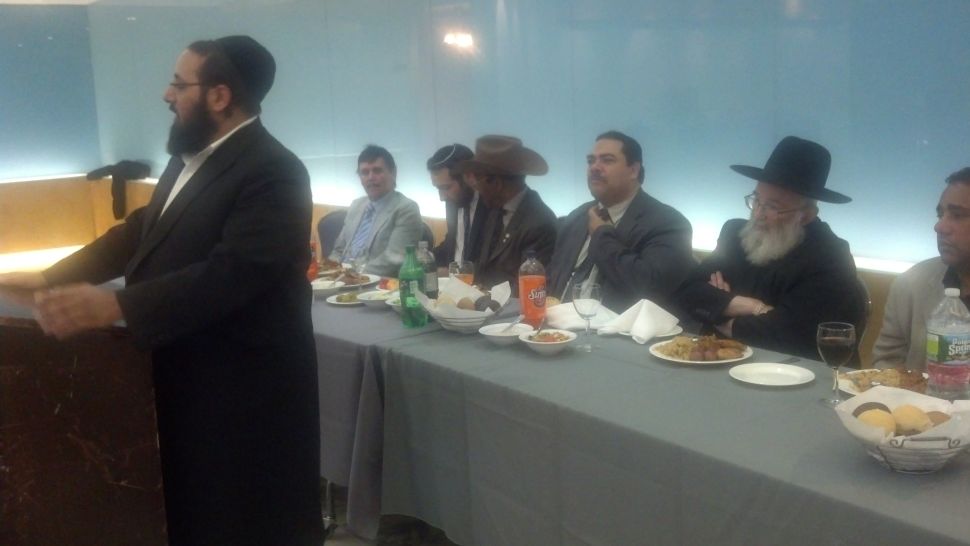