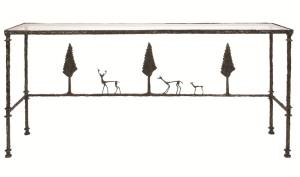 At Doyle auction house on Monday a sporty bronze and glass Diego Giacometti table from around 1975 sold for $1.76 million, setting an all-time record for a work by the designer and artist, the brother of sculptor Alberto Giacometti. The piece had been estimated to sell for only $400,000 to $600,000.

The table is titled Chevreuil, Biche et Bambi and was commissioned through dealer Pierre Matisse by the fashion designer Serge Matta, who was the brother of artist Roberto Matta. Doyle noted in its notes for the sale that, like Diego, Roberto was also represented by Matisse, so this is all pretty cozy.