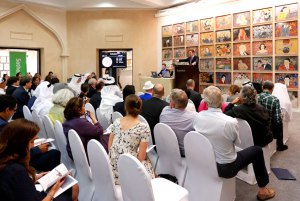 We were as excited as anybody about this week’s $15.2 million Sotheby’s auction in Doha, but Georgina Adam at the Financial Times did some snooping and found that there might not be much to learn about the region from those results.

“…a closer look reveals that most of the top lots had irrevocable bids on them, meaning they were effectively presold. This was the case for Avedissian’s work, a Damien Hirst medicine cabinet, which just made its low estimate at $485,000, and the highest priced work in the sale, Donald Judd’s Untitled (Bernstein 90-01) (1990), which sold for $3.5 million. This was bought by a U.S. dealer, as was Julie Mehretu’s Rising Down (2008), at just over $3 million. Apparently only two of the top 10 lots went to local buyers: one wonders about the logic of going so far to sell if most of the main works end up back at the home base.”