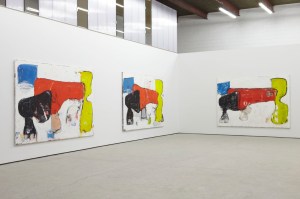 Periodically, sneakingly, the romantic figure of the brooding, hypermasculine painter resurfaces in the New York art world. He works alone in his studio, wrestling with his canvases. Eddie Martinez, who was born in 1977, is one of the most promising artists of his generation in that mold. He has made his name in the past few years creating, with ostensible effortlessness, messy yet sophisticated paintings that feature bug-eyed figures in craggy landscapes. His current show, at The Journal Gallery, represents a dramatic shift.

He has eschewed his tangles of oil and spray paint for raw abstraction, paring down his content to just four bulbous shapes, in red, blue, yellow and black, which he repeats on five white canvases, each 7 feet tall and 10 feet wide.

Mr. Martinez handles those shapes slightly differently in each painting, altering the slope of their curves or their outlines, toying with their spacing, as if these gargantuan paintings are tossed-off sketches for some much larger project. In the process he abuses his canvases, scraping and scratching their surfaces, attacking them with a disc sander. He has strewn Trident and Ricola wrappers across them, and stuck on baby wipes printed with a swirling butterfly. In two of the paintings, eyes peek out from the red mass, the only hint of humanity.

In his approach to painting, one might think of Mr. Martinez as a seasoned chess player, speedily playing out the same endgame again and again, seeing if he can tease out the most elegant series of moves through close study, and eventually securing a brutal, exacting victory. But as they stand, the paintings look like five very elegant, admirable draws—stalemates between order and chaos, static forms and effervescent movement. Aiming to do more with less, he seems a little off-balance in these new works.

But these transitional moments in a career are part of the painterly myth. In fact, they’re vital to it. Going abstract in 2013 is hardly the dramatic move it would have been 40 years ago, but Mr. Martinez, with his restless, freewheeling, gallant mark-making, makes it look significant. (Through April 28, 2013)