The New York back lot.

The march of people into an art fair on opening day is always a little funereal. The collectors are straight-faced—they mean business—and others are bracing themselves for a day spent in the confines of a convention center with its sterile fluorescent lighting.

At Paris Photo, which held its first American edition at Paramount Studios in Los Angeles last week, the mood was nothing short of giddy. Walking through the labyrinthine alleys of Paramount was simultaneously familiar and unrecognizable. The giant screen painted like the sky sitting in the parking lot seemed to lift the veil on a few open-air scenes from cinematic history. And the New York back lot—adorned with fake subway kiosks, fake brownstones and fake walk-ups with fake fire escapes—almost made me feel right at home, except that the kiosks didn’t lead to anywhere but a brick wall and the upper floors of the brownstones didn’t exist beyond the building facades. Dealers had settled inside, creating impromptu businesses that made the fair feel like a stroll through an under-construction gallery district.

“Showing in New York in L.A. is funny,” said Hervé Loevenbruck, whose gallery is in Paris. He was doing a solo show of work by the Hungarian artist Gábor Ösz. “But the light is perfect, the walls are perfect. It’s the best conditions I’ve ever seen at any art fair. It’s like if you take out all the restaurants from Soho 20 years ago, you’d have Paris Photo L.A. It’s almost like someone Photoshopped it. I think it’s an illusion! It’s like it’s too perfect.”

Down the fake block, Robert Morat was showing work by Jessica Backhaus, still-life photographs that the artist shot while living in New York (a paper towel roll sitting on a window sill, the rumpled corner of a pillow case, a close-up of a string of Christmas lights) that added to the simulacra.

“I’m not sure what this façade has been used in,” Mr. Morat, whose gallery is in Hamburg, said. “But I’ve worked hard on a New York gallery, and now I’ll finally have one.”

He added with no small amount of excitement that Ghost was shot around the corner. 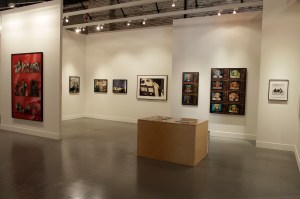 LOS ANGELES HAS been known to be “the graveyard of art fairs,” as dealer James Danziger put it, part of the problem being the difficulty of gathering a herd in a town so spread out but also because of what some people deemed a lack of support from the local galleries. Here, there was a kind of palpable hometown pride.

“I think that this is the first time I’ve ever seen a fair capture the fabric and the machinery of a city so perfectly,” said Perry Rubenstein, a New York transplant who has a gallery on Highland Avenue. His booth was inside the massive Stage 32 on the Paramount lot. “I can say with confidence, if desire alone could make a fair work, this would work. We all love it. We all feel great being here.  We all want it to work. What’s intriguing as a Los Angeles-based gallery is to actually be clustered with your fellow galleries. It doesn’t actually happen. Every gallery is a unique destination—this is the closest thing to a village that we as Los Angeles have achieved.”

The original Paris Photo, which is 17 years old and held at the Grand Palais, first considered opening up shop in New York, according to Howard Greenberg, whose gallery had a booth inside Stage 5. (This was the fair’s fanciest section, complete with a red carpet leading up to it.) He encouraged them to come to America by way of Los Angeles instead, a more natural transition. For one thing, it’s a city that appreciates images. But there’s also a history of cultural exchange between France and the West Coast. 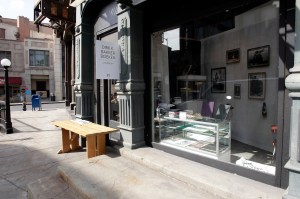 “Maybe it started with wine,” said Mary Leigh Cherry, of Cherry and Martin on La Cienega. “Our sister city is Bordeaux. This is a generalization, but historically, L.A. artists have been discovered by Europe—Italy, France, Germany, the U.K.—sometimes before New York.”

Sales were slow for some galleries initially—“It’s a different animal, a photo fair,” said Dean Anes of Gagosian Gallery in Beverly Hills. “People make decisions a little slower.” But the crowd began to swell by the end of the first day. (The valet, expecting 500 cars on Thursday, had to deal with 1,300 instead, and people waited up to three hours to leave.) Then the celebrities began to arrive.

There was something slightly perverse about the Armani-hosted VIP party, held in a cramped, roped-off corner where photographs of Haiti, taken over the course of a week in March of this year by Jim Goldberg, hung on the walls. A woman in a gold dress with four-inch heels was sipping champagne and contemplating a black-and-white image of a young boy being bathed while seated in a small, rusty bucket.

“He looks like he’s going to grow up to be a jazz drummer,” she said. Her date in an expensive suit concurred.

When the movie stars showed up, it felt inevitable, in no small part thanks to the Hollywood backdrop. There’s always a kind of hushed admiration when famous people walk into a room, like the sound of heads turning quickly but still trying to go unnoticed. Sean Penn entered, frowning. In person he’s short, with tan, rocky skin and a dark black ponytail that was perfectly (and conspicuously) manicured. The throng of photographers encircled him silently, and he offered a choreographed handshake with Mr. Goldberg before he slipped away into the crowd. Meanwhile, Kevin Bacon and Kyra Sedgwick were staring wordlessly at the photograph of the child bathing.

“What brings you here?” I asked them. “Are you collectors?”

“We were asked to come,” Ms. Sedgwick said.

“We don’t get invited to a lot of things,” said Ms. Sedgwick. 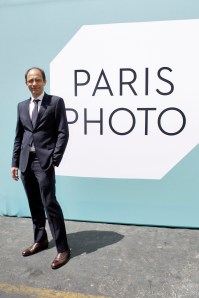 The next day, the mood had settled once more. People were taking their time, having a drink at the fake bar (with real alcohol) or having a taco on a fake stoop. I saw James L. Brooks enjoying a grilled cheese. I ran into Julien Frydman, the fair’s director, standing on a street corner in fake New York, near a real trash can, eating an ice cream cone and a cookie at the same time. “I have to finish this first before we talk,” he said. I asked him how he thought this new fair compared with the original.

“In Paris, there is a great sense of people gathering and being together,” he said. “I think that’s very important to a fair. It’s the same here. It’s not about the rush. ‘I need to buy this right now.’ It’s more about finding work and interacting with the work.”

When I asked if he thought they’d be returning to Los Angeles, he said, “Sure! Of course! Why not?” 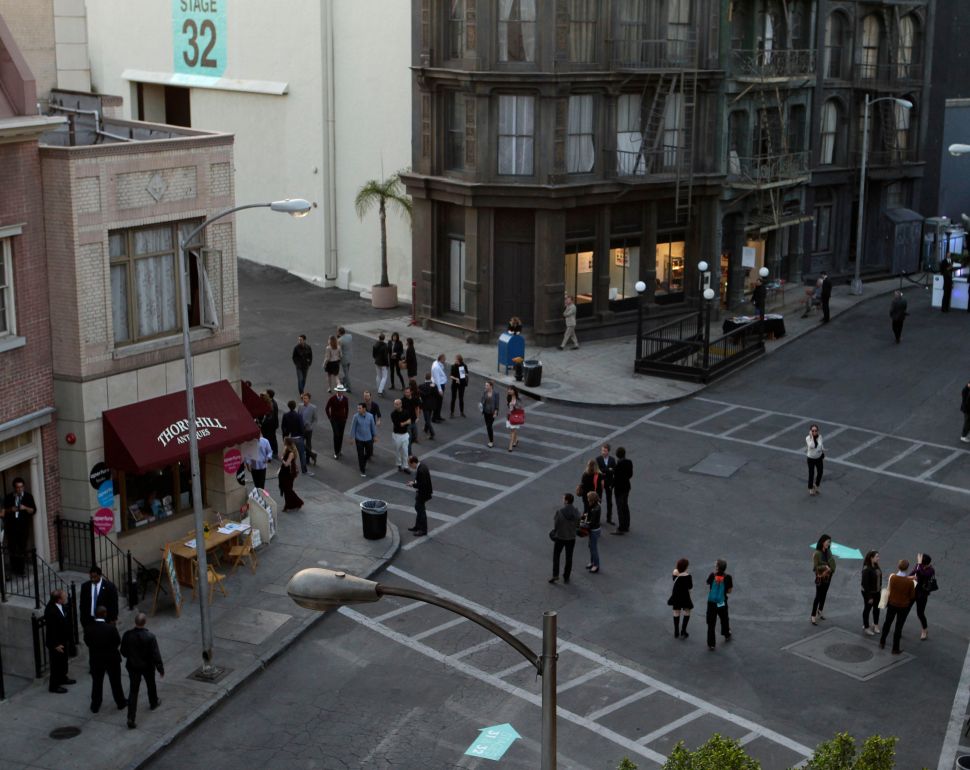