1. You serve on the board of trustees of your family’s corporation. When you enter a board meeting one day, you see that the CEO, your father, has sat at the head of the conference table and set up the rest of the chairs on one side. The three non-family members on the board immediately take the seats nearest your father. Do you: a) sit in the chair farthest from your father, b) drag a chair to the opposite side of the table, next to your father, c) drag a chair to the tail of the table across from him, d) wait to see what your sister does before you decide, or e) throw a glass of wine in the CEO’s face, piss on the table, and tell everyone to fuck off with their silly little game of musical chairs, because at least one person at the table has recently tried to kill you, all of the others have at least considered it, and anyway your father the CEO really only wants to talk about your brother, to see whom again for even one minute he would gladly stab you in the heart and dance on your bloody corpse?

Um, the last one? Obviously? (Although how is C different than A? You move the chair farther away?) It’s funny how Tyrion still thinks he can win the game by playing by the rules of the system (something we’ve recently criticized Cersei for, so maybe it’s a hereditary problem.) It should be crystal clear after last week’s dad talk–not to mention last season, when your sister tried to kill you–that you were better off being the family spokesperson over on the Wall. Or at the Veil. Or literally any place besides King Landing, with your actual family. If I were Tyrion, I wouldn’t bother with the meetings, but instead gladly take the position of Master of the Coin, steal a bunch of it, collect my whore, sellsword and surprisingly cunning linguist of a squire (my real friends) and head off on my own.

Couldn’t be worse than listening to the Spider fight with Littlefinger every day, could it?

2. Frequently, on mediocre cop shows like The Mentalist, the protagonist will resort to lying to everyone, including his colleagues on the police force, in order to trick a suspect into confessing. Instead of letting his friends in on the ruse, the detective fools them too, presumably so that their reactions will be sincere, so that he doesn’t run the risk of their bad acting blowing up his spot. Assuming Daenerys does not really mean to give up one of her dragons–which she obviously doesn’t, as they are basically her children–is she pulling a similar gag on Ser Barristan and Ser Jorah, making them believe she is sincere to sell her lie? And if so, then why does she yell at them afterward when they are in private, instead of just letting them in on her plans?

It’s funny you mention The Mentalist, because that’s a pretty big Sherlock Holmes tactic: keeping Watson and therefore the reader in the dark as long as possible because it was “necessary” to solve the case.

And since Arthur Conan Doyle stole a lot of shit directly from Poe’s Auguste Dupin and Émile Gaboriau and Monsieur Lecoq, I think we can safely say that Daenerys is taking one from the modern-day detective’s handbook. But Daenerys isn’t a super-genius who solves mysteries for a living: she’s a deposed queen with three extinct animals to barter. Like you said, there’s no way she’s actually going to give Lord of the Eunuchs one of her babies, though we can forgive him for thinking so. It really says a lot about her closest confidants–one of whom, to be fair, she’s known for all of a day?–that they not only believe this very thin ruse, but then would try to stop her during a meeting. Bitches, she’s your queen. Don’t do that.

At least Jorah should be smarter. “Hey, are you just going to do the thing where you blast dragon fire at them again?” Wink wink, nudge nudge.

I actually think this set-up was more for their sake than the Free City lord. I mean, she could have let them in on her plan, or she could kill two birds with one stone: make the guy believe she was serious about her offer (after all, her counsel is trying to stop her, which they wouldn’t do unless this was a trip), and remind her boundary-crossing buddies just who the Motherfucking Mother of the Motherfucking Dragons is.

3. Imagine you are a management consultant giving a leadership seminar. Which of the following would you want to use as your main example of how not to be an effective leader, and why? Edmure Tully, Lord of Riverrun, who cocks up both his dad’s funeral and a strategic battle; Stannis Baratheon, who seems to think begging his crazy girlfriend to sleep with him again (in public!) will somehow make people think he isn’t weak/losing the war; Lord Commander Mormont of the Knight’s Watch, who has decided to make himself and his men completely dependent on an abusive, incestuous, murderous local warlord; or Tywin Lannister, who has now given control over his finances from one confirmed crook to another?

There is a a very famous Tony Robbins TedTalk where he talks about how he gets calls from parents telling him that they have a suicidal kid. Apparently, part of Tony Robbins’s job is to talk kids out of suicide. And you know what?

“I haven’t lost one in 29 years. Doesn’t mean I won’t someday, but I haven’t done it.”
That is how Tony Robbins manages his shit: kids do not commit suicide after meeting him.

Since Tony Robbins is the closest thing I can think of to a management consultant at a leadership seminar, I would say that his example of terrible leadership would probably be Tywin. Why? Because the rest of them are working off an optimistic outcome…no matter how deluded, they did what they did because they thought it was the right thing to do in order to motivate their troops and win.

Except for Tywin Lannister, who seems to be working from a pessimistic game plan: his son is obviously the least-qualified person to become Master of the Coin, and it’s a position that comes with a trap…Littlefinger has obviously been fudging the books. So what could he possibly hope to achieve by this? Prove that his dwarf son is a fuck-up? Have the dirty secret of the crown’s finances come to light? How does that help Tywin Lannister, let alone the rest of his family and country?

It doesn’t, is the answer. And for that, I’d like to send both Tywin and Joffrey to a Suicide Prevention class led by Tony Robbins to get an attitude adjustment and a better management strat!

4. The White Walkers are generally zombie-like, but with their artistic arrangement of the (horse) body parts, they have invoked another horror-movie trope: the baroque madness of serial killers. Beyond being freaked out, what are we supposed to make of this melding of supernatural horror (which is generally associated with mass culture) and psychological horror (more often connected with the individual)?

Ah yes, the repetitive pattern of decorative horse heads trope. Reminiscent of the Zodiac killings, John Doe’s “sins” from Se7en, and the Rube Goldbergian death traps of the Jigsaw murders.

Wait, no. The most natural melding of the psychological and the supernatural is the idea of a cult: some group of people who act out the wishes of some strange, charismatic leader. And if anything, the White Walker pattern suggests some kind of designed symbol or rune, or a ritual performance…a true sign of a mass occult.

We’ve seen the White Walkers set traps before, like in the opening scene of the show, so we know they have some cognition, but what remains to be seen is whom they answer to. Is there some higher power to whom the White Walkers are paying tribute to with these horse head designs? Or do they just, as a community, like to DeviantArt-up their killing patterns in order to freak out their prey?

And most importantly: Are they more like the Manson Family or Branch Davidians? Scientologists or Heaven’s Gate?

5. Though the bar ballad “The Bear and the Maiden Fair,” about a maiden who thinks she will meet a knight but is instead carried off by a bear, is sung many times in George R.R. Martin’s novels, this is the first time i has appeared in the show, sung once by Jaime/Brienne’s captors and then again by Brooklyn band The Hold Steady over the closing credits. Why did the showrunners pick this episode for the song’s double debut? Who is the bear here and who the maiden? Things to consider: Jaime’s character arc; Theon’s serendipitous rescue; the sigil of House Mormont and the first syllable of ‘Barristan’; the Hound’s ugly mug; Podric’s magic penis.

In the books *achem*, The Bear and the Maiden Fair is a pretty goddamned heavy-handed metaphor. It’s only ever sung in a scenario that Martin wants to highlight as some big Bear/Maiden metaphor. Like, in this week’s episode, obviously the roles of Bear and Maiden were switched off by Brienne and Jaime. When he saves her from being raped and sacrifices himself in the process, Jaime undergoes the reverse knight/bear move and becomes worthy of the title “knight” for the first time. Meanwhile Brienne, the tough bear knight, is reduced to the status of “maidenhood” when the men try to break hers. (Sorry, gross.)

But yes. That dumb song can be applicable to many, many scenarios. Kind of like the Hold Steady themselves, whose music can be played at almost any kind of party without anyone complaining, but without actually being a great band. 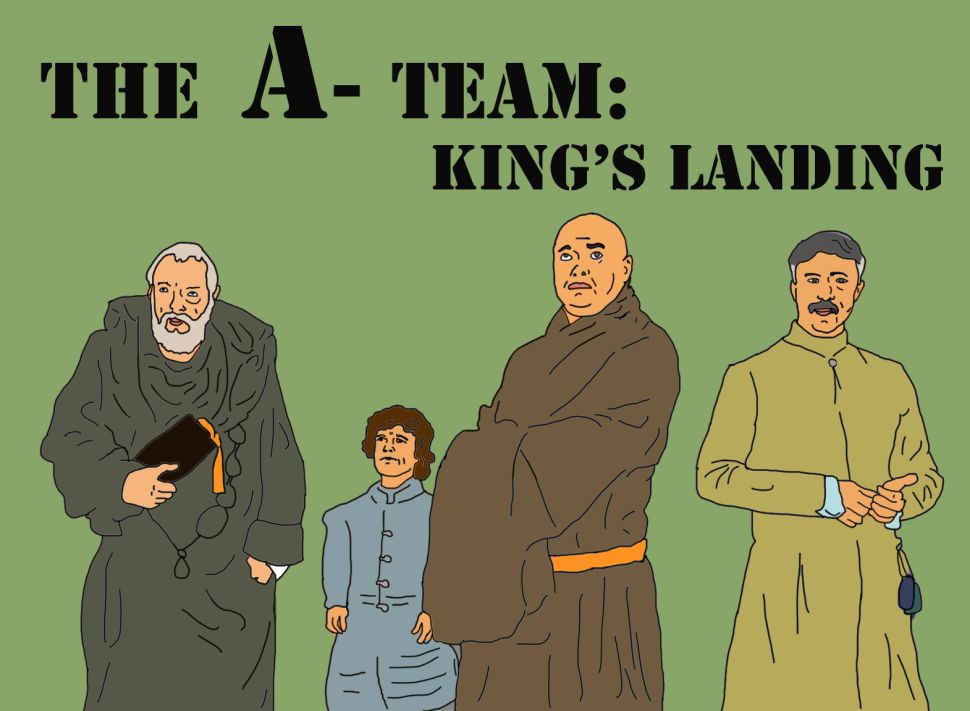