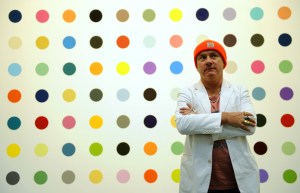 The Art Newspaper reports that this spring Gagosian Gallery will publish a catalogue that lists every Damien Hirst spot painting.

In total, a source tells the paper, there are around 1,400 spot paintings around the world. That precise figure wasn’t exactly known and, according to some dealers, that may have made them harder to sell.

“I’ve heard estimates ranging from 2,000 to 7,000,” says Harry Blain, co-founder of the gallery Blain/Southern. He believes that the publication will increase confidence in the series because it will allay fears that the paintings are much more numer­ous than they actually are. He says it will also show the series’ variety. “People often say the spot paintings are all the same, but they’re not—far from it. The catalogue will give an understanding of the many subsets within [the spot works].”