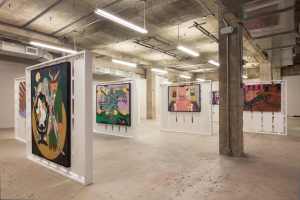 Whatever you want to say about Bjarne Melgaard, you can’t accuse him of being boring. Over the past few years, across a prodigious number of shows, he has displayed a compulsive, unrelenting and sometimes horrifying drive to entertain—to be as absurd, shocking, pornographic, melodramatic and soulful as is necessary to dominate the spotlight. His latest show, organized under the auspices of an outfit he calls Big Fat Black Cock Inc., is all of those things. It pairs 13 paintings from 1950 to 1994 by the sui generis gentleman collector, dealer and painter William Copley (1919-1996) with six by Mr. Melgaard from 2011. They’re hung on trestle-like standing panels that are similar to those used by Copley in his short-lived Los Angeles gallery, and that serve here at Venus Over Manhattan (disclosure: the gallery is owned by Observer columnist Adam Lindemann) as an elaborate mise-en-scène for the latest of Mr. Melgaard’s twisted rococo fantasies.

Copley’s paintings brim with bright colors, thick lines and entrancing patterns; many are of cartoonish figures coupling, or just generally taking unembarrassed pleasure in their bodies. The nude woman in Cat on a Hot Tin Roof (1972–73) is sprawled out on a checkered bedspread; the one in Scorpio Rising (1973) kneels before a pensive man. In Untitled (The Card Players) (1981) a bowler-hatted man appears to be besting his female companion in a game of strip poker. In Copley’s world, even objects—a straight razor, clarinets on the panels of a folding screen—ooze libidinal energy.

At a glance, Mr. Melgaard’s paintings of naked people are nearly impossible to distinguish from Copley’s. They have the same flowing lines, richly colored backdrops and unadulterated joy. The difference is that Mr. Melgaard’s figures are black. It is a significant difference: without it, one’s attention would not necessarily be drawn to the fact that Copley’s are exclusively white. 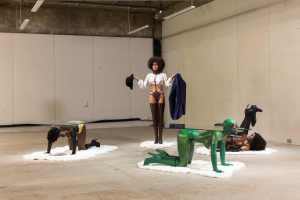 Alongside Mr. Melgaard’s Copley-redux paintings—skin color aside, they’re otherwise exact copies of the latter’s works—he displays meticulous remakes of furniture by the British artist Allen Jones that feature life-size sculptures of black women (fiberglass resin with human hair) in bondage, one of them supporting a glass table on her back, another a cushion on her bottom. A third holds out both arms, a human coatrack.

True to form, Mr. Melgaard is both winking and sincere. He surely knows this is the stuff of art-world parody—a white artist replacing another white artist’s white figures with black ones—and yet it is also in keeping with his overall project, sexual domination by a black man having been a theme in previous Melgaard productions. The sheer loving detail that he brings to his tributes to Copley and Jones betrays a sincere reverence for these freethinking forebears. An unrepentant provocateur, Mr. Melgaard is, as usual, courting offense. But it’s worthwhile to remember that the Surrealists whom Copley championed as a dealer and collector believed that such psychic shocks could be liberating. (Through June 1, 2013)