[UPDATE: The man in the photo has been identified as a 27-year-0ld named Jeff Bauman, Jr., and is in stable condition, according to a Facebook post written by his father. The New York Times published this account, along with the photo, on Tuesday evening.]

Among the many photos that captured both the senselessness and the humanity of the Boston Marathon bombing, one that stands out is an image of three people wheeling an ashen-faced young man–since identified as Jeff Bauman, Jr.–through the Boston streets.

Viewed in its entirety, the picture, taken by Charles Krupa for the Associated Press, reveals that all that remains of the young man’s legs is a grisly twist of bone, nerves and skin. As a cowboy-hatted samaritan, Carlos Arredondo, pinches one of the man’s stray arteries closed, a police officer and what appears to be a marathon volunteer help maneuver him in a wheelchair. While media outlets variously cropped the photo at the knees to spare readers, BuzzFeed, The Atlantic and Gawker opted to run the picture uncensored, sparking commenter wrath, Twitter reverb and a debate about media photo standards.

“We agree that this image is difficult to look at but believe that it is also a true depiction of the terrible nature of this story,” said Atlantic communications director Natalie Raabe via email. “We were careful to prepare viewers for the graphic content, including a warning that entirely obscures the photo.” (The Atlantic also blurred the man’s face “out of respect for his privacy,” as the warning notes.)

BuzzFeed editor Ben Smith defended his decision to run the photo, which came with a trigger warning. “Photos From The Scene Of The Boston Marathon Explosion (Extremely Graphic),” the headline reads. The subhead of the post added another warning.

“This was an incredibly horrible thing,” Mr. Smith told Off the Record. “These photos were powerful and accurate and conveyed that.”

Mr. Smith added that he saw and approved the photos before they were posted. “It was a judgment call based on what we were trying to portray,” he said.

Ultimately, editors must try to balance the value of a photo with its graphic nature. Is it adding anything to the story? Or is it gratuitous? Will publishing it unnecessarily harm a victim who is already injured?

The Daily News opted to blur the injuries and The New York Times passed on the image altogether in its early coverage. Standards editor Phil Corbett told Off the Record, “We clearly would consider the full frame of that photo to be too graphic to publish. It does not seem like a close call to me.”

James Estrin, a senior photographer at The New York Times and the editor of its Lens blog, said, “I’m not opposed to showing blood and, on rare occasions, a dismemberment, if it’s integral to telling a story.”

But Mr. Estrin noted that he wouldn’t have run the photograph in question. “It’s so graphic,” he said. “I’m not sure the graphicness advances the story.”

Many BuzzFeed commenters shared that view, though at least one said the reader complaints themselves were in poor taste. “How can you piss and moan about seeing a man without a leg WHEN THERE IS A MAN WITHOUT A LEG?” wrote a commenter named StickMan. 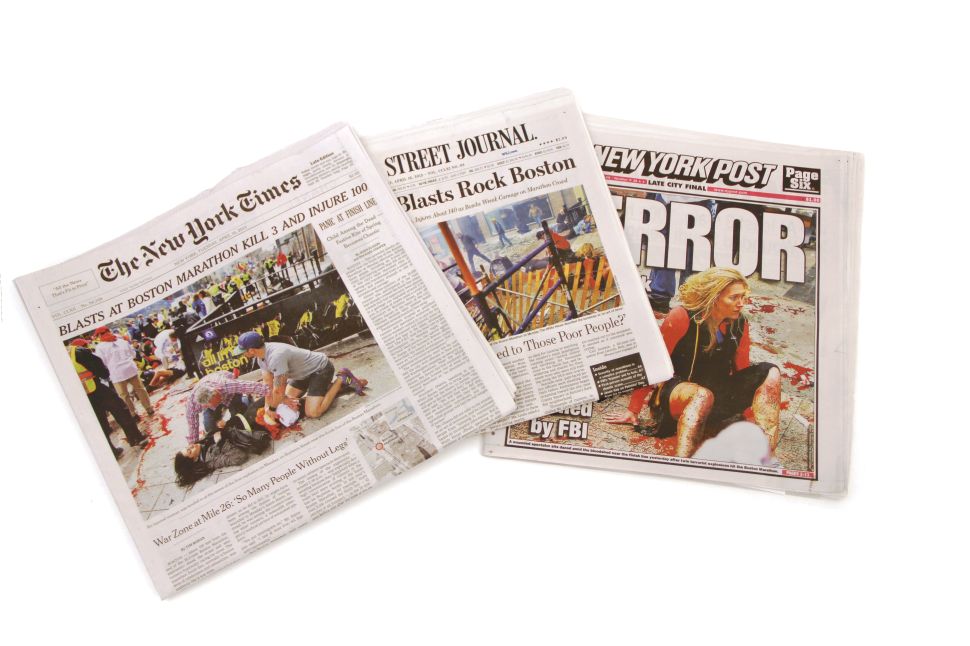