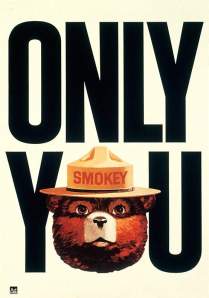 A big thank you to the anonymous tipster who just shared with us that art critic Harold Rosenberg—the astute observer of Abstract-Expressionism who coined the term “action painting”—is responsible for the forest-fire prevention mascot Smokey the Bear. The story is told in this excerpt of Irving Howe’s A Margin of Hope, published on a 1999 website for a PBS film about New York’s midcentury intellectuals called Arguing the World:

“Even the ways in which New York writers earned their livings helps place them as an intelligentsia. A few scholarly figures like Schapiro and Trilling were professors. Harold Rosenberg had an enviable part-time job at the Advertising Council, where he created Smokey the Bear. (The sheer deliciousness of it: this cuddly artifact of commercial folklore as the creature of our unyielding modernist!) The others, as the Yiddish saying has it, lived mostly ‘off the air.'”

There you have it!