JERSEY CITY – The street runs from an alleyway into a highway without warning and on the other side of 130, stands the nondescript headquarters of Mayor Jerry Healy.

There was a man out front, tie flapping in a light breeze.

It was Mayor Healy.

He’s running for his third term of this city clinging to the side of New Jersey like the best and worst of the rest of the state bulldozed to the brink, and just two days ago, after weeks of under the radar operating by the other side, challenger Councilman Steve Fulop walloped Healy with an ad.

It shows the mayor in a diner talking to disgraced developer Solomon Dwek in an FBI recorded encounter that resulted in the jailing – and suicide in one case – of a slew of political operatives dinged for taking bribes.

Healy met with Dwek but didn’t personally take any cash.

“No one’s been vetted the way I have,” the mayor said. “Everyone knows I was the main target. You can imagine what I went through. And I came out clean. He’s not running against these folks (the late operative Jack Shaw and former Deputy Mayor Leona Beldini) who veered off the path of righteousness. He’s running against me.”

He sat in the executive chair in the war room with ground game operatives Dave Parano and Craig Guy.

He looked confident, with a little swagger on as sources say a Healy poll pre President Barack Obama endorsement showed the mayor up by four. After three weeks of Obama on the bullhorn, camp Healy trusts Fulop feels a little lumped up right now.

Having endorsed Fulop and lent his face to Fulop ads in the African American neighborhoods, U.S. Rep. Donald Payne, Jr. (D-10) isn’t exactly eagerly signing up for door pounding duty on behalf of the challenger now that the President stands with Healy.

That’s why the challenger went to the Dwek card in his TV commercial.

Not much else is, laughs the mayor’s allies.

“If you want to win a campaign by badmouthing your city and saying it sucks, I think that’s a horrible way to go about it,” said the mayor, who’s running on a record of holding the line on taxes for three years running.

He’s the old veteran with four kids in the city and five grandkids, the bon vivant who sings Sinatra. “Obama’s got a good voice,” he said. “Not as good as mine.”

Fulop’s the coolly calculating comer: the guy you might not want to have a beer with, but who just might be clearer eyed while someone else is face down on the bar. So goes the argument of his backers.

But with 28 days to go until Election Day, Dwek appears to be Fulop’s reminder to voters that Healy is not simply the Obama candidate.

An insider sat on a stool in a watering hole off JFK Boulevard and swore to PolitickerNJ.com he backs neither candidate. “You can drive by my house, you won’t see a sign on my lawn,” he insisted.

The insider said he sees Fulop in trouble.

That’s why Fulop cracked Healy’s knees with the Dwek spot, he said.

“Fulop has played into Healy’s hands,” the insider told PolitickerNJ.com. “Steve was supposed to be something different. He isn’t. You can’t proclaim yourself to be a change agent while mudslinging. You have to show us something positive.”

Back at headquarters, Healy agrees.

“We think Steve is generating nonsense in order to make himself a viable candidate,” the mayor said. “If he’s so concerned about our kids, as he says, why didn’t he vote in school board elections until 2004 when he ran against Bob Menendez? I have blood in this city, Steve doesn’t. He has higher aspirations. I’m staying right here.”

Does have Fulop have any good ideas?

“I haven’t heard any,” the mayor said with finality. 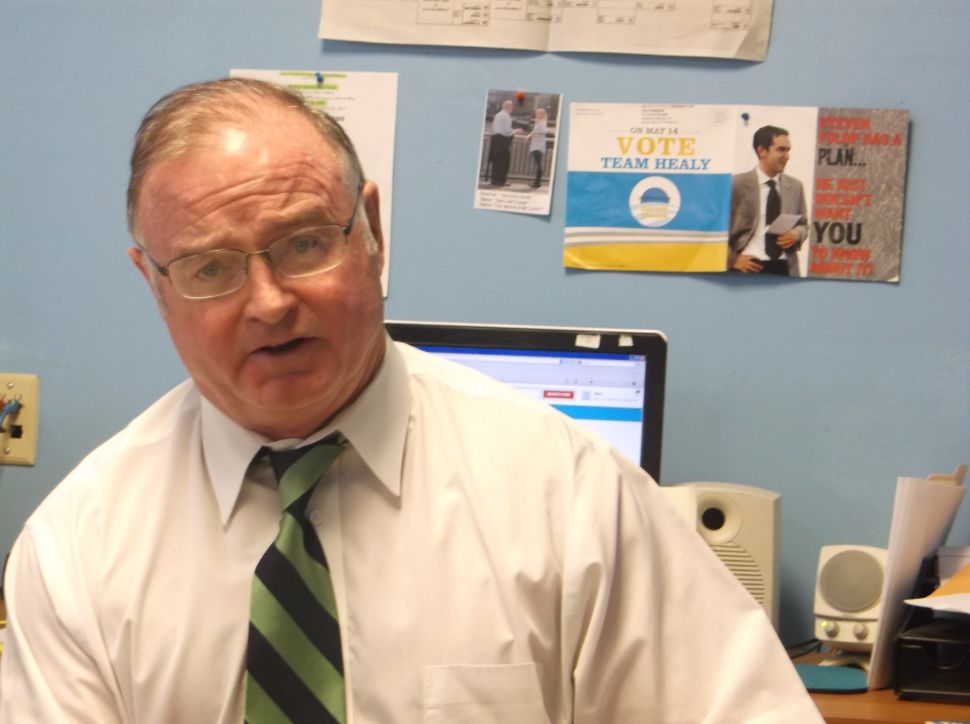