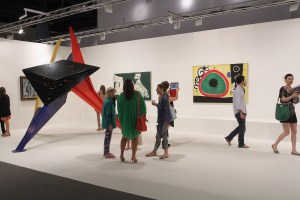 Helly Nahmad isn’t named very frequently in the sweeping criminal indictment for the case that led federal investigators to raid his gallery this morning, though he does show up in a few key places.

According to the complaint, the Nahmad-Trincher Organization kept busy: “NAMHAD worked with TRINCHER to launder tens of millions of dollars on behalf of the illegal gambling business.”

Here’s a nice summation of the main accusations, from the complaint:

Titan pops up in the indictment later, in a section that concerns the extortion of a person called only “Client-3,” another owner of Titan:

ILLYA TRINCHER, ARTHUR AZEN, DON MCCALMONT, and JOHN HANSON, the defendants, willfully and knowingly did participate in the use of extortionate means, as that term is defined 1n Title 18, United States Code, Section 891(7), to collect and attempt to collect extensions of credit, as that term is defined in Title 18, United States Code, Section 891(1), and to punish a person, to wit, Client-3, for the nonrepayment thereof, to wit, TRINCHER, AZEN, MCCALMONT, and HANSON threatened to cause, and did cause, harm to Titan, Client-3’s plumbing company, to collect and attempt to collect a $2,000,000 gambling debt that Client-3 owed to the Trincher-Nahmad Organization.

Mr. Nahmad is accused of paying Mr. Trincher $500,000 from his father David’s Swiss bank account, which would violate a law related to “interstate and foreign travel and transportation in aid of racketeering enterprise.” In a similar fashion, he allegedly paid $850,000 to a man named Noah Siegel, a.k.a. “the Oracle.”

The alleged criminal activity is said to have spread into Mr. Nahmad’s art business too. The indictment says that Mr. Nahmad and a man named Nicholas Hirsch “used interstate and international wires in furtherance of a scheme to defraud an individual concerning a sale of a piece of art that they claimed to be worth approximately $300,000 but was in fact worth at least approximately $50,000 less.”