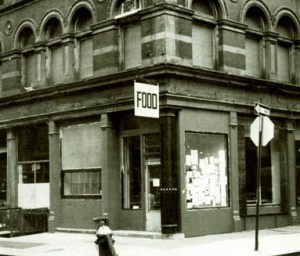 One of the really charming parts of Frieze New York last year was John Ahearn and Rigoberto Torres doing life casts of people’s heads at the fair. The work was meant to pay tribute to the storied alternative space Fashion Moda, which ran in the South Bronx from 1978 to 1993. (More on that here.) This year Frieze Projects is continuing the tradition of remembering a legendary New York spot by having artists cook as a tribute to FOOD, the restaurant Gordon Matta-Clark, Tina Girouard, Carol Gooden and others ran in Soho beginning in 1971 at 127 Prince Street. (It’s a Lucky Jeans store now.)

The artists playing chef are Matthew Day Jackson, Ms. Goodden, Ms. Girouard and Jonathan Horowitz, Frieze Projects New York Curator Cecilia Alemani announced today at a press event in New York. A different artist will be in charge each day of the fair, which runs May 10–13.

Mr. Horowitz will be cooking up vegan fare. (Readers may recall that the artist presented shows called “Go Vegan!” at Greene Naftali in 2002 and Gavin Brown’s Enterprise in 2010, and is indeed a vegan.) Mr. Jackson will be presenting foods one might eat during wartime (which is to say, nonperishable items), like hot dogs, Spam and beef jerky. (And yes, Tang.) Ms. Goodden will be serving up FOOD’s beloved soups, and Ms. Girouard will handle a pig roast as a tribute to one Matta-Clark staged under the Brooklyn Bridge in 1971 during an art show there.

Here’s Ms. Gooden on that cookout, via The SoHo Memory Project:

Gordon cooked “dinner” which was a suckling pig that I got from the Jones Street meat market. He injected the pig with pepper water, which made it very succulent and juicy. Gordon and I collected tons of branches from the NJ swamps to build our fire. He also covered all the junk cars with branches, and they were part of the “piece,” in his mind. I swung a hammock between piers so that we had some place to lie during the night as the pig slowly cooked. Then Gordon served (reportedly) 500 ham sandwiches to all the participants in the show and the audience who came to look. While Gordon and I rested in the hammock, across the East River, there blinked big red lights on a building – THE WATCH TOWER, THE WATCH TOWER. I think Dickie played the sax, maybe even the whole Philip Glass Ensemble played. Mabou Mines did a Beckett play—totally great. 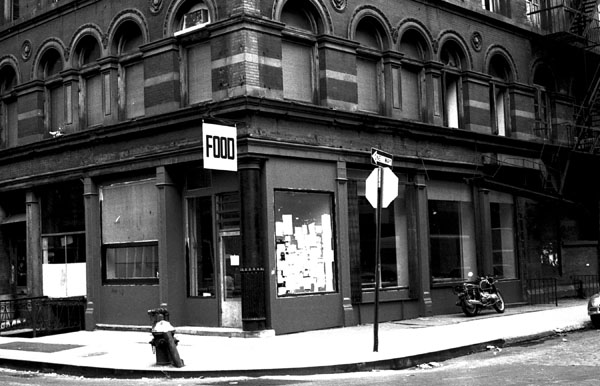