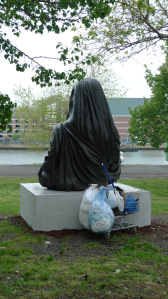 This morning the organizers of Frieze New York released the list of participants for its sculpture park on Randall’s Island, which will be up during the fair, from May 10 through May 13. CCS Bard’s executive director, Tom Eccles, is once again handling curatorial duties.

This year Paul McCarthy will present an 80-foot inflatable balloon dog, a nice complement to his two shows at Hauser & Wirth that open with the fair. This spring is set to be a full-frontal assault, McCarthy-wise! He’ll also have a show at the Park Avenue Armory at that time.

One standout from last year’s park was Christoph Büchel’s shopping cart sculptures, which he said were acquired from homeless people around New York.

The full list follows. It’s certainly interesting in a “who’s up, who’s down?” kind of way.