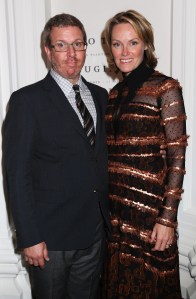 Andrea Glimcher, Pace Gallery’s director of communications and the wife of its president Marc, appears in this week’s Film Forum newsletter as part of their regular feature called “My First Time.”

The feature has personalities like Gregory Crewdson and Isaac Mizrahi describe their first trip to the movie theater (for The Red Balloon and Funny Girl, in their cases).

Ms. Glimcher’s first big screen experience had her in the sometimes capable hands of George Lucas. See below:

“The most intriguing facade in the Connecticut town where I grew up belonged to the movie theater on Main Street. Towering white columns supported a Palladian dome. Inside the rotunda was a large painted mural which one passed underneath to reach the cinema’s glass lobby doors. It was a thrilling, influential experience to go to the cinema. As a child, the drama of that architecture was matched by one of my earliest movie memories in that space – the opening crawl of STAR WARS.

The yellow text rolling intensely at an angle confounded me: movies were supposed to show images of people and landscapes. What was happening?! Language was taking center stage. Since I was very young and still a novice reader, there was this incredible adrenaline rush as the words scrolled over the field. My heart and mind raced anxiously as I thought, “Wait! Can’t they slow it down? It’s all happening too fast, how can I keep up? Oh no, there’s no time even to think about it. I have to concentrate…” I pulled myself together and soaked up what I could: civil war battles, rebel spies, secret plans, the Death Star, agents, Princess Leia, starship, freedom to the galaxy….

At the same time, I slowed down by listening. Hearing John Williams’s score as I fought to keep up with the text was probably, in retrospect, a priceless early lesson in awareness: learning to take cues in other ways and seeing things in both parts and as a whole to make sense of it. Maybe it lasted less than a minute, but that afternoon the roll-over suspended me in time. It was one of those moments one recognizes as being truly significant while it’s happening.

After that rollercoaster ride, I breathed a sigh of relief, settled in, and loved the movie. The special effects had their power and swagger, of course, but other memories are almost more vivid, among them the odd thought that R2-D2 was as cute as one of my stuffed animals, the bar scene with the wacky music (which I later accessed again and again at home on my record player with the 45-rpm), Princess Leia’s twin, twisted, donut-like hairdo, and the sudden realization that my older sister could not sit still whenever Harrison Ford was on screen. It was all new and marvelous. The next time I walked through those lobby doors was for CLOSE ENCOUNTERS OF THE THIRD KIND after which I spent the entire fall of 1977 making towers, volcanoes, and other sculptures out of the mashed potatoes on my dinner plate – much to my mother’s chagrin.

Andrea Glimcher is Director of Communications at Pace, the modern and contemporary art gallery with locations in New York, London, and Beijing. She joined the company in 1994.”