The Kunstverein Amsterdam is setting a sterling example for museums and galleries worldwide with its announcement for its upcoming show “Larry Bell and Sarah Crowner meet Marlow Moss.” This is how you get people excited, folks. The glorious announcement image, reproduced below, shows Ms. Crowner holding up a photo of Larry Bell, and comes to us via artist and Primary Information cofounder James Hoff, who shared it on Facebook. What a thing! 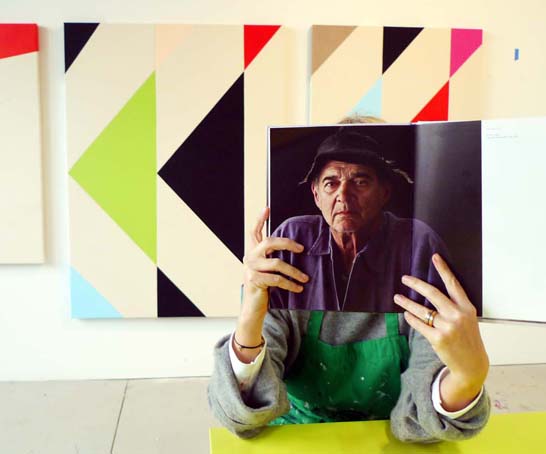 The exhibition runs April 20–June 22 (the Marlow Moss contribution arrives May 18), which is perfect if you’re going to be in Europe this summer for the Biennale and Basel.

But there’s more. The news release is masterful. You can read the whole thing here, but here’s the tantalizing section about Moss, whom I have to admit I had never heard of before:

Marjorie Jewel “Marlow” Moss (1889 – 1958), also known as Marlow Moss, was a biological realist, a recluse, a persona non grata, a phenomenon, an Amazon. She was a British, lesbian, Constructivist artist. She was also a woman, a Modernist, and a Neo Plasticist, a disciple of Piet Mondrian, and a student of Léger. She was a painter and a sculptor. She was a drag-king. She was a contemporary of Georges Vantongerloo, Jean Gorin, and Max Bill. Added to the list of adjectives could also be ‘middle class’, or even ‘upper-middle-class’, and Jewish, but then again she was also an atheist and an existentialist. Moss disrupts and subverts the narratives that could include her. This resistance to categorisation is a large factor in Moss’s obscurity; she is omitted from the histories, because she does not fit in. To date she is most consistently approached in reference to Mondrian, a context that casts her in the role of follower, or worse: imitator, a role that’s far beneath her.