BRANCHBURG – Running for re-election this year and intent on winning big, Gov. Chris Christie this afternoon claimed Senate President Steve Sweeney (D-3) as an ally on the critical issues of shared services and a two-percent tax cap, and fingered the General Assembly as an island under public sector union rule.

He reminded the crowd that Sweeney wants a shared services bill and labored hard to get the two percent cap.

By contrast, regarding the latter, “You will be shocked to hear that Speaker Sheila Oliver is holding that one up… because she wants more taxes for her and her friends and government to spend,” said Christie, hitting a theme recurring in his speech today, which praised Sweeney and panned Oliver.

Christie also ran afoul of her when he invoked her in Paterson as an “African American Speaker” without identifying her by name, seen by many Oliver supporters as a sign of disrespect.

They were just happy being here with their champion, Christie; former Gov. Donald DiFrancesco and Attorney General Jeff Chiesa – a native son of Branchburg – among them.

Riding a whopping lead over Buono, the sitting GOP governor gave them a dose of what he’s done, seeing friendly faces in the crowd, including Somerset GOP organizer Janice Fields.

“There are 20,000 fewer government employees across all levels of government,” Christie told the crammed gym.

The parking lot at Raritan Valley Community College was overflow only.

When security turned away some fans, they took advantage of Christie’s arrival and snuck into the building with the governor.

“There are a few more people here than when I came here in 2009,” the governor declared to laughs.

His budget spends less money in actual dollars than Jon Corzine’s fiscal year budget in 2008. New Jersey has seen the creation of 120,000 private sector jobs in the last three years, he said.

“We have not raised taxes when we had tax increases every year before,” Christie said.

“We had to reform our pension and benefits system,” he said, and did.

“We have to reform sick leave,” he said.

“How about from this year forward, zero means zero?” he asked.

He told the crowd he wants more shared services.

“We need to relax civil service rules to share services to save hundreds of millions,” the governor said to nods.

In an effort to increase shared services, “The Senate has actually passed the bill, and Senator Bateman here is a supporter. This is Senate President Sweeney’s bill. It sits in the general Assembly because the Assembly is a captive of the public sector unions,” the governor said.

Tom Hester, spokesman for the General Assembly, released a statement in response to Christie.

“A governor who has overseen a net 20 percent property tax hike, protected tax breaks for the mega-rich and vetoed bills to reform sick leave payouts and civil service has no credibility to criticize others, let alone those who have advocated tirelessly for the middle-class,” Hester said. “The governor should focus on his own record of near-10 percent unemployment and a 47th-the-nation ranking in economic growth.” 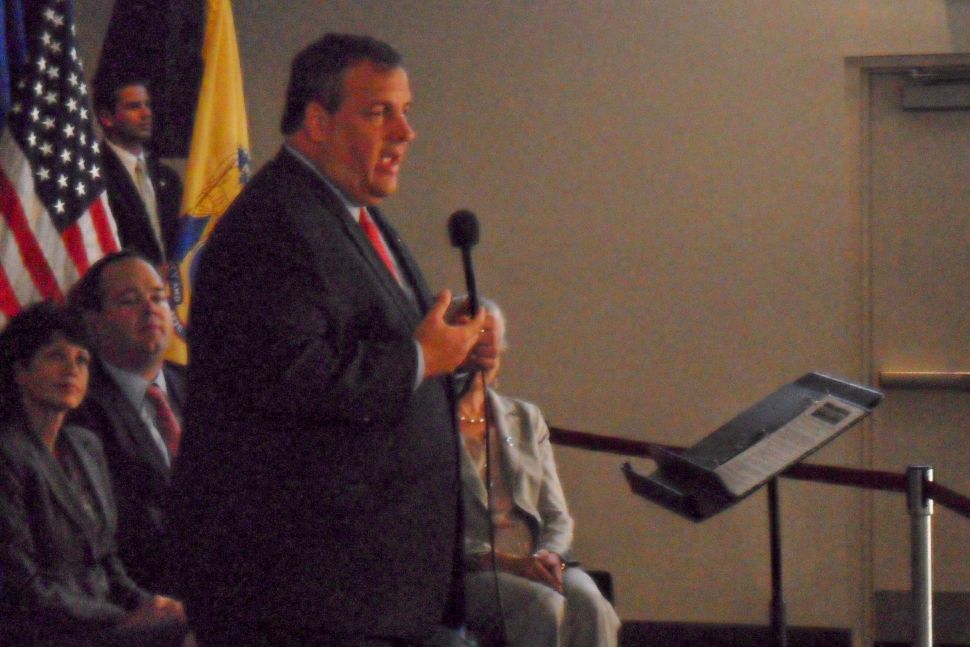