A question by PolitickerNJ.com editor Darryl Isherwood (who co-moderated with St. Peters’ Nick Chiaravalotti) put the four candidates on the subject of education, specifically vouchers.

“I have been an opponent of vouchers from the beginning,” said Fulop. “I am opposed to vouchers. I believe in improving public schools.”

The mayor started by chastising Fulop for missing school board elections until only recently.

When Healy said he too opposes vouchers, Fulop jabbed.

“He wrote a letter to the state Assembly in support of the Opportunity Scholarship Act,” the councilman said. “It is public record. Look, mayor, I did miss some elections. Part of the time I was in Iraq with the Marine Corps and he faults me for it.”

“He also didn’t vote in the 2012 school board elections,” Fulop added.

Healy said he steadfastly opposes vouchers. “I believe it drains resources from our public schools,” the mayor said. “We need to focus on our teachers and getting them the resources they need.”

Healy claimed he wrote the letter in support of the Opportunity Scholarship Act – a vouchers pilot program – because “I don’t want the kids in Jersey City to be deprived of those scholarships.” Healy added that he doesn’t believe the act will advance.

“I missed the school board election in 2012 because I was out of state and couldn’t get the absentee in on time,” Healy said.

“I demonstrate every day my commitment to Jersey City’s kids,” said Walker. “Not just at election time. The future of politics is our youth. It takes a village to raise a child. The number one thing on my platform is education. I’m actually building a learning center as we speak. That’s the difference between these guys and me.”

Walker later received appaluse from his backers for pointing out that his grassroots work in the community would give him a giant leg up on relating to troubled youth.

“They know me, they don’t know these guys,” Walker said.

Abdul Malik, a 23-year resident of Jersey City and head of a nonprofit, gnawed at Healy.

“For nine years you have only focused on the waterfront,” he said.

Fulop picked up on that later, reminding the mayor that he doesn’t vote for tax abatements for waterfront properties, then harrassed Healy on patronage troughs at city hall.

Healy said he presented a stable budget three years in a row.

“When we had the opportunity to save $3.4 million healthcare for retirees, Steve and his cohorts voted it down,” the mayor complained.

“Just open your mailbox or look at your TV screen,” he said, bothered by what he said are Fulop’s negative ads. “You’re bragging about putting the city budget online. It’s been online for three years.”

Abdul Malik went after Fulop at one point, arguing that as a councilman Fulop hasn’t sufficiently acted on his complaints.

There was no time for Healy to bask in Malik’s battering of the mayor’s chief opponent. “It’s time to come to reality,” Malik said to the mayor. “You have abused your obligation.”

“I’ve been the minority, either 8-1 or 7-2 for eight years and through hard work we have won the majority,” Fulop said. “We passed the strictest pay to play restrictions in the state and the mayor vetoed it.”

Healy later received sustained boos when he said “they like living out on the streets” in a characterization of the city’s poor in pursuit of affordable housing.  “I think it is an insult to humanity,” Malik said.

“Seventy-five percent of affordable housing is built in Ward F,” the councilman said. “That creates a tale of two cities.”

Isherwood asked the candidates whom they intended to back for governor.

“It is too early to say anything about that,” said Malik. “I am not very much impressed (with Christie). At the moment, I don’t see any prominent or visible candidates.”

Walker said, “I’m still undecided. I was hoping some other names came out of the Democratic Party. The lady Buono I need to know a little more about her.”

“I tend to always lean Democrat,” said Fulop. “I don’t know Senator Buono that well. I don’t know Govenor Christie that well. Who’s going to do better for Jersey City?”

Healy was the only one who said he supports Christei’s opponent.

“I will be supporting Barbara Buono, without a doubt,” Healy said.

The mayor said his challengers are trashing the city and burnished the big endorsements he has received.

Fulop said he gets along with Healy.

But, “The city is underperforming. It’s nice to have the endorsements of the President, the mayor of Boston or the mayor of New York City. But there is one common thread among all of them: they don’t live here.” 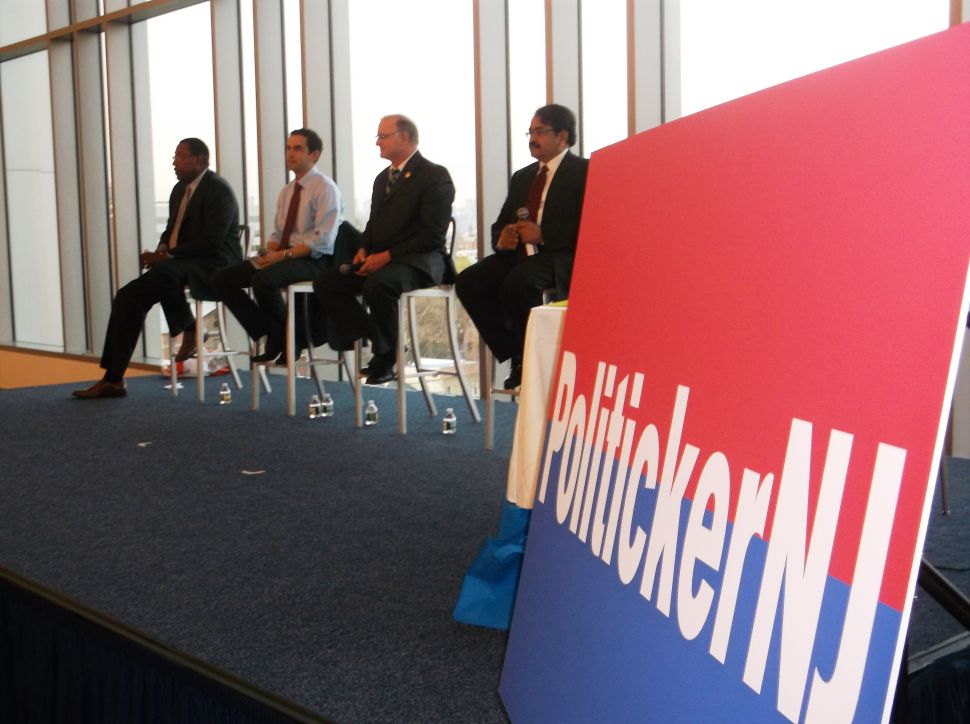