If there’s one thing that we know about the Catholic Church, it’s that homeboys in the Vatican are totally hip to the concerns of youth culture.

In their newest attempt to spread the good word amongst the PBR-drinking set, the Catholic Diocese of Brooklyn has launched a series of ads designed to appeal to native Brooklynites by referring to Jesus as “the original hipster.”

The ads feature Jesus’s bottom half clad in some grubby Messiah-style robes, with a pair of red converse peeking out from underneath them and the text “The Original Hipster” displayed over top. The Son of God: he’s just like you! He smokes Parliaments! He reads Pitchfork! He rides a fixi!

We’re not exactly sure what it is that made Jesus so hipster (he did unto others before it was cool?) but it’s hard to imagine Jesus engaging in his rousing feats of proselytization while still maintaining the requisite nonchalant hipster ‘tude. (Revised transcript of the Sermon on the Mount: “Christianity? You’ve probably never heard of it.”)

According to a press release on the Diocese’s website, the ads make reference to – what else? – an SNL Weekend Update spot by Seth Meyers, in which he joked that Converse shoes are the reason why more Catholics are returning to the Church. Now, the Church is trying to prove that Godliness and a sense of humor aren’t mutually exclusive.

“Ok, maybe Seth’s comments are a little aggrandized. But the reference is appropriately suggestive of a major problem in the Church today: that most Catholics see the church as archaic and not relevant, nor valuable, to their everyday lives,” the press release reads.

“Catholics yearn for a Church they can relate to. That is what Seth Meyers was jokingly referencing, and that is what the Catholic Diocese of Brooklyn’s new “All Faces, Everyday Understanding” marketing campaign is trying to achieve.”

Geared to show a “cooler and more welcoming side of the Catholic Church,” the ads link to the Diocese’s “All Faces” section of their website which illustrates the diversity of their congregants.

Yeah, because if there’s one thing that SNL is known for, it’s endorsing religion.

The ads can be found featured on bus stations and phone kiosks throughout Brooklyn and Queens, and while they may not succeed in getting the local hipsters to trade in boozy brunch for morning mass, they might at least spur an influx of Converse-buying amongst the local devout. WWJD? 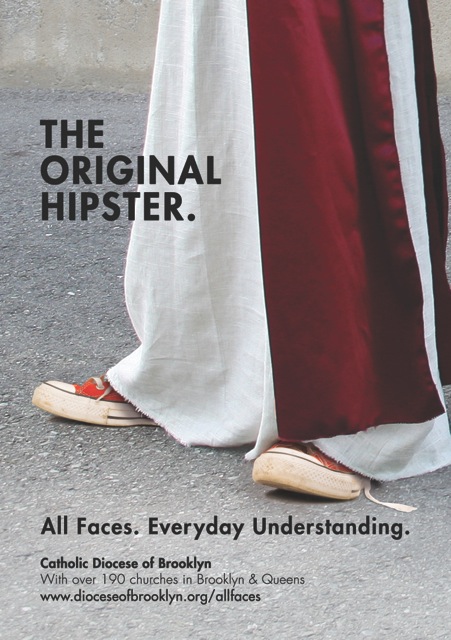