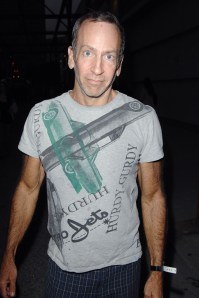 The artist Kenny Scharf was arrested in Williamsburg on on Friday night for spraying a signature snake creature on a wall, which led to, according to his Facebook page, “20 hours in 2 Brooklyn jails.”

He also said on his Facebook page, according to Art Sucks (which first reported the news), that the “Cops who arrested me were fans and wanted to talk about Exit Through the Gift Shop and even liked the tag.” All the same, he faces three class B misdemeanor charges related to making graffiti and possessing spray paint.

A spokesman at the NYPD said the arresting officers’s notes have Mr. Scharf, near the graffiti, confessing immediately. He reportedly told them, “This is art. I did it. I’m sorry.”

Update 4/23 Earlier version misidentified where the first report of the arrest appeared.