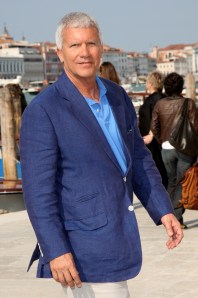 People like to say that Larry Gagosian almost never gives interviews, but recently he has granted them to various international publications fairly regularly. In the past few years he’s chatted with The Financial Times, Abu Dhabi’s The National, The Wall Street Journal, Paris Match, Le Figaro, British Vogue and Interview with Peter Brant, letting slip that his forthcoming Upper East Side restaurant will serve waffles and chili. (Really looking forward to that, for the record.)

The latest outlet to interview Mr. Gagosian is Bidoun, which billed its piece in promotional materials as “open-ended, sometimes testy, mildly informative conversation.” Actually, he seems fairly genial throughout, even if he does cut things off somewhat abruptly. (To be fair, the man had evening auctions to prepare for.) That said, there aren’t exactly any bombshells.

Among the noteworthy moments in the conversation, which was conducted by Negar Azimi on Election Day last year in New York, is that the dealer, who has never exactly been a big joiner, is now part of the board at Jazz at Lincoln Center. Here he is on that:

I like jazz a lot. I just joined my very first board. I’ve never been on a board but I just went on the board for Jazz at Lincoln Center. I’m very happy about that. Good jazz has been a big part of my life, as far as my interest in music, and… It’s kind of weird now with music, the way technology is, with downloading and iPods and electronic distribution and it’s kind of—you miss something, I think.

Also, if Mr. Gagosian can’t remember your name the next time you run into him, don’t get angry. It happens. From the piece:

I have a good visual memory. I’m good with faces, but names—I get in trouble a lot, I can’t seem to remember people. People think I’m rude. As a side comment, you know, I’m not being rude, I just kind of blank out.

He also shares a bit about his past selling posters on the streets of Los Angeles. “Did you think a lot about what people liked to put on their walls?” Ms. Azimi asks. “There must have been a fair amount of psychology—”

Not selling posters. It was just like, get them to buy it. You know—ask for twenty dollars and be prepared to take anything north of ten. It was a street business. It wasn’t about psychology.

How did the business work?

You buy the print for about a dollar, the frame would cost you two, three dollars, and then you try to sell it and make a profit. And I’d make a couple hundred bucks a night, which was a lot of money.

It’s really worth picking up a copy of Bidoun to read the full piece. (It’s the “interviews issue,” and also has fun talks with Artforum‘s editor in chief, Michelle Kuo, and Jeremy Deller, among others.) Ms. Azimi and Mr. Gagosian also talk about his friendships with the storied collector and Gagosian director Robert Shapazian, Cy Twombly and others, his love for Gorky and one of the very first artworks he ever bought: a drawing of the sea by Vija Celmins. Here he is on that:

I remember it was eleven hundred dollars, and it’s always out on loan…I knew when I bought it that I’d made a good buy, even though it was not cheap and Barry Lowen [the collector who sold it] got the proper price. I knew it would be worth a lot more.