A group of labor and Democratic Party leaders wants Governor Chris Christie to sign Early Voting legislation (A-3553) into law to improve the democratic system and increase civic engagement.

“Voting is the most powerful non-violent tool to bring about change in a democracy,” said Lewis. “We hope that Governor Christie does what is right, fair, and just, and signs this legislation into law.”

“New Jerseyans working two or more jobs to support a family understand the importance of early voting, and this bill would afford these families every opportunity to make their voices heard,” Wowkanech said. “In any democracy, we have a responsibility to establish voting procedures that suit the busy schedules of residents and we should always be striving to maximize participation in the electoral process.”

According to a release by the AFL-CIO, in-person early voting would expand voter participation and takes into account work schedules, personal responsibilities, illnesses, disabilities, child care, as well as unforeseen events such as Hurricane Sandy that prevent registered voters from participating in the democratic process.

“The Early Voting bill would give New Jerseyans 15 days before Election Day to vote early, and would extend voting hours on weekday and weekend evenings. The District of Columbia and 32 states already practice in-person early voting and it’s time for New Jersey and other states to catch up and enact commonsense steps to strengthen democracy.” the release stated. 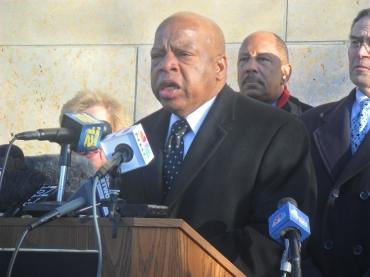