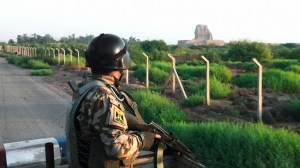 Did you like the Cyprien Gaillard show at MoMA PS1? I sure did. If you feel the same way, you might want to read Linda Yablonsky’s profile of the young artist in the new issue of T: The New York Times Style Magazine.

He talks for quite a bit of the piece. Here’s an excerpt from that section:

For me, decay is a starting point. I don’t just record it or picture it. What I’m interested in is creating a form of equilibrium within the decay. In “Geographical Analogies,” I put pictures of Paul Rudolph’s Tracey Towers in the Bronx next to Angkor Wat, a more official ruin. What interests me is this idea of extreme anachronism. You go to Babylon, one of the first cities of civilization, and in front of it you have American soldiers with the most high-tech things — lasers, night-vision goggles, these anti-mine tanks that look like fossils. That’s what first interested me about Iraq, the scandal in the archaeological community of American soldiers setting up base on Babylon and filling up sandbags with the sands of Babylon, carving their names in bricks and so on.