Two of the most colorful characters in New York City politics, Democratic State Senator Malcolm Smith and GOP Councilman Dan Halloran, were arrested earlier this morning, according to multiple news outlets. They were among six people reportedly charged, including Bronx GOP chair Jay Savino and Queens GOP vice-chair Vince Tabone, in an alleged bribery plot to secure Mr. Smith a slot to run in the Republican mayoral primary.

Mr. Halloran is known for many things in city politics, including his outspoken embrace of libertarian philosophy, disputed reports of an intentional snowplow slowdown after 2010’s infamous blizzard, and his pagan religion. Meanwhile, Mr. Smith might be best known for his zoot suits complete with suspenders and pinstripes, picking strange political battles like a press conference denouncing the rapper Dwayne “Lil Wayne” Carter, and his somewhat surprising decision to seek City Hall’s top job on the other side of the partisan aisle without actually changing his voter registration. He would have needed the support of three GOP county leaders to do so, which federal prosecutors are alleging is at the heart of today’s case.

“I have no idea,” Mr. Halloran, wearing handcuffs, told a New York Post reporter when asked if he knew why he was being arrested. “I’m sure the truth will come out once I have an opportunity to find out what’s going on.”

A lawyer for Mr. Smith told The New York Times that his client is innocent of any wrongdoing. “Malcolm Smith is a dedicated and highly respected public servant and he steadfastly denies these charges,” he argued, adding that he would have more to say after the charges are unsealed later this morning. 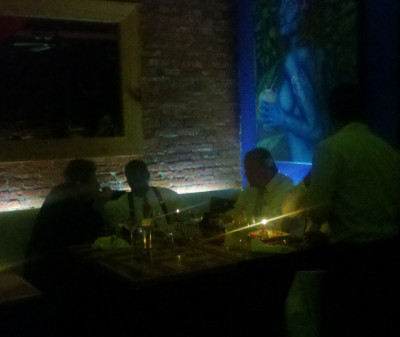