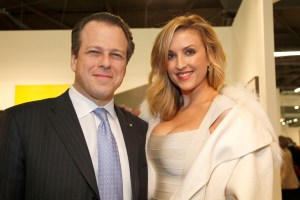 Ms. Buckingham is an actress and socialite. Her personal involvement in the art world was limited, though she did appear in an Allora & Calzadilla performance with the American Olympic team at the U.S. pavilion for the 2011 Venice Biennale. That pavilion was commissioned by Lisa Freiman of the Indianapolis Museum of Art, where Mr. Anderson worked as director and CEO between his time at the Whitney and his time at the DMA. Ms. Buckingham also appeared in the movie Half Baked, where her character is attacked by Dave Chappelle with a piranha.

The split was announced via an email sent to close friends, and also appears on Ms. Buckingham’s website. Full text below.

A letter to family, friends, and colleagues from Jacqueline Buckingham and Maxwell Anderson:

It is with ongoing love and deepest mutual respect that we share the news of our legal divorce.

Although a legal marriage bond is behind us, we are moving forward with new vows as dedicated partners in parenting, committed champions of each other as individuals, and strong supporters of each other’s careers, dreams, and life’s work.

For nearly 20 years, we have worked as a devoted team, and are extremely proud of our marriage and our two children together. It is our sincere goal to honor our marriage and family, and allow what was built together, to continue to thrive.

Max will continue as director of the Dallas Museum of Art. Jacqueline is working on a book on this positive approach to evolving relationships and her own divorce process titled Separating into Wholeness: Revolutionary Relationships & Evolutionary Families. She is embarking on a book series and plans to teach and speak across the country. More information found at http://www.jacquelinebuckingham.com.

In writing this letter we are seeking not condolences but best wishes on life’s journey ahead.