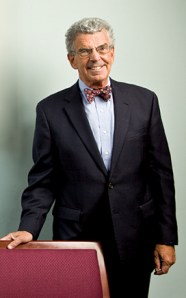 Here’s a bit from MICA’s extensive news release on his tenure:

“Since 1978, MICA’s enrollment has more than doubled; the size of the campus has increased tenfold; the endowment has grown by more than 25 times; three research centers have been created; and 18 undergraduate and graduate academic programs have been added.”

He was also responsible for securing some $100 million in outside funding during his years in office.

A search committee of students, faculty and trustees will work to locate a successor to Mr. Lazarus.