Governor Chris Christie’s re-election prospects remain strong, but the Monmouth University/Asbury Park Press Poll also finds a slight erosion of his post-Sandy job ratings.  On the campaign front, New Jersey is divided as to whether the governor’s views on hot button social issues are out of step with his constituents – which is a key line of attack from his Democratic challenger.

Currently, Gov. Christie earns a 63% approve to 26% disapprove job rating among all Garden State residents.  Among registered voters, his rating stands at 65% approve to 26% disapprove.  In February, his job approval rating was 70% to 17% among all residents and 70% to 16% among voters.  This decline has occurred across every demographic group, but he still earns majority approval from Republicans (86%), independents (64%), and Democrats (52%) alike, as well as from the state’s public workers (54%).

Nearly 6-in-10 (59%) registered voters say that Gov. Christie deserves a second term, down just slightly from his February support level (63%).   Just one-third (34%) say it is time to put someone else in office and 7% are not sure whether the governor merits re-election.  The slight drop in the governor’s overall re-election support comes mainly from independent voters – standing at a still-solid 59%, but down from 68% in February.

State Senator Barbara Buono, the probable Democratic nominee for governor, has been focusing part of her campaign message on the charge that Chris Christie’s views are out of step with most of New Jersey.  On government spending – an issue which is a centerpiece of the governor’s own campaign – a majority of residents (55%) say that Christie’s views are in line with most of his constituents, compared to 36% who say he is out of step on this issue.  New Jerseyans are divided, though, on whether the governor sees eye to eye with them on property taxes – 44% say his views are in line with the state and 45% say they are out of step.

“There may be some hay to be made over possible gaps between New Jersey’s take on these issues and Chris Christie’s own views.  However, social issues are not particularly relevant for swing voters in the upcoming election.  Property taxes, though, may be a different story, which could explain the governor’s renewed call this week for a property tax credit,” said Patrick Murray, director of the Monmouth University Polling Institute.

On the issue of abortion, 42% of New Jerseyans correctly identify Gov. Christie’s views as basically pro-life.  Another 25% say he is pro-choice and 32% are unsure.  Among the New Jersey public, a majority of 54% consider themselves pro-choice compared to 38% who are pro-life.

On the issue of same sex marriage, 48% of New Jerseyans say Gov. Christie opposes allowing gay and lesbian couples to marry legally.  Another 23% believe he favors same sex marriage and 30% offer no opinion.  Among the New Jersey public, a majority of 59% favor legalizing gay marriage and just 31% oppose it.  This result marks the highest level of support for same sex marriage in ten years of this specific question being asked on New Jersey polls.  The prior high was 52% favor to 34% oppose in February 2012.

The poll also revealed an interesting convergence between an individual’s beliefs and their take on the governor’s views relative to whether they feel he is in line with most of New Jersey.  Among those who side with the majority on these issues and correctly identify Christie’s positions, two-thirds say that the governor’s views are out of step with most New Jerseyans – 66% for abortion and 67% for same sex marriage.  However, if an individual feels that the governor shares their own views on these issues – regardless of which side of the issue they agree with – they are more likely to feel that the governor’s – and presumably their own – views are in line with majority opinion.

Specifically, New Jerseyans who take a majority pro-choice view of abortion and say Christie feels the same are more likely to see the governor as being in line with his constituents on this issue (55%) rather than out of step (21%).  Similarly, 51% of those who favor same sex marriage and think the governor shares their opinion say that his views are in line with New Jersey, compared to just 15% who say they are out of step.

The same pattern is true, though, when both the individual and the governor are in the minority.  Over half (51%) of pro-life New Jerseyans who also see the governor as pro-life say that these views are actually in line with most of New Jersey, compared to just 30% who say they are out of step.  Similarly, nearly half (48%) of New Jerseyans who oppose gay marriage and say the governor feels the same inaccurately see these views as being in line with the state majority, compared to 35% who say they are out of step.

The governor’s office recently sent a mailing to Central Jersey residents that included a survey asking them to grade his performance on a number of issues.  As a service to the administration, the poll replicated two of the questions from that survey to provide a representative statewide evaluation.  When asked to grade the governor on his “efforts to rebuild our state in the aftermath of Superstorm Sandy,” 3-in-4 New Jerseyans give Christie an A (44%) or B (32%).  Another 15% give him a C and fewer than 1-in-10 give him a poor grade of D (4%) or F (4%).

President Barack Obama holds a 55% approve to 42% disapprove job rating among registered voters in New Jersey.  This marks a decline from the 60% to 33% voter rating he earned in February, which is similar to the size of the drop in Christie’s job rating over the same period.

The Monmouth University/Asbury Park Press Poll was conducted by telephone with 806 New Jersey adults from April 11 to 14, 2013.  This sample has a margin of error of+ 3.5 percent.  The poll was conducted by the Monmouth University Polling Institute and originally published by the Asbury Park Press and its sister publications (Courier-Post, Courier News, Daily Journal, Daily Record, and Home News Tribune). 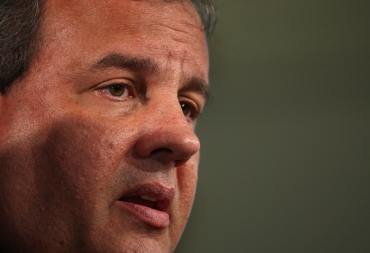