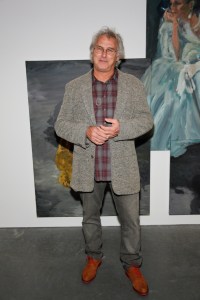 Canadian art show at MASS MoCA heads to Canada. [The Globe and Mail]

“The heirs of a French art dealer are demanding that a Norwegian museum return one of its featured paintings, a Matisse that was confiscated by the Nazis in 1941 in Paris. The family of Paul Rosenberg, a prominent Parisian gallery owner, has documents showing that the painting, known as ‘Woman in Blue in Front of Fireplace,’ or ‘Blue Dress in a Yellow Armchair,’ was among those in the possession of the Luftwaffe chief Hermann Goering in 1942. The documents include a long list, stamped with Goering’s initials, itemizing artworks taken from Mr. Rosenberg’s vault.” [NYT]

Francis Bacon’s portrait of Peter Lacy is for sale at Sotheby’s in May. [The Guardian]

Eric Fischl has written a memoir that is due out May 7. It includes a section set in the 1980s in which he attends a party with waiters offering “glasses of Champagne [and] a choice of cocaine or heroin.” [Page Six]

A bunch of Warhols will be shown in a free exhibition at the Scottish Parliament. [BBC News]