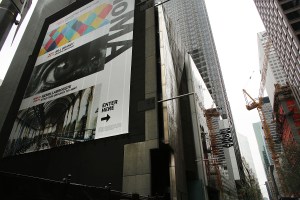 “Richard Meier, Thom Mayne, Steven Holl, Hugh Hardy and Robert A.M. Stern are among the prominent architects who on Monday called for the Museum of Modern Art to reconsider its decision to demolish the former home of the American Folk Art Museum.” [NYT]

“The landlord said to cover the vagina in some way,” said ROX Gallery director Emerald Fitzgerald, who slapped a sign on the glass window. “He said he wanted to protect the community.” [NYP]

Here are the finalists for the BP Portrait Award. [The Guardian]