On a cold and rainy Friday evening in late February, dozens of people crowded into the back room of Chelsea’s Martos Gallery during its opening reception for Aura Rosenberg’s new show. They stood around a large rectangle of black velvet, waiting for a performance organized by the artist to start. Eventually a man and woman walked in. They were young and lithe and naked.

“Oh no,” someone groaned. People began shooting photos and videos.

The pair took turns using a brush to paint the sides of their bodies and faces with white paint and then gingerly helped each other down onto the velvet. They made an imprint of their bodies on the fabric such that they appeared to hold each other closely. They were dignified and graceful, and they left to roaring applause, having completed the final one of Ms. Rosenberg’s paintings of sexual positions based on zodiac signs. The other 11 were hanging on the walls.

Public painting performances—many of the naked variety—are back. Depending upon the quality of execution, they run the gamut from the stuff of hopped-up Burning Man-style creatives, the kitschiest of the kitsch, to events reminiscent of the über-elegant French artist Yves Klein, who in 1960, clad in a tuxedo, famously directed naked ladies covered in his trademark blue to smear themselves on canvas to the sound of a string quartet. But regardless of their outward tone, these latter-day versions share a common desire to counteract the deadening trend of art’s digitization and underscore the pleasure of experiencing it in the flesh.

Two days after Ms. Rosenberg’s performance at Martos, the young Thai artist Korakrit Arunanondchai could be found at the Court Square gallery in Long Island City wearing only a pair of boxers as he painted a yellow figure atop a wall of T-shirts. After he finished, he smeared paint all over his body and began wildly grinding himself against canvases. People were behind these, sticking their hands through holes and hugging him as he grooved. Meanwhile, his collaborators, Donna Huanca and Melissa Ip, were using blow-dryers to dry T-shirts that were covered with paint—each had been worn by another man who was rubbing himself in a puddle of paint on the ground.

Travis Boyer hosts indigo-dyeing parties, communal festivals in which he invites people to strip down or bring clothing to douse in vats of the liquid. In late December, Ei Arakawa and Nora Schultz coated mannequins in paint and then tossed and spun them about to make prints before a large crowd at Reena Spaulings.

At the same gallery back in 2010, K8 Hardy was an early progenitor of the trend with her show “New Paintings.” Fans arrived to find the gallery empty. Only when Ms. Hardy arrived did it all make sense: the painting was on her unclothed body, which had been adorned by professional body painters with faded jeans and a white V-neck blouse. Like any valuable painting, she was accompanied by two stern security guards.

A related trend is the public painters, who lift their brush before an audience, performing the creation of their paintings (a move once reserved for clownish figures like Bob Ross or the postwar Frenchman Georges Mathieu), often with the help of collaborators.

There’s Ragnar Kjartansson, who spent the entire 2009 Venice Biennale holed up in the Icelandic Pavilion learning how to paint, nursing beers as he made copious depictions of a patient Speedo-clad model, and the British artist Merlin Carpenter, who toured galleries from about 2007 to 2009 for a series of exhibitions called “The Opening,” arriving during the crowded receptions to scrawl slogans like “DIE COLLECTOR SCUM” and “BANKS ARE BAD” on his canvases.

Even Nas got into the act at Art Basel Miami Beach in 2011, making a painting onstage during one of his concerts. It was auctioned on the spot for charity to artist Rashid Johnson.

This practice reached a delicious apotheosis early last month when the Berlin duo Flame invited a scrum of art students to paint atop large iPhone-shaped supports during their opening at the Real Fine Arts gallery in Greenpoint. As they worked in the dark gallery, video projections impeded their view, and when the lights were turned on after a half hour of work, the panels bore messy abstractions.

As Flame’s iPhones and projections underscored, art is increasingly slipping into digital realms, reproduced across blogs and online sales platforms, and in the case of today’s most high-profile paintings, engineered through advanced technical means and expanses of computer-mediated labor. These live performances rebel against slick digitization and restore the raw thrill of being in a gallery, seeing art happen. And they counteract what critic Jerry Saltz recently declared “The Death of the Gallery Show,” as a result of globalization, proliferating art fairs and digital technology. You really have to be there.

Kim Gordon, the Sonic Youth bassist who also makes art, argued 30 years ago that people go to concerts to see performers “go through the motions and emotions of sexuality,” that they “pay to see it, to believe that it exists,” a stance echoed by Beyoncé in her recent HBO documentary, Life Is But a Dream, in which she said that people go to concerts “to live through [whatever] performer is onstage.” As artworks and the galleries that house them continue to expand, waging a mutually destructive space race, I want to believe that art can be intimate and humble and mysterious—a magic trick (or even just a clever, goofy gesture) conjured right in front of me. I know I’m not alone.

The single best painting performance I’ve seen in the past few months was one that involved no wet paint at all. It took place midway down the rotunda of the Guggenheim late one Friday evening. While giving a peculiar tour of the museum’s “Gutai: Splendid Playground” show (excerpts from one sequence, of “baby Gutai,” appears below), Mr. Arakawa (the leader) and one of his collaborators, the German painter Jutta Koether, noted that many of the paintings there were made quickly, as performances. In keeping with that spirit, Ms. Koether suggested that the tour group engage in some of what she called “fast looking.” She and Mr. Arakawa directed the people in their group to sprint down the spiral, stopping at each painting and turning to look before darting off to the next one. One by one they did so, laughing along the way. 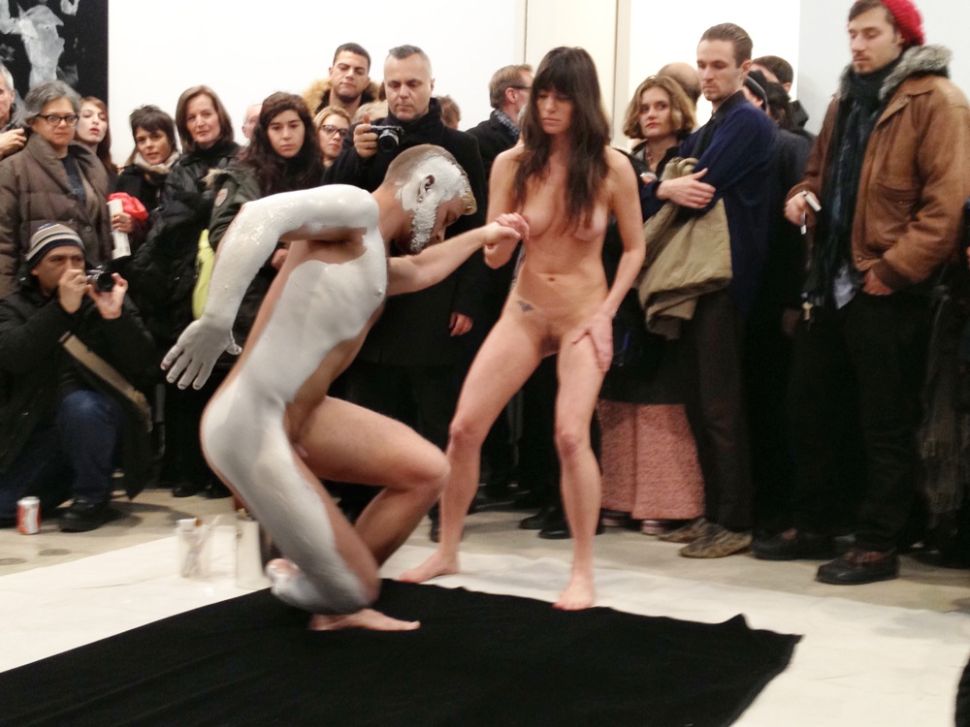