Nate Thayer recently became a hero to an entire generation of underappreciated, underpaid–and more importantly often unpaid–journalists just scraping by when he made public emails from an Atlantic editor asking him to work for free.  With even our most highly remunerated writers, including Scott Turow, speaking out about their writing being pilfered, Thayer struck a chord.

“We unfortunately can’t pay you for it, but we do reach 13 million readers a month,” an Atlantic.com editor, Olga Khazan, emailed him after reading a piece that Thayer had already written elsewhere.  Thayer turned down the offer, instead publishing verbatim his email correspondence with Khazan on his blog as the story went viral.

That earned him an invitation to appear on HuffPo TV.

Thayer was none too unhappy for the opportunity but says he told a producer with the program:

I would be happy to appear on the show, but let’s be frank here. You guys are the very poster child of using unpaid writers as the equivalent of slave labor as the very core of your business model to provide news to news consumers. If you are under any remote misimpression I won’t be required to mention, and probably focus rather vigorously on, that fact, you would be mistaken.

The Huffington Post is perhaps the most logical example and proof of the merits of why I refused the Atlantic’s request in the first place, and you should be aware that you would very mistaken to think I would not raise that issue for discussion on your show. I would be both happy to appear on your television show and I most certainly will raise the topic of the Huffington Post being perhaps the starkest example of the type of media organization I refuse to enable.

The producer responded, according to Thayer:  “That is a good point. Let me recheck and run this by my bosses and I will get back to you in a few minutes.”

Thirty minutes later Thayer was disinvited from the show, receiving this text:  “Thanks much for making time to talk. Sorry this one isn’t going to happen, but I’ll reach out again for others stories. I’ll just say good luck.”

Thayer blogs about it here, tastefully adding the subhead: “You Are Lucky to be Our “House Negro” or You’d be Picking Cotton in the Fields Like the Rest of  the Slaves”

Meanwhile, if you are unemployed writer, Jim Romenesko reports, Berkeley has just the job for you—if, like the Atlantic and Huffington Post, you are willing to write for free.  But not anyone:  Working for free is not enough.  They would prefer if you have “a solid publications record from such outlets such as National Geographic, Outside Magazine, New York Times [and] Smithsonian.” One can apply here.

Disclosure: Murray Waas has previously worked for Atlantic Media as the investigative correspondent for National Journal, during which time he also contributed to the Atlantic; he has also written for the Huffington Post. 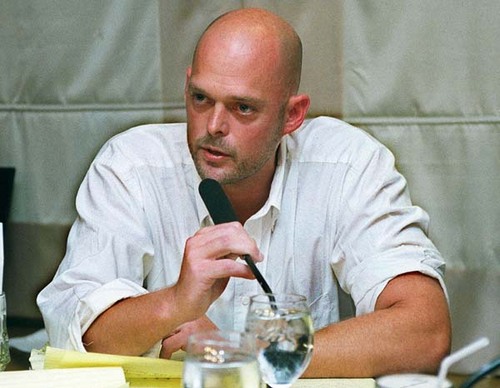 Filed Under: Media, Off the Record, Nate Thayer