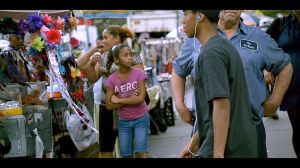 The morning after I arrived in New York last month for a week’s visit—the city had been my longtime home until three years ago, when I moved to Europe—I went to the Metropolitan Museum to see the extraordinary new video Street by James Nares. A set of continual tracking shots of New York life, it was shot from a moving car, using a technique whereby each person captured on camera becomes a sort of extreme slow-motion three-dimensional Everyman—a flicked cigarette is as poetic in its eternal arc as flapping birds. A dazzling hour of audio-visual meditation, it is particularly suited to anyone who’s just disembarked from a plane and wants to plunge immediately into the city. Mr. Nares told me that he wished he had made such a video when he first arrived here, back in the mid-1970s. Seeing Street prompted me to take the city’s pulse, note its shifts, lament what’s been lost in the time since I lived here.

It seemed appropriate to do so in the pages of The Observer, my lifeline to New York when I found myself stranded in Milan in the 1990s, laboring as editor of the magazine Flash Art. I would sneak off to the café every morning with my precious copy of the paper and sit with the inevitable espresso, sipping with wry regret at the news of all-too-distant Gotham, until my furious boss would burst through the door shouting in his apoplectic and comically accented English, why I was not at work.

The excitement of this city still rings out with the very first announcement of its name at Heathrow, where I was thrilled to hear, among a request for passengers to present themselves to the departure desk, “Mr. Brice Marden, Mr. Marden please.” Reading on the plane of the recent death of Mayor Koch, I realized that many of my favorite friends in the city belong to that last great generation that was already living there when Mr. Koch took over in 1978, the “pre-Koch” posse of urban warriors who knew downtown when it really was “down” in all its now-unimaginable gorgeous poverty.

I stayed with one of them, the fabled artist Jan Frank, in his untouched loft on Bond Street, one of those few remaining absolutely authentic spaces, as far from the real estate agent fantasy of “artist’s loft” as a cupcake is from a crack vial, a place from which to step out and survey the ravages of gentrification on the surrounding block. Jan was busy mounting a group exhibition about the 1970s for the gallery White Box, and his neighbor from across Bond came over the cobbles—the impeccable veteran Minimalist Stephen Rosenthal, with his elegant striped canvases from that era and tales of the artist’s co-op in which he’s lived forever. Joseph Kosuth used to be there way back in the ’60s, and they still have the now-elderly art student once shot by Chris Burden as part of a performance, the sort of celebrity who would hardly past muster at the Herzog & de Meuron condo next door.

Best of all are tales of Doug Ohlson, last of the old-skool boozer abstractionists, who used to be so drunk he would get stuck in the fancy tree installed outside by developers, jammed in the unexpected branches with his bottle, and who came to his end on the pavement outside the latest luxury shoe boutique. This was Carl Andre’s great drinking buddy, the man he is said to have called after Ana Mendieta fell to her death—try telling that to the sippers of “locally sourced milk” at The Smile.

The particular sense of loss and promise that seems uniquely generated by Manhattan is the source of much of its cultural mythology. The long battle between ancient and modern is more acute here than anywhere else, the lust for destruction, for immediate profit, overwhelming heritage. Thus I had to note, with a shock akin to a missing limb, the shuttered door of the Grandaisy Bakery on Sullivan Street and, even more brutal, the transformation of Gino into a shiny emporium selling spotlit gourmet cupcakes, an extreme contrast with the osso buco chiaroscuro and shuffling Sicilian waiters of the good old days. I peered for the faintest trace of that famous zebra wallpaper, any slightest vestige of that historic interior—gone, only its echo at Royal’s townhouse on Archer Avenue remaining now.

Thank the primeval Lords of Unrule that at least the Subway Inn around the corner remains unchanged. There a stiff bourbon mit chaser ushered out any lingering miasma of nostalghia, for how easily at that notoriously sticky beer-stained counter could one become like that perfect elder WASP recently met, now in permanent exile on his Newport estate, who explained to me why he could never return to New York, had not set foot in the place in over 50 years: “You see I knew the city in its very greatest years, in the ’50s and early ’60s, so it would be simply too devastating for me to ever have to see it as it is today.”

In the city’s museums, too, I felt a sense of loss. In the Met’s wondrous new American wing, I was dismayed to discover that the great painting The Quartette by my famous relative William Turner Dannat, an imposing salon piece that used to dominate a wall, had been stripped of its period frame and stuck in open storage, where one can contemplate its fall from grace through glass like some once-proud beast in zoo captivity. I was heartened, though, at the Frick, by an impeccable exhibition of Impressionist prints and drawings from the Clark Art Institute, including some gathered by Robert Sterling Clark himself in Paris after WWI, like works from the Degas studio sale that he attended.

The contrast between the pleasures of the Frick and MoMA down the road could not be more extreme, the latter having seemingly turned into a processing machine for mass tourism with a density of crowds and confusion to rival Toys ‘R’ Us at Christmas, vast packs of wilding youth barely checked by a “security” force more suited to a high-security prison. MoMA makes clear what happens when a museum becomes an obligatory destination for every out-of-town visitor and every grade of schoolchild, a sort of object lesson in the frightening furthest limits of “democracy.” (Admissions figures at MoMA are surely significant, for even if not everyone pays the full $25, the sheer millions of visitors must add up to a pretty serious annual total.) The main activity at MoMA would seem to be texting—every gallery is dense with shoe-gazing teens on their gadgets, tapping out aphorisms to each other, a dense mass of incessant typing through which it is almost impossible to clear a path. Yet among all this horror, the curatorial chops have never been better—there was a cracking small show on genius junkie designer Robert Brownjohn and his Goldfinger title sequence, and some clever soul had at last taken Pavel Tchelitchew’s painting Hide and Seek out of storage and installed it at the top of an escalator, where it gathers as many admiring crowds, and quite rightly, as when it was the museum’s No. 1 attraction.

After battling through tour groups and what appeared to be entire Midwestern football teams enraged on Red Bull, I emerged on the top floor to almost certainly the greatest exhibition ever assembled on the history of nonobjective art, “Inventing Abstraction.”

DESPITE MY PENCHANT for New Yorkers of a certain battered vintage and my regret for the inevitable destruction of so many of my own landmarks (where are you now, Tepper auction house; come back, Spring Street Books), my instinctive suspicion of today’s jeunesse dorée was allayed by an impeccable dinner hosted by my friends Sage Mehta and Michael Robinson. In an Upper West Side penthouse duplex were gathered a fresh intellectual cabal, the editors of The American Reader. Witty, caustic, Ivy League, preposterously over-informed and entirely under 30, I found them utterly impressive, especially as they had never so much as heard of the Manhattan literary magazine Open City, of which I was editor at large for some 20 years and whose demise was so relatively recent.

Yes, some of the table banter was blushingly self-conscious in a manner akin to the Worst of Simon & Garfunkel—“Can analysis be worthwhile? … is the theater really dead?”—and yes, we did actually start discussing Franny and Zooey at one point, but I liked the retro whiff of such earnestness.

All seemed to be going well until I mentioned my personal time machine for retrieving the real old New York, which included my recent visit to a triple bill of 1933 movies at Film Forum, happily packed with those cinéastes of yesteryear loudly opening their Tupperware boxes of food, rustling wrappers, discussing Nova Pilbeam. I also mentioned the magical underworld of the city bus, now seemingly as antiquated as horse-drawn carriages, which plunges one back into a New York as rough and tough as The Panic in Needle Park, a sort of mobile hospital unit filled with those delicious dregs of the city one used to be able to see on 42nd Street.

Maybe it was my description of one fellow crosstown rider as a “monster” that occasioned a sudden explosion of fury from the previously engaging young editress at my side. Hence I was roundly denounced for being “privileged” in my assumptions, not only as a white male but as a wealthy heterosexual member of a dominant class, though how she deduced this from my mere presence remained a mystery. My passing reference to my own personal cowardice as my being a “pussy” was also roundly condemned, indeed was brought to a sort of kangaroo court as my assailant announced, “There are four women around this table and none of them will allow your use of such a term,” a condemnation of which the others seemed less certain. In the end, somewhat shell-shocked, I came to realize that this was just another sort of induction into another sort of élite, the latest equivalent of frat hazing, and that I too could now imagine what it would be like to have just graduated in semiotics at Brown or gender studies at Wellesley, a rather thrilling sense of almost cross-dressing, the decades falling away from me to reveal the eager intellectual neophyte I secretly still remain.

Inspired, exhausted, practically physically transformed into an entirely righteous 22-year-old radical bluestocking, I staggered back to Newark Airport from a week in surely still the greatest city in the world, swinging my complimentary tote bag from designer Stefan Sagmeister’s show at the Jewish Museum, on which he’d emblazoned, NOW IS BETTER.