An organization dedicated to putting Gov. Chris Christie’s political career on ice will go up on television tomorrow for the first time this campaign season.

501-(c)4 group One New Jersey’s spot will run as a six-figure, state-wide cable buy for the next few weeks, and is being supplemented by an online ad buy.

The :30 second spot – “Real” – can be viewed at OneNewJersey.org/Real.

“Governor Christie touted a Jersey Comeback. But, contrary to his claims, we’re clearly falling behind,” said Joshua Henne, spokesman for One New Jersey. “Our first commercial seeks to serve as a wake-up call to Trenton that there’s a huge gulf between the rhetoric being espoused and the reality on the ground. The sad truth is that New Jersey is falling further and further back due to the wrong-headed policies and misplaced priorities of the past few years. No amount of hype or hyperbole can hide the fact that middle-class and working families are hurting, while millionaires and powerful interests get special treatment – and New Jersey ends up worse-off, as a result.” 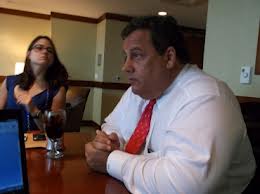