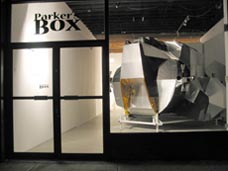 Williamsburg gallery Parker’s Box will be closing their current location after their next show, which will also be the gallery’s 100th exhibition.

Alun Williams, the director of Parker’s Box, announced the news in an e-mail Tuesday evening:

“As Williamsburg becomes clothing boutique-land by day and party-land by night, it’s feeling less and less appropriate to be trying to survive here as any kind of gallery, and at the same time, we’ve become increasingly disillusioned by what ultimately is a conventional commercial gallery formula.
“So we’re hoping to re-emerge elsewhere with a fresh, new model – one that will also allow us to have more time for our own work, which is increasingly becoming an ever more urgent priority.”

The note echoes dealer Nicole Klagsbrun’s recent decision to close her space in Chelsea because “I just don’t want the gallery system anymore.”