TRENTON – The Senate Budget Committee hearing Monday with Treasurer Andrew Sidamon-Eristoff followed up along the partisan lines set down last week during his appearance before the Assembly budget panel.

Chairman Sen. Paul Sarlo, for instance, pointed to the projections by the Office of Legislative Services of a $637 million revenue shortfall for the rest of fiscal year 2013 and through fiscal year 2014, as well as the proposed budget’s reliance on uncertain revenues such as $166 million in affordable housing monies, $120 million as part of the proposed Lottery privatization, and $180 million in online gaming revenue.

“The problem starts with the Administration’s revenue projections for the rest of the current fiscal year 2013 – they are clouded with doubt and uncertainty,” he said.

However, Republican Sen. Anthony Bucco said in opening remarks that the governor has provided a budget that keeps the state headed in a responsible fiscal direction, and as an example, he cited the Transportation Trust Fund, a $1.6 billion plan that next fiscal year does not rely on bolstering through the general fund.

“If you disagree” with that approach, “tell us how you would fix it,’’ Bucco said. “Whose pocket do we take it from?”

Yet Sarlo in his opening pointed out that all things considered, “We must recognize we are potentially out of balance,’’ in light of OLS’ projections.

He also took issue with school aid figures, saying many districts and legislators felt misled into believing no district would see a decrease, when in fact due to reductions in aid for debt service some 200 districts will see less.

Sidamon-Eristoff said in no way was he belittling the impact on some schools, but he reiterated that aid, inclusive of formula aid, will increase $97 million, the largest amount in history. He said, however, that many districts will experience an increase in debt service for school construction costs.

In response to a question from Sarlo, Sidamon-Eristoff explained that under this administration, school assessments are set in December, and Sarlo pointed out that as a consequence, any savings achieved as a result of refinancing are not passed on to school districts.

“Quite frankly,’’ he said, “suburban school districts have been shortchanged.”

Sen. Linda Greenstein questioned the treasurer about recent Standard and Poor’s analyses that found the state’s fiscal year budgets for 2013 and ’14 structurally unbalanced.

Sidamon-Eristoff said that in part the industry as a whole may have felt a little overexposed in the early 2000s, which has led in general to a “dour’’ view of circumstances, but he said he felt “it was difficult to conclude how a rating agency could conclude that New Jersey’s situation is less solid today than it was four years ago.’’

Since that time, he said, the state has reformed its pension and benefits system as well as interest arbitration.

Greenstein also pressed the Treasury Department on why OLS feels Treasury has been less than collaborative on budget and revenue matters.

Their range of difference amounts to 1 percent or even less of a budget that exceeds $30 billion.

Yet Sarlo concluded the hearing by reiterating that he felt that Treasury has been less than forthcoming as they sparred at the end over how the administration calculated online gaming revenue for FY14 of $180 million. 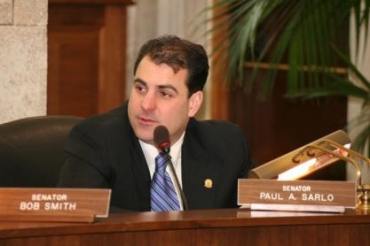