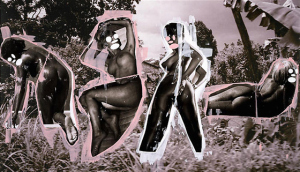 Today the United States Court of Appeals for the Second Circuit ruled that Richard Prince largely did not infringe on photographer Patrick Cariou’s copyright in his “Canal Zone” series of paintings, for which Mr. Prince appropriated Mr. Cariou’s photographs of Rastafarians in Jamaica. The decision overturned an earlier one in a district court in March 2011, which ruled that Mr. Prince must destroy the 30 works that were said to infringe.

The Hollywood Reporter reports that the three-judge panel largely ignored Mr. Prince’s testimony that he’s just trying to make art that looks cool and has no message. The takeaway from the appeals court was that Mr. Prince’s works clearly transform Mr. Cariou’s. From the decision:

Where Cariou’s serene and deliberately composed portraits and landscape photographs depict the natural beauty of Rastafarians and their surrounding environs, Prince’s crude and jarring works, on the other hand, are hectic and provocative.

Of the 30 disputed works, the appeals court ruled that 25 did not infringe on any copyright. The district court will decide on the remaining five works.