The news comes after video aired on ESPN of Rice physically and verbally attacking his players, as well as demands from New Jersey lawmakers and other state officials for the university to immediately fire the coach.

“Rutgers University has a long and proud history as one of the nation’s most diverse and welcoming academic institutions. Coach Rice’s abusive language and actions are deeply offensive and egregiously violate the university’s core values.

“When video excerpts of basketball practices were reviewed last fall by Athletic Director Tim Pernetti, he immediately notified me and sought the advice of internal and outside counsel.  The university hired an independent investigator to look into this matter thoroughly. Based on the external investigator’s findings and recommendations, Tim and I agreed that Coach Rice should be suspended, penalized $75,000 in fines and lost salary, ordered to undergo anger management counseling, and put on notice that his behavior would be closely monitored. Tim Pernetti also made it clear to Coach Rice that there would be zero tolerance for additional infractions. Tim kept me fully apprised and I supported his actions.

“Yesterday, I personally reviewed the video evidence, which shows a chronic and pervasive pattern of disturbing behavior. I have now reached the conclusion that Coach Rice cannot continue to serve effectively in a position that demands the highest levels of leadership, responsibility and public accountability. He cannot continue to coach at Rutgers University. Therefore, Tim Pernetti and I have jointly decided to terminate Mike Rice’s employment at Rutgers.” 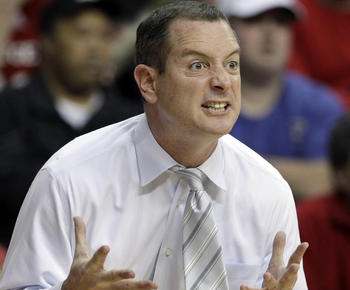