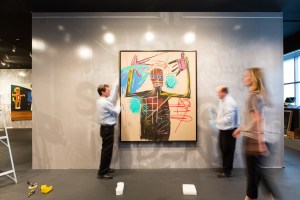 There’s something jarring about seeing the walls of Sotheby’s gleaming Upper East Side headquarters covered in graffiti.

It isn’t actual graffiti, of course, in Sotheby’s second-floor gallery, S2—it’s photographs of graffiti. And it isn’t by just any graffiti artist. With the paintings and drawings in its new exhibition “Man Made: Jean-Michel Basquiat,” Sotheby’s is betting that, even after the high attendance—some 2,000 people on a weekday—at Gagosian Gallery’s recent exhibition of the street artist-turned-art star, New York isn’t Basquiat-ed out. And if the line stretching from Gagosian midway down 24th Street on April 6—the day that show closed—was any indication, it’s right.

“I have to say it, to walk into Gagosian’s show at the opening, there was a buzz that I have not seen” before, said Alexander Rotter, head of contemporary art at Sotheby’s. He and Miety Heiden, senior vice president and senior specialist in contemporary art, who organized the Sotheby’s exhibition, gave Gallerist a sneak peek at the show while it was being installed. “I’m thinking we’re going to create that buzz too.”

Of course, this is Sotheby’s, and as much as the new show may attract crowds, it’s aimed squarely at the market. Basquiat’s work has been shattering records at auction recently. The Sotheby’s show opens May 2, and it will still be up in two weeks when Christie’s, its archrival, puts on the block a 1982 painting of two totemic figures with dripping, masklike faces. That painting, consigned by Tiqui Atencio and estimated at between $25 million and $35 million, is poised to break the current Basquiat record of $26.4 million, set at Christie’s in November for a painting of a fisherman.

The Sotheby’s show—31 works, 80 percent of which are for sale at prices as low as $20,000 (for works on paper) and ranging up to $3.6 million to $15 million for paintings—has been in the works for a year, and it raises the question, especially with regard to pieces closer to that $15 million mark, of why Sotheby’s would mount an exhibition rather than put these pieces up for auction, where it takes just two avid bidders to send an artwork into the stratosphere. The answer: discretion. “In a private-sale scenario,” Mr. Rotter said, “it doesn’t get screamed to the world.” An exhibition—one that falls during the major biannual contemporary art auctions and the popular Frieze art fair on Randall’s Island—got the house pieces it wouldn’t otherwise have had access to, Ms. Heiden said. (Sotheby’s will include one Basquiat canvas, estimated at $7 million to $9 million, in its May 14 Contemporary Art Evening Auction.)

As lavishly as Mr. Rotter praises the Gagosian show—“one of the most spectacular shows that I’ve seen”—he said the Sotheby’s exhibition “is going to feel much more cohesive.” As opposed to Gagosian’s traditional white-box approach, the auction house has gone heavy on atmosphere, with those large photographs of graffiti and dramatic midnight blue walls.

“It’s really like ’80s music,” said Mr. Rotter. “We’re trying to make a good record; Larry’s doing a compilation of best of. Sometimes the good record, even though it doesn’t have the great songs, is the better listening experience.”

The two exhibitions have at least one thing in common: Basquiat’s old pal Glenn O’Brien, who led a tour of the Gagosian show and has written a rollicking essay for the Sotheby’s catalog (“He was in Star Trek territory boldly going where no man had gone before. He was rocking the boat, playing against the paradigm and winning.”). Mr. O’Brien also consigned three drawings to “Man Made”—the only works in the show that, as it happens, were not authenticated by the Basquiat Authentication Committee before it disbanded last September. No matter, said Ms. Heiden. “We don’t see an issue, because we know exactly where [they] come from.”

Luckily for the market, the Basquiat well is deep. He produced nearly a thousand canvases and thousands of drawings before he died of a drug overdose at age 27 in 1988. Many of the works in “Man Made” have rarely, if ever, been loaned to exhibitions or appeared at auction. Sotheby’s is keeping mum on the identity of the consignors, but many of the pieces, Ms. Heiden said, are from private European collectors. (One painting was made on a mattress both Basquiat and Andy Warhol had slept on at dealer Bruno Bischofberger’s house in Switzerland.) The booming Basquiat market is bringing some lower-profile collectors out of the woodwork. “Even if the names of these people come out,” said Mr. Rotter, “people will say, ‘Who is that?’”

But boldface names like prodigious Basquiat collector (and dealer) Alberto Mugrabi will surely be on hand for the May 1 party featuring a performance by Swizz Beatz, who has a tattoo portrait of Basquiat on his forearm. “I was with him the other day and he showed it to me, and I was pretty impressed,” Mr. Mugrabi told Gallerist. “I showed him my tattoo of Basquiat, a little crown that I got like 20 years ago. We definitely connected.”