Up until now, the threats of the federal sequester have seemed ominous but vague. We knew there would be cuts to, like, public goods and stuff, in a way that would, uh, somehow affect us, but it’s not until now that we are seeing the true ramifications of our government’s ineptitude.

And let’s just say there are going to be a lot less half-naked men in sailor hats come the end of May.

The sequester has forced the cancellation of Fleet Week, the annual celebration of sailors that brings dozens of ships to New York City ports. The event usually means big bucks for the city’s bars, and, since the repeal of Don’t Ask Don’t Tell, it has meant even bigger bucks for the city’s gay bars, which saw an influx of LGBT sailors come out for last year’s festivities.

According to the New York City Economic Development Corporation, the cancellation of the event will cost the city around $20 million, and gay bars in Chelsea and Hell’s Kitchen, near where the ships dock, will take a particularly large hit.

“It was worth a good 10 percent bump in business,” said Rob Hynds, the owner of two gay sports bars on the West Side, to DNAinfo. “We always ran specials and will not be doing so since it’s canceled.”

One thing’s for sure: the cancellation will mean the loss of a lot of parties like this one, the tragedy of which is pretty self-evident.

DNAinfo quoted one Eric Weinman who attended the event last year, hosted by XL nightclub, and seems to have had a pretty good time. “There were guys, it was their first time ever being at a party like that,” he told DNAinfo. “It was good for them—and they were good for us, if you know what I mean.”

So yeah. The government sucks, basically. 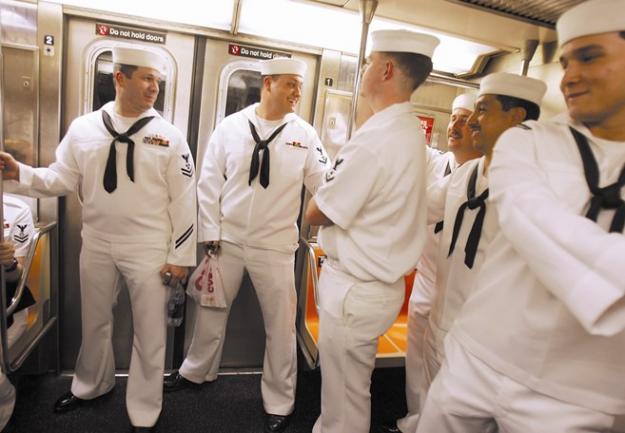