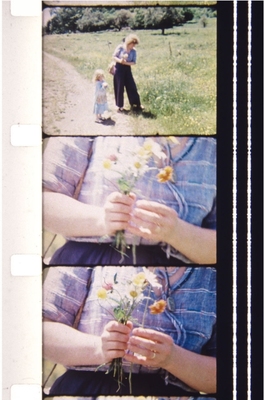 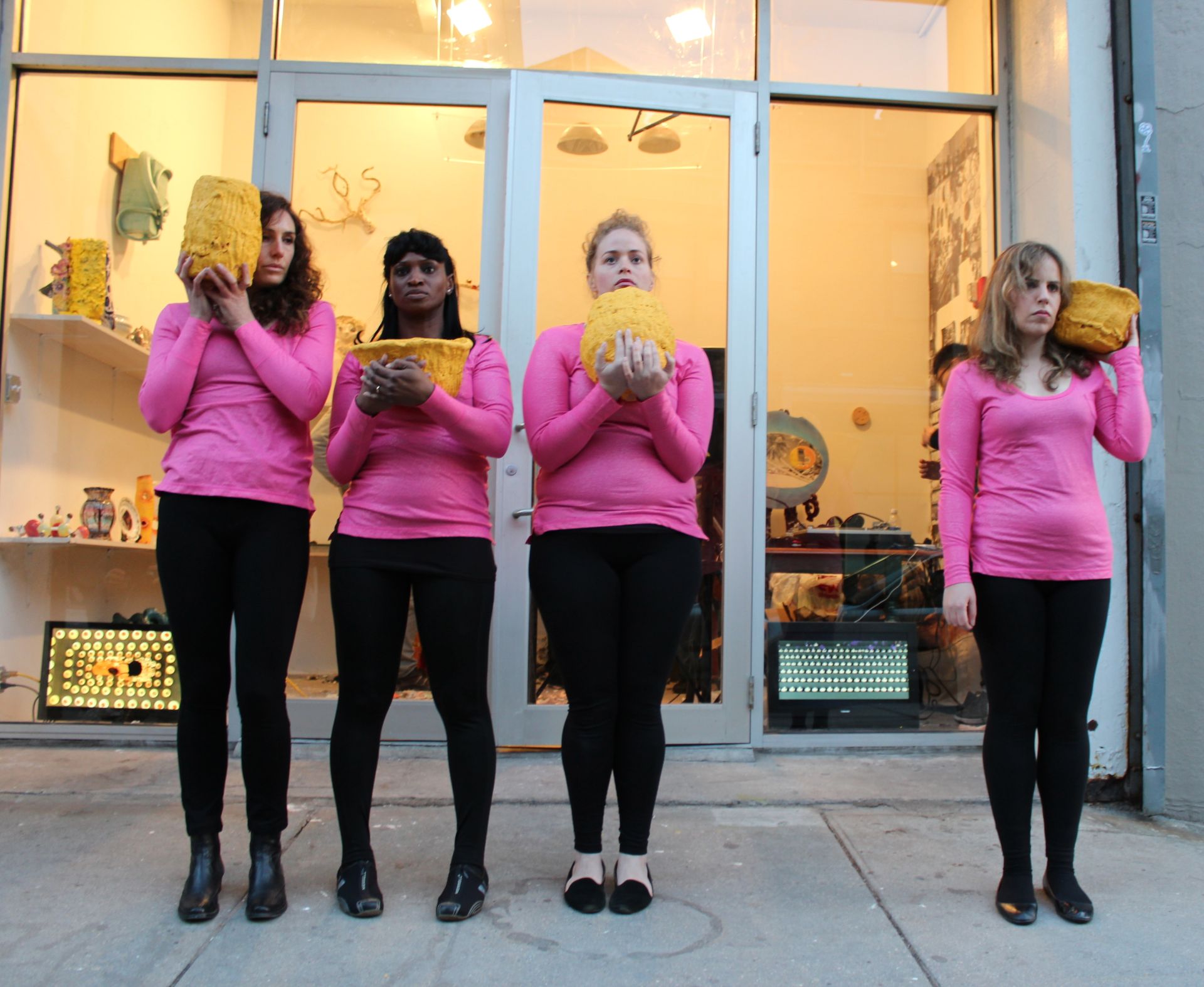 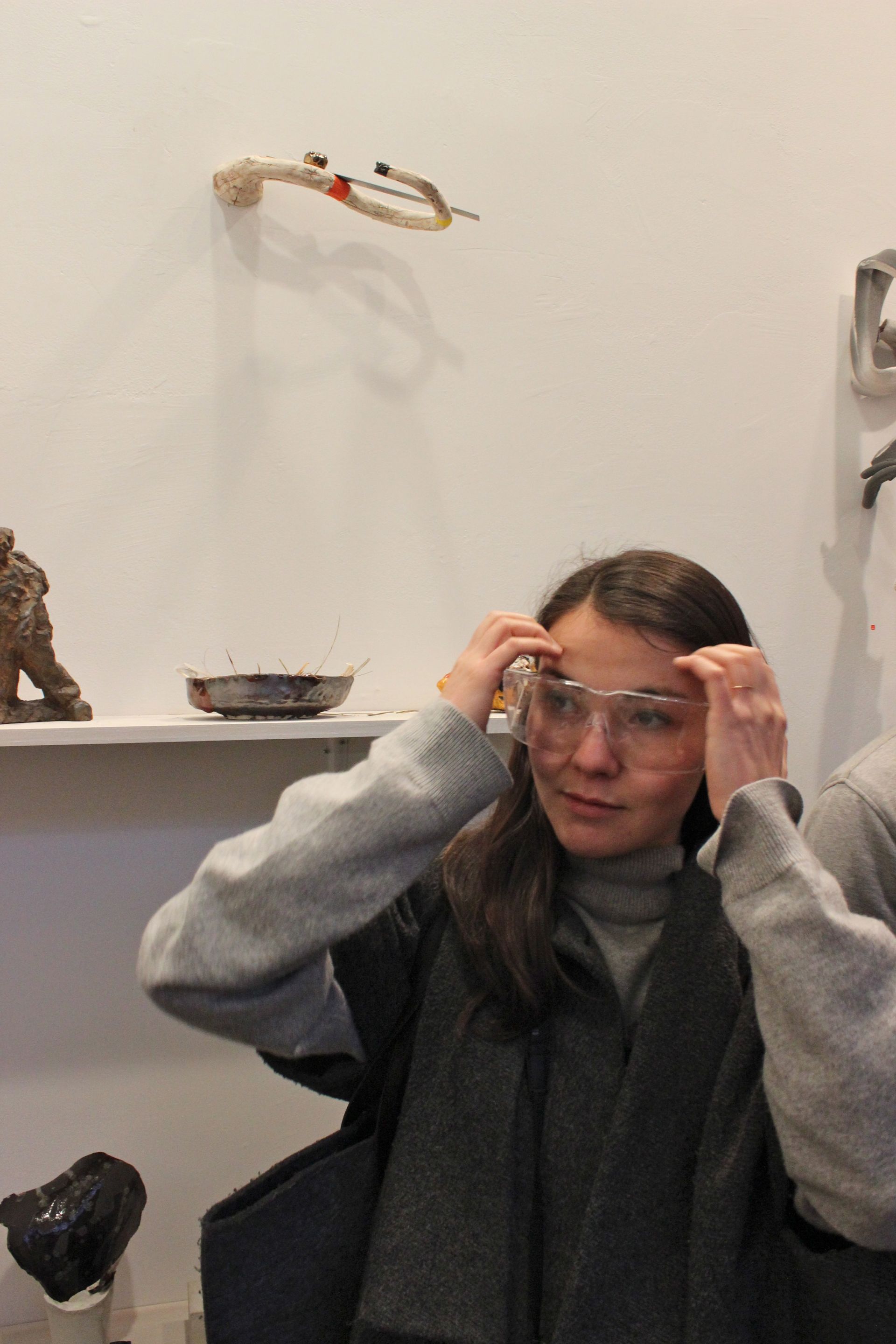 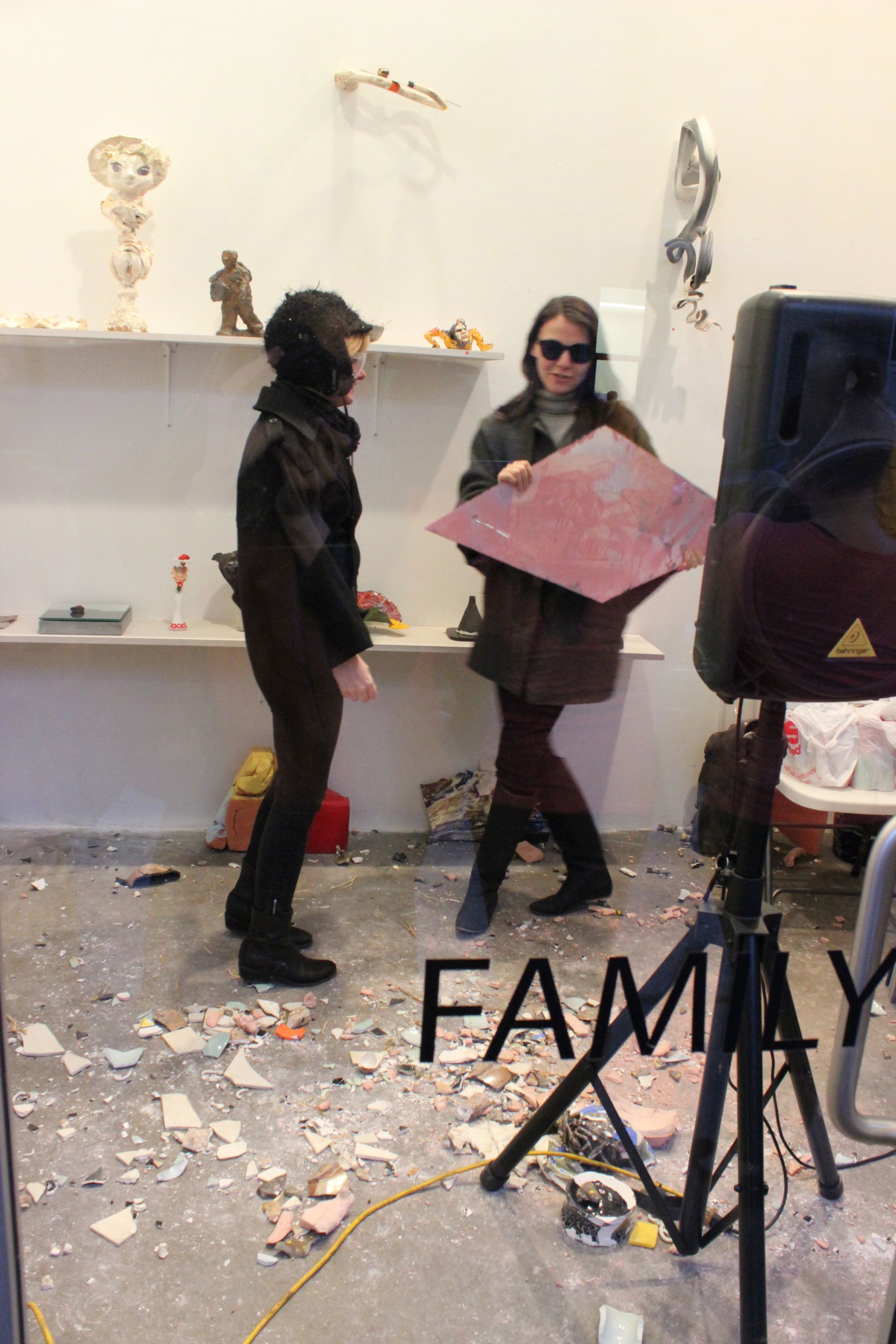 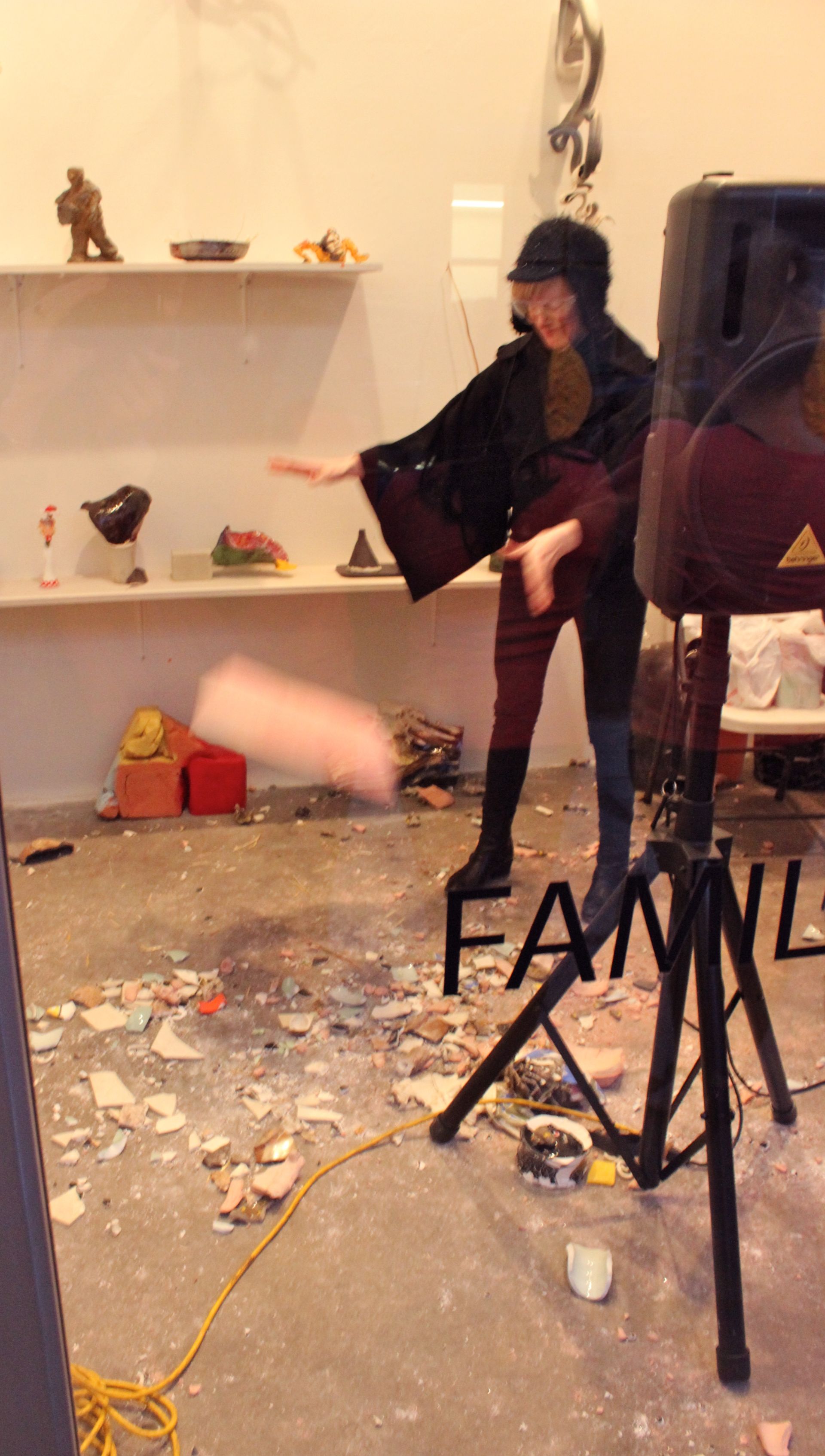 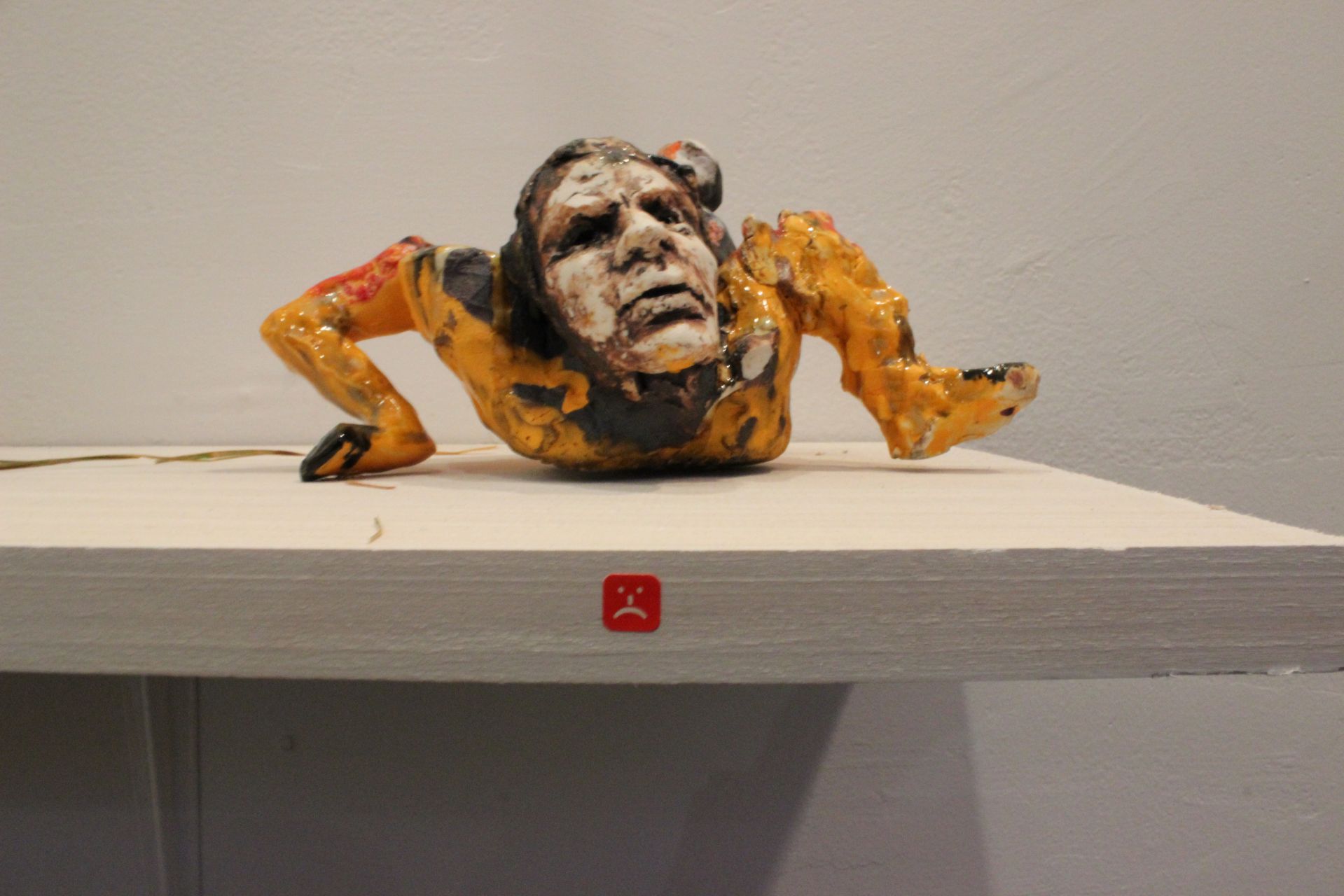 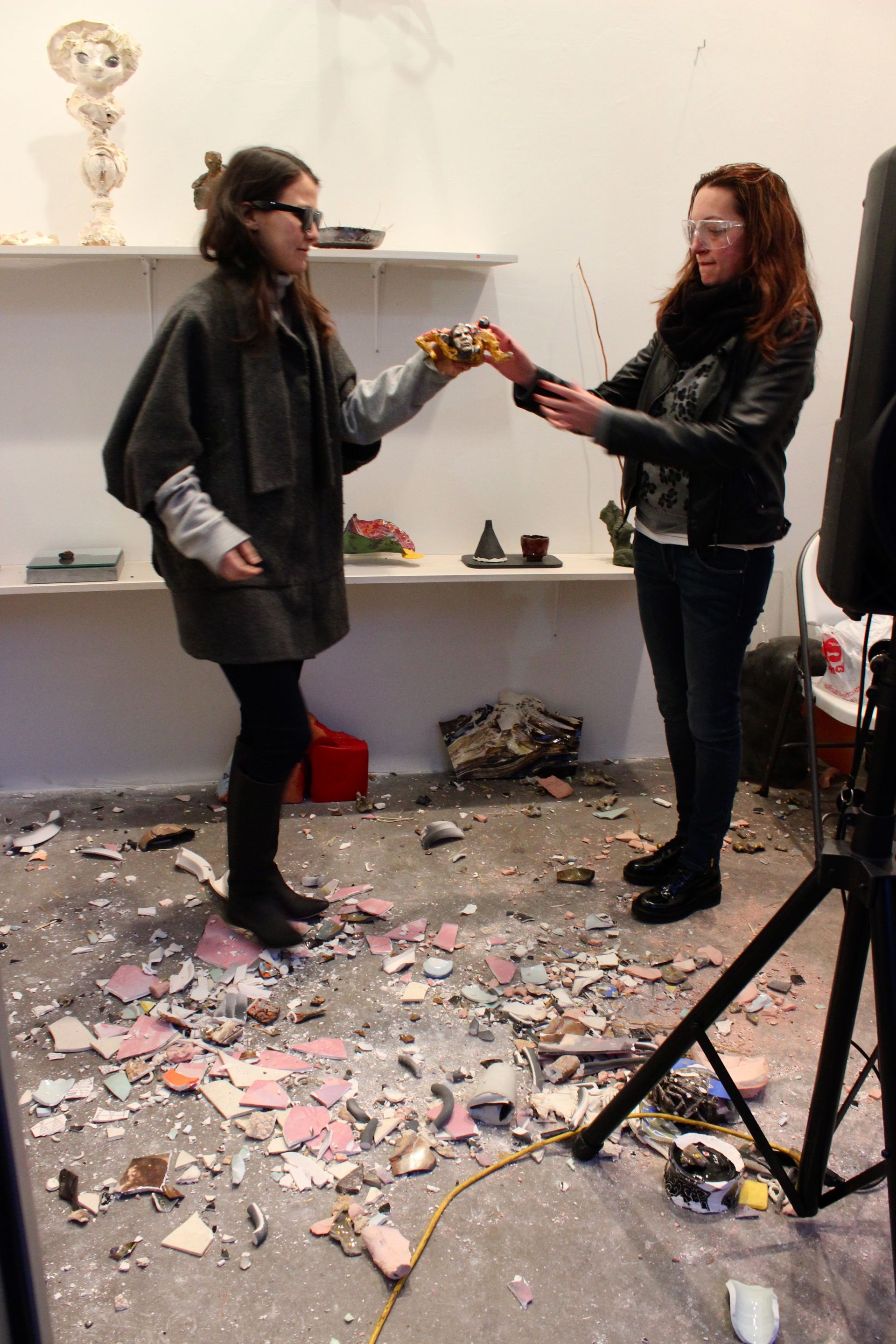 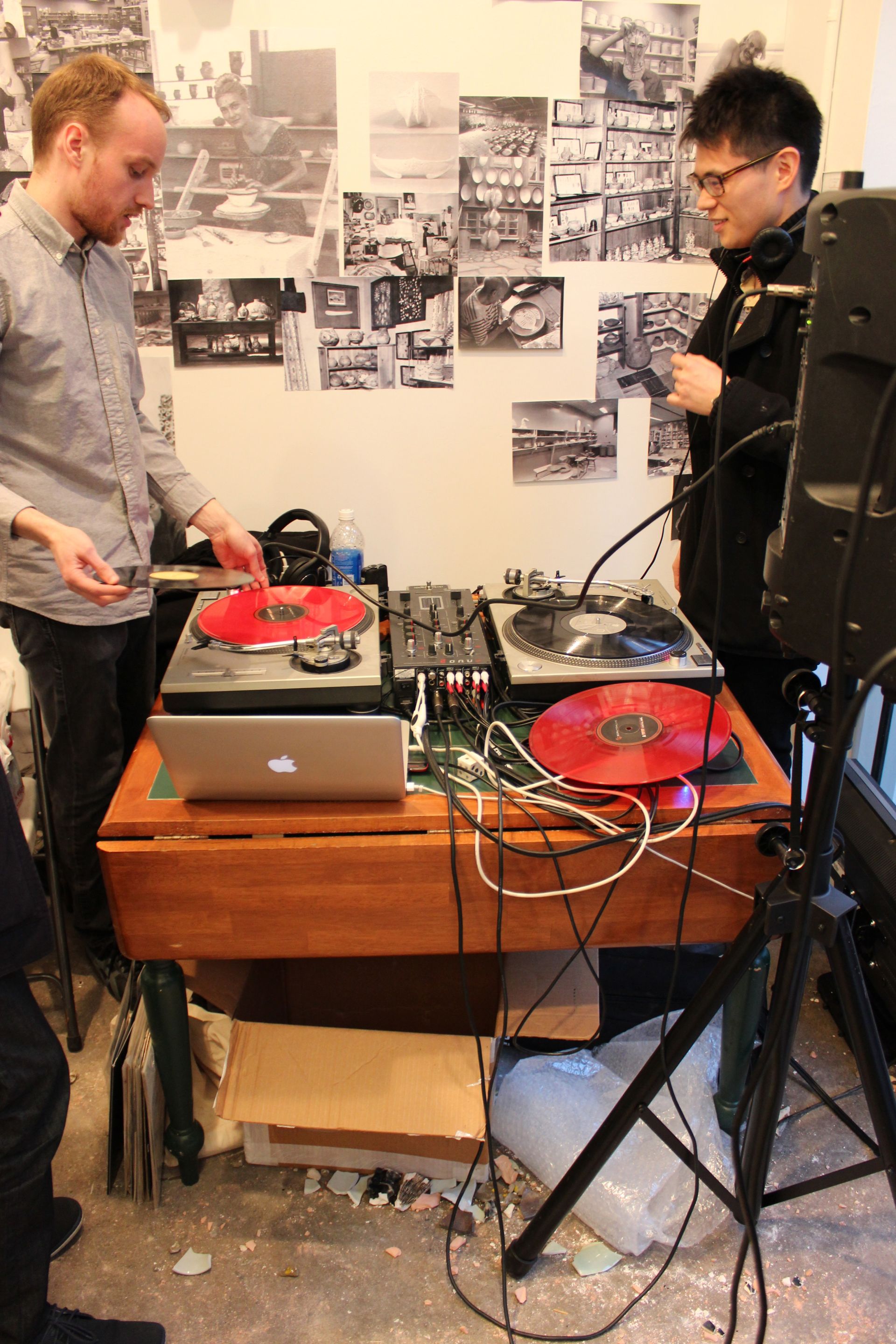 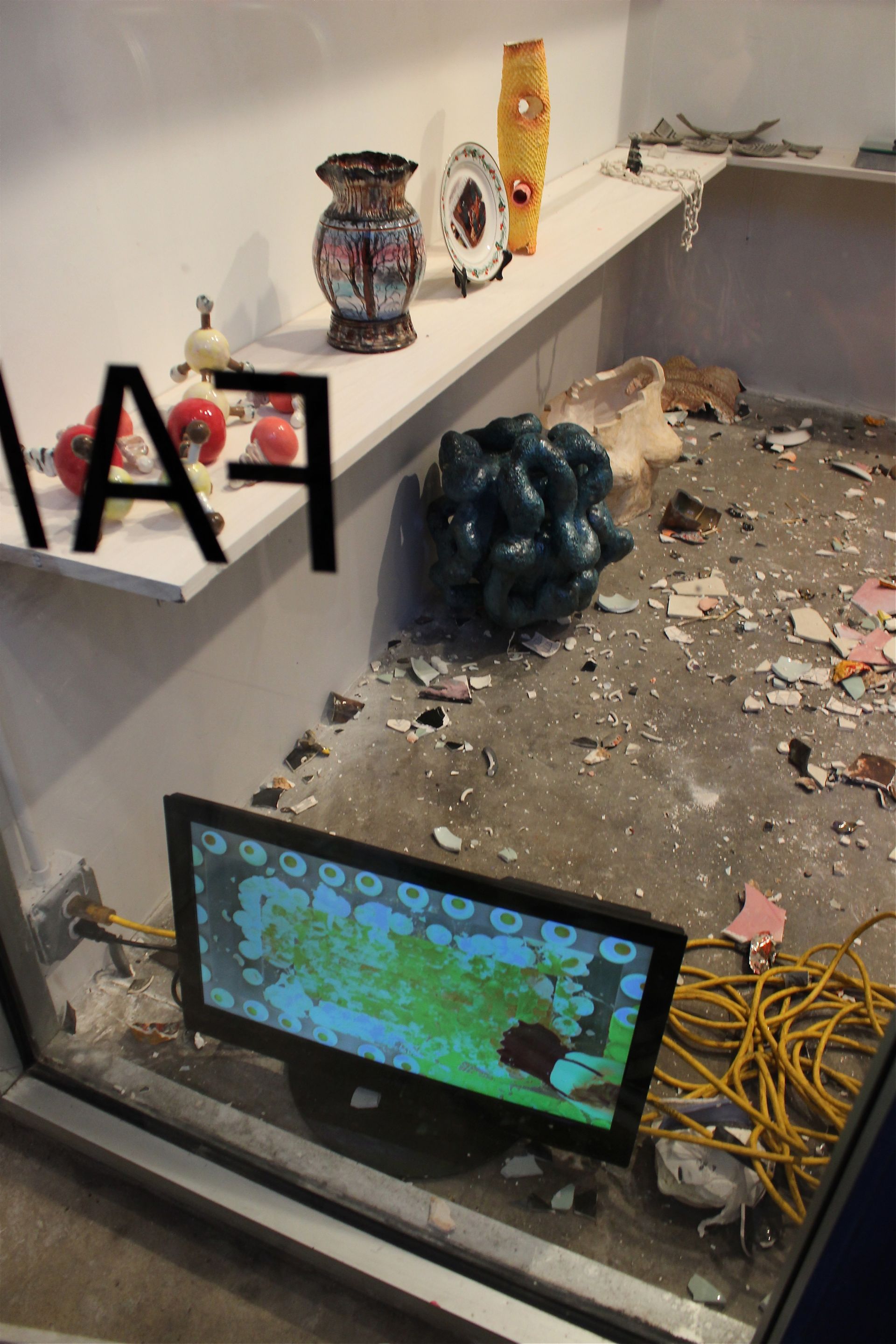 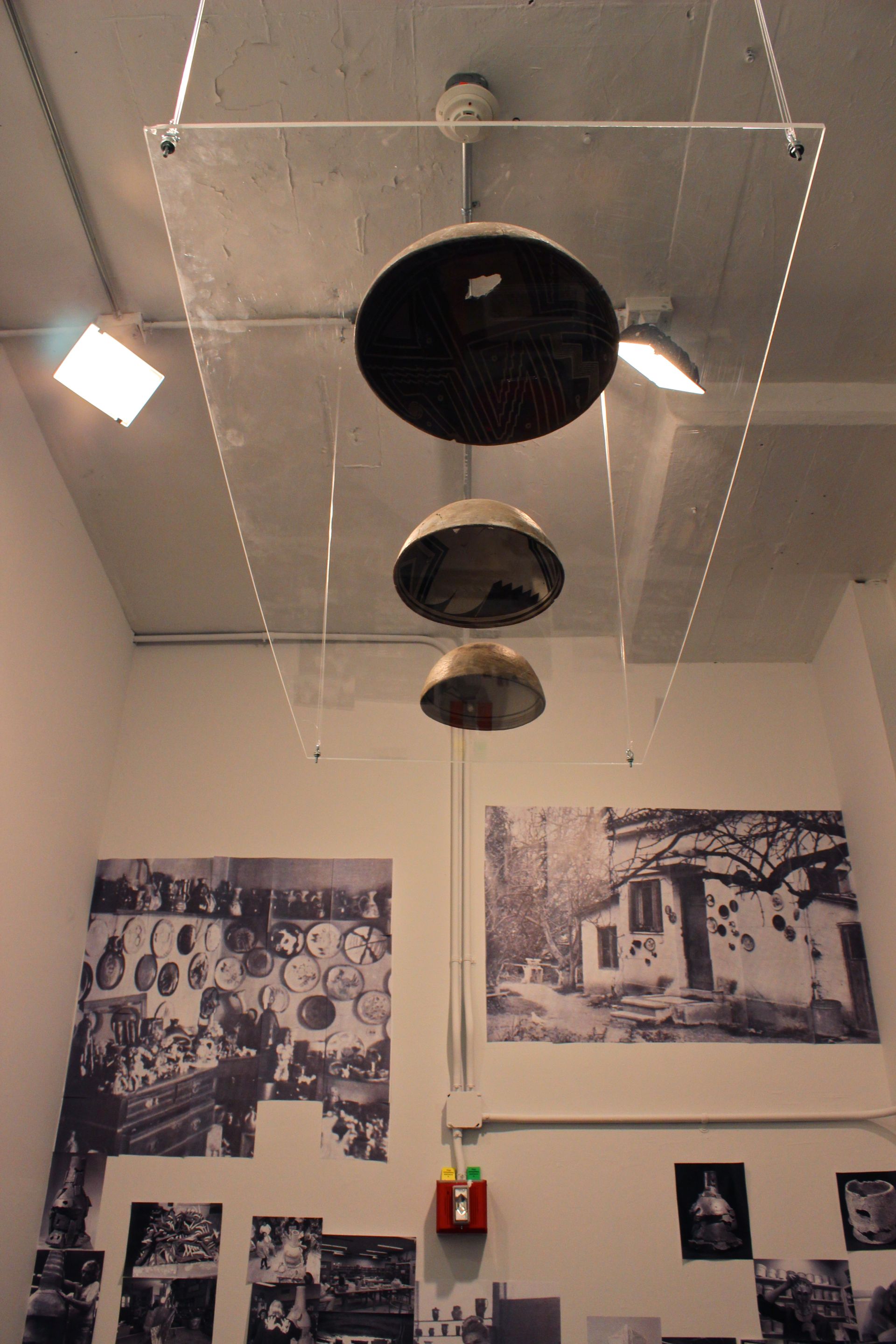 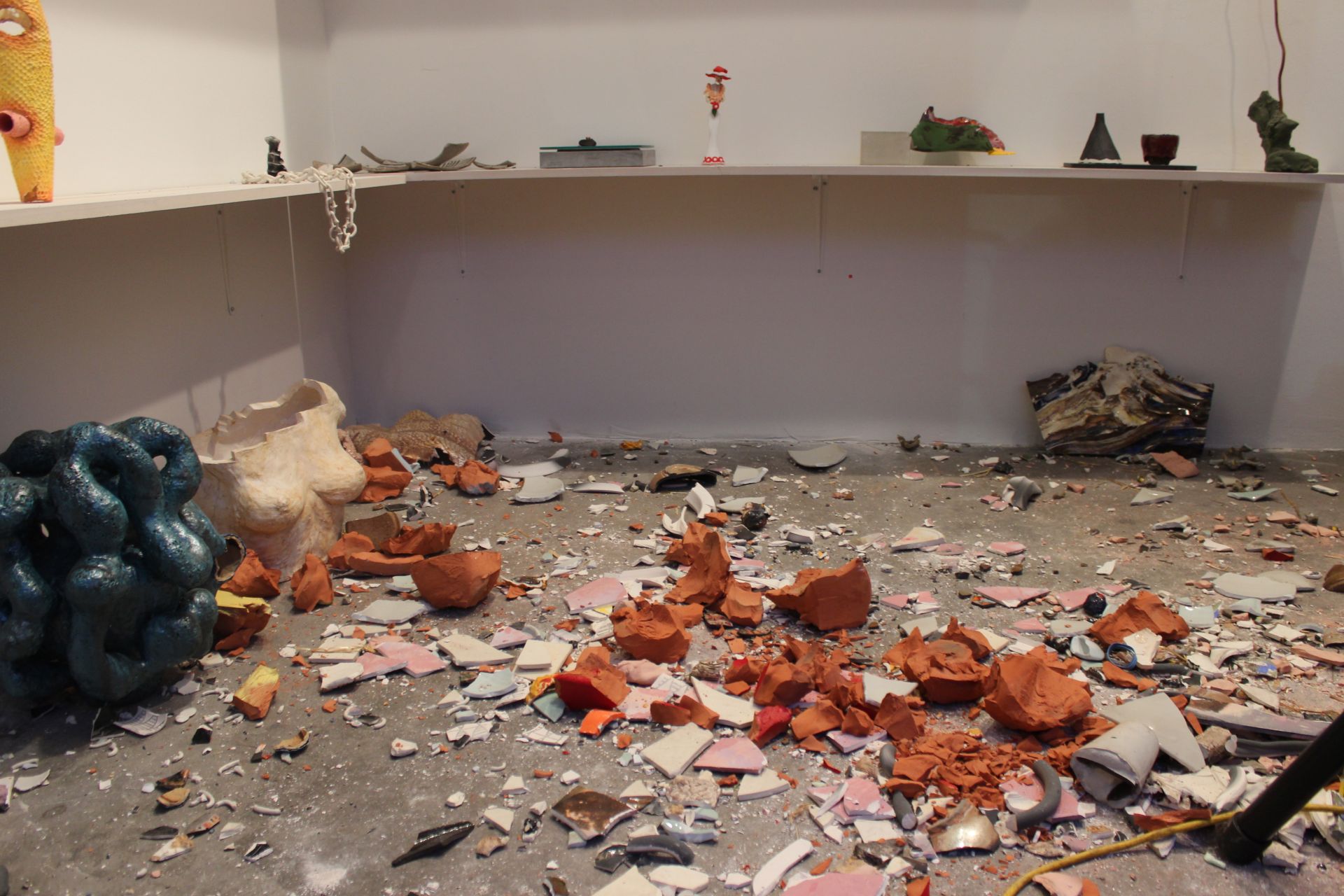 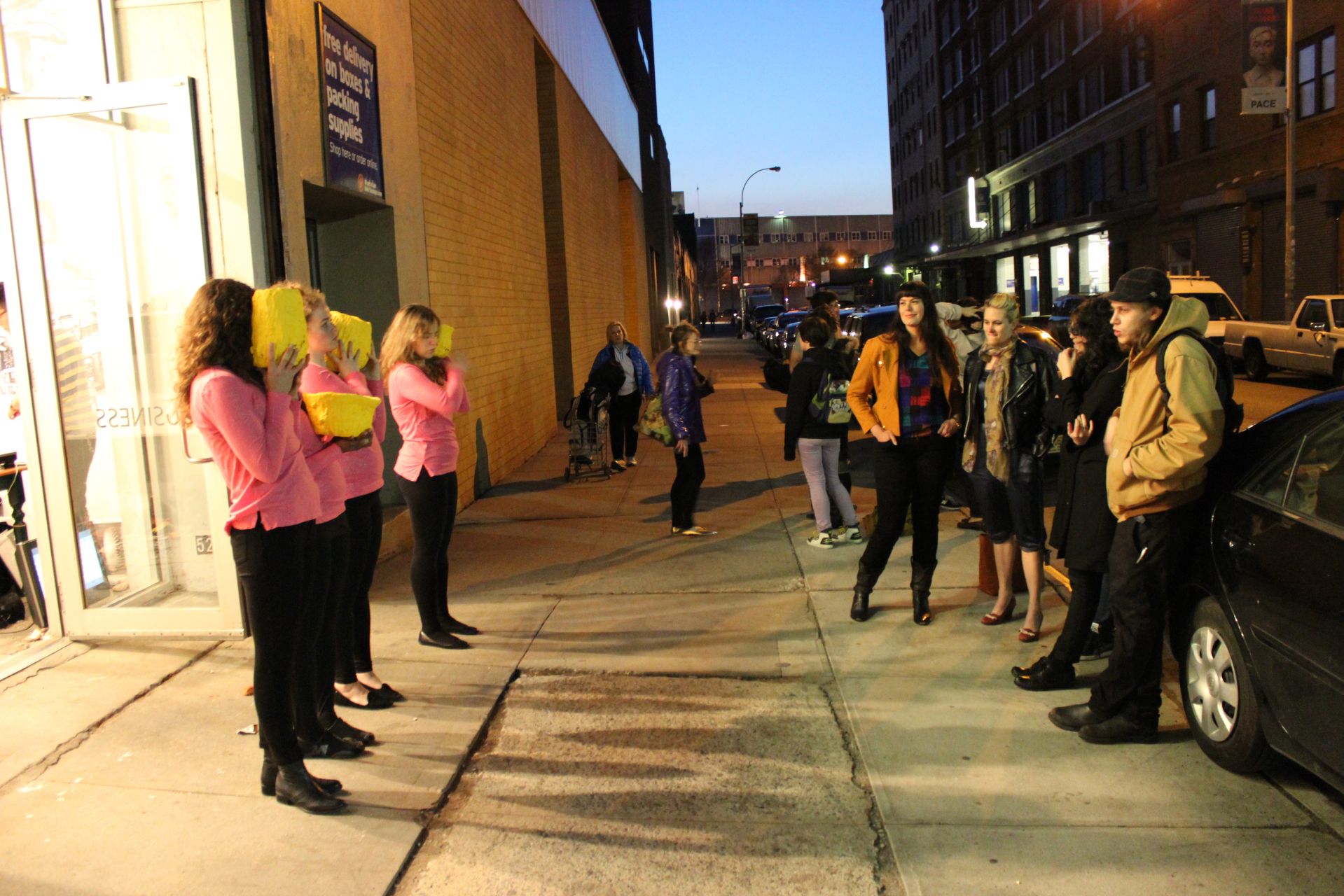 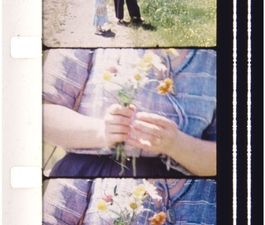 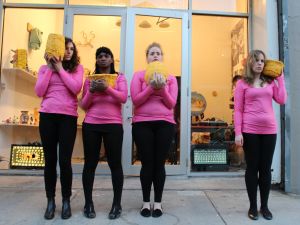 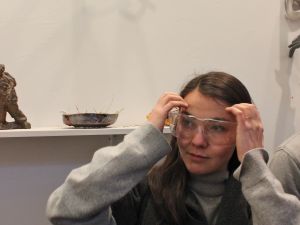 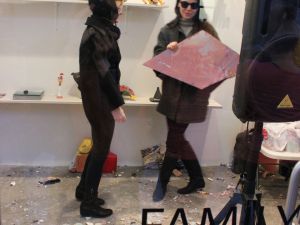 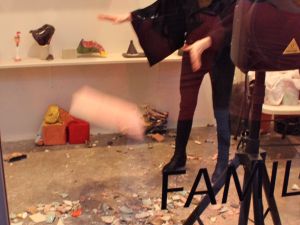 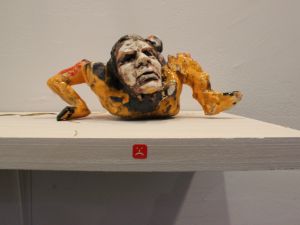 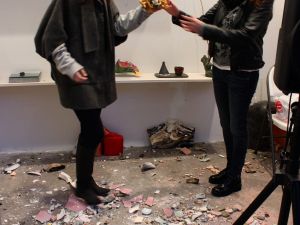 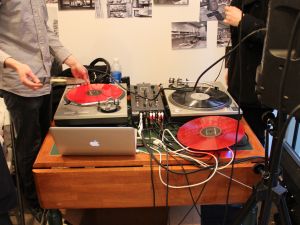 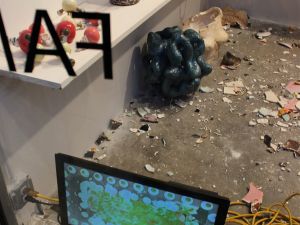 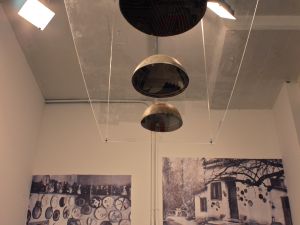 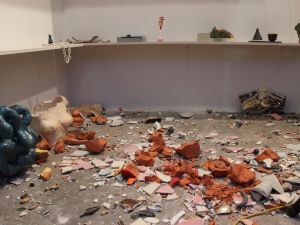 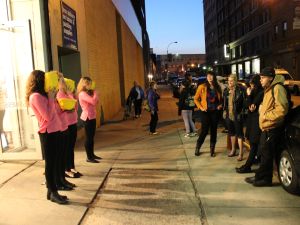 As the sun set on Saturday night, sending long shafts of light east down 21st Street, everything looked fairly normal at Family Business gallery. At least by its standards. An eclectic array of ceramic sculptures was sitting on shelves lining two walls of the shoe-box-sized space. Two scruffy DJs, architecture grad students from Columbia, were manning turntables squeezed into a corner. “Tribal” bowls, as described by Daria Irincheeva, the gallery’s director, (they were either African or Native American—no one was sure) were on loan from a private collection and hanging from the ceiling. A small crowd was gathered outside watching a Kate Gilmore performance piece consisting of four women holding heavy yellow pots for three hours. The only indication of the imminent destruction was the shards of clay littering the floor.

The previous week, for the opening of the show, “In Praise of Chance and Failure,” artists and viewers alike destroyed work deemed unsuccessful by the creators. For this second smashing party, the shelves had since been replenished, and a new batch of sculptures was about to meet the same fate. Each doomed work was marked with a sad face sticker.

Around 7:30, Ms. Irincheeva donned a pair of protective sunglasses and led the first participant into the center of the space. The DJs started playing some music that sounded a lot like seven howler monkeys suffering from claustrophobia might if they were trapped at the bottom of a well. She handed the young woman a pair of safety goggles followed by a flat, rose-colored sculpture. The woman held the piece aloft before throwing it straight at the floor, grinning. It shattered; she looked ambivalent. One by one, Ms. Irincheeva drew members of the crowd into the gallery and gave them a sculpture to destroy—a guy in a bright red hat giddily dispatched with a big, blocky work and a young woman wearing a leather jacket held a weird little armless figure for a moment before plunking him down too.

By the end, the floor of the gallery resembled the raw materials of a Gaudí mosaic. “Maybe we should send them to Julian Schnabel,” quipped Ms. Irincheeva. The smashing complete, the music shifted to a groovy melody and the crowd milled about discussing the destruction.

Outside, Ms. Gilmore looked on merrily at her performers’ progress: they’d been holding the unwieldy yellow pots since 6 p.m., and had another couple hours to go.

“It started with them holding the pots in front of their face, but it’s an impossible thing to do for three hours, so their body is going to just sort of adapt to the piece,” said Ms. Gilmore, who was a ceramicist before she turned to video and performance art. “Hopefully they’ll be able to do it, but it’s really difficult, so some might end up on the ground.” (By 8:30, they were still standing, either shivering with cold or trembling under the weight of the pots.)

While the crowd was busy admiring their fortitude, a woman with a streaky peroxide pompadour sauntered unnoticed into the gallery. “Can I smash something?” she said loudly to no one in particular as she surveyed the remaining works. She asked again, this time addressing the two DJs, who looked up from their turntables and began nervously casting about for Ms. Irincheeva. They couldn’t see her through the window, and the tall woman grabbed a delicate-looking sculpture off one of the shelves. She gave it an ominous heft, testing its weight. Someone saw and rushed to warn Ms. Irincheeva, who ducked around the performers, bursting into the gallery—but it was too late. She rushed in just as the woman hurled the hapless sculpture against the wall where it exploded on impact.

Onlookers blinked at the dented drywall. The DJs stopped their spinning. Ms. Gilmore’s performers remained motionless throughout the commotion. The woman looked fairly unfazed, half-muttering an apology as she slunk out of the gallery.

Asked whether anything like this happened at the opening, Ms. Irincheeva said no—it was “more controlled.” Well, sort of. A fog machine triggered the gallery’s smoke detector and several fire trucks responded (ironically, they didn’t appear when the gallery set its show on fire in January). Apparently the firefighters joined the party.

All photos by Zoë Lescaze.