On any given block in New York, it’s safe to assume that you are walking past the scene of some former crime–a murder, a beating, a robbery. And if you like knowing about New York’s squalid underbelly, a new app that came to our attention today, called “Walking & Stalking,” may be worth your time.

The app, which costs $1.99, is a geographical and historical guide to the sensational murders and drug deals and other illegal incidents that have gone down in our fair city through the years. Though it’s by no means exhaustive, “Walking & Stalking” has a lot of juicy information crammed into it.

“I tried to make it super thorough, very exact,” said Stephanie Hughes, the writer and photographer who created the app. “It’s for people interested in stories, people who tend to dig around for info and details.”

Now, if you didn’t know already, you can find out when and where, exactly, Norman Mailer drunkenly stabbed his second wife, Adele Morales, with a penknife (November 21, 1960, 5 a.m., 250 West 94th Street). You’re familiar with Frank Serpico from the eponymous Sidney Lumet movie starring Al Pacino, but the app will lead you to the apartment building where Mr. Serpico was shot during a heated narcotics raid in 1971 (778 Driggs Avenue, in Williamsburg).

This afternoon, we decided to put the app to use, using the built-in GPS locator that allows you to see what kind of dirty, low-down stuff has occurred in your vicinity.

As it happens, the offices of the Observer are right down the block from the former residence (560 West 43rd Street) of “infamous club promoter” Michael Alig, who, with his roommate, Robert Riggs, “murdered and mutilated Angel Melendez during an early morning confrontation over narcotics and money,” as the app has it.

“The horror had only begun,” the app continues. “Alig and Riggs stashed the body in the bathtub, poured Drano into the corpse, and shut the bathroom door for several days.”

It gets kind of gruesome, so we’ll let you use the app yourself to find out the rest of the story.

Moving on, “Walking & Stalking” led us further west toward a pier on the Hudson River, where, on January 10, 1962, at 7:30 p.m., the 112-pound heroin shipment featured in the The French Connection made its way into the United States.

Quite an event. Though it is, perhaps, overshadowed by what’s currently docked at the pier: the U.S.S. Intrepid. 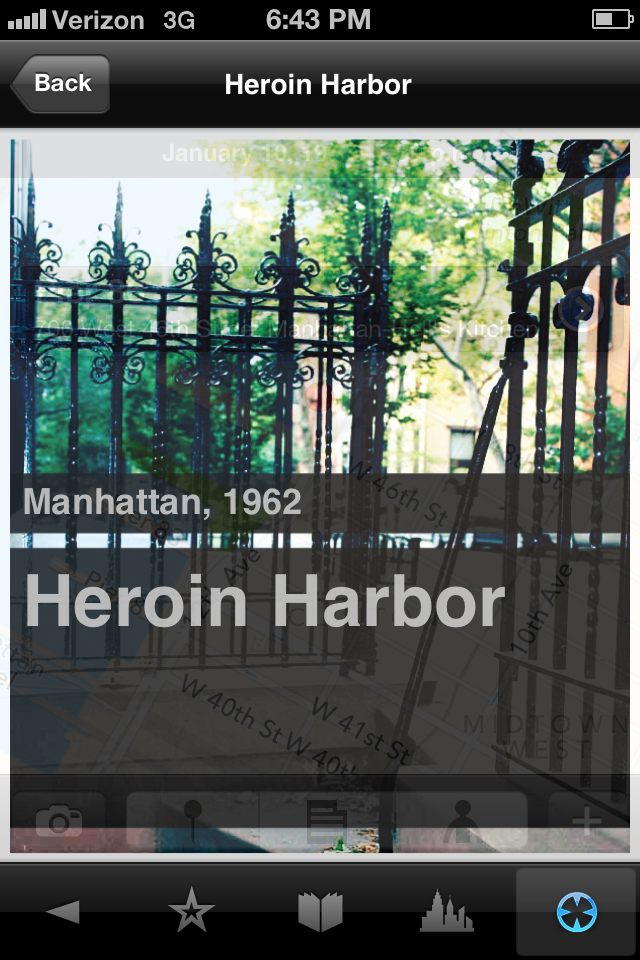