It’s Downtown City Councilman Steve Fulop’s downtown Alamo in the eyes of Jerry Healy’s allies, who claim the mayor is performing adequately everywhere except there, where Ben and Jerry’s has more positive resonance than Jerry.

While there are questions about Fulop’s ability to produce an overwhelming plurality out of his own ward, Fulop claims he won’t necessarily need monster numbers at home.

“Our polling shows us ahead in five out of the six wards,” Fulop told PolitickerNJ.com this afternoon.

He may have to be, barring the turnout of Ward E voters who have not yet shown support for the councilman in past contests. Fulop has had four years to ID more voters, but redistricting changed the dimensions of the wards, and past models may not apply.

At least based on Fulop’s election history, comparisons to the late Mayor Glen Cunningham’s 2001 victory model prove a very long shot at best.

When Cunningham won in 2001, he drove huge numbers off his home turf to produce a crushing Ward F advantage over opponent Tom DeGise: 7,000 to 600 votes. Cunningham lost every other ward with the exception of B, but kept it relatively close almost everywhere. The only ward where DeGise rocked Cunningham was his own Ward D: 4,600 to 1,700 votes.

A disciple of Cunningham’s, who was campaigning with him the day the mayor died, Fulop says he is also competing everywhere, and has a campaign headquarters in Ward F – Cunningham’s base and home to the city’s most concentrated African American vote.

But in a close race – notwithstanding his own view that he can beat the incumbent in five out of six wards – Fulop’s victory could hinge on him producing big in his home ward, and to date he has shown no record of producing enormous pluralities there, certainly not of the variety Cunningham built out of Ward F.

Since the summer 2009 bribery scandal that dismantled whole portions of the mayor’s political infrastructure and badly wobbled the mayor, Fulop’s allies argue that there is much greater potential to grab more votes out of their base – and everywhere else – this time.

Their latest ad shows Healy in a diner grubbing around with disgraced developer Solomon Dwek.

But Healy has responded by burnishing key endorsements, including those of President Barack Obama and – even more significantly arguably in Ward E – New York Mayor Mike Bloomberg.

“There are people in the Newport section who get on the train each morning and go to Wall Street to work and they think their mayor is Bloomberg,” a source told Politicker.com. “If you took them out of one of their sheer towers, blindfolded them and dropped them off a handful of blocks from their home, they would have no idea where they are.”

Healy has fronted his support from Bloomberg nearly as often as his campaign-defining Obama endorsement, in part to put downtown voters in a comfort zone with the incumbent mayor’s re-election. If latte-sipping Bloomberg likes the scrappy Healy – maybe Healy isn’t so bad, runs the argument.

Fulop criticized Healy for relying on the endorsements of public figures who don’t live in Jersey City but the mayor repeatedly counters, “These guys know I’ve been fighting on important issues, like the gun buyback program with Mayor Bloomberg. It’s all about the fights we’ve undertaken and stands we’ve made.”

But while Healy talks about the endorsement avidly, the mayor’s allies claim they are very carefully targeting their few votes in Ward E, and are careful not to chest-thump on Fulop’s home turf.

To a reporter’s question about the lack of a visible presence around the city, including Fulop’s home ward, a Healy contact said that’s by design.

“We are not discounting Ward E, but we are being very calculative there,” said a Healy source, employing the reverse of the strategy that drove U.S. Rep. Steve Rothman (D-9) repeatedly onto U.S. Rep. Bill Pascrell’s (D-9)  home turf of Paterson to mine votes only to succeed in helping to motivate his opponent’s base. 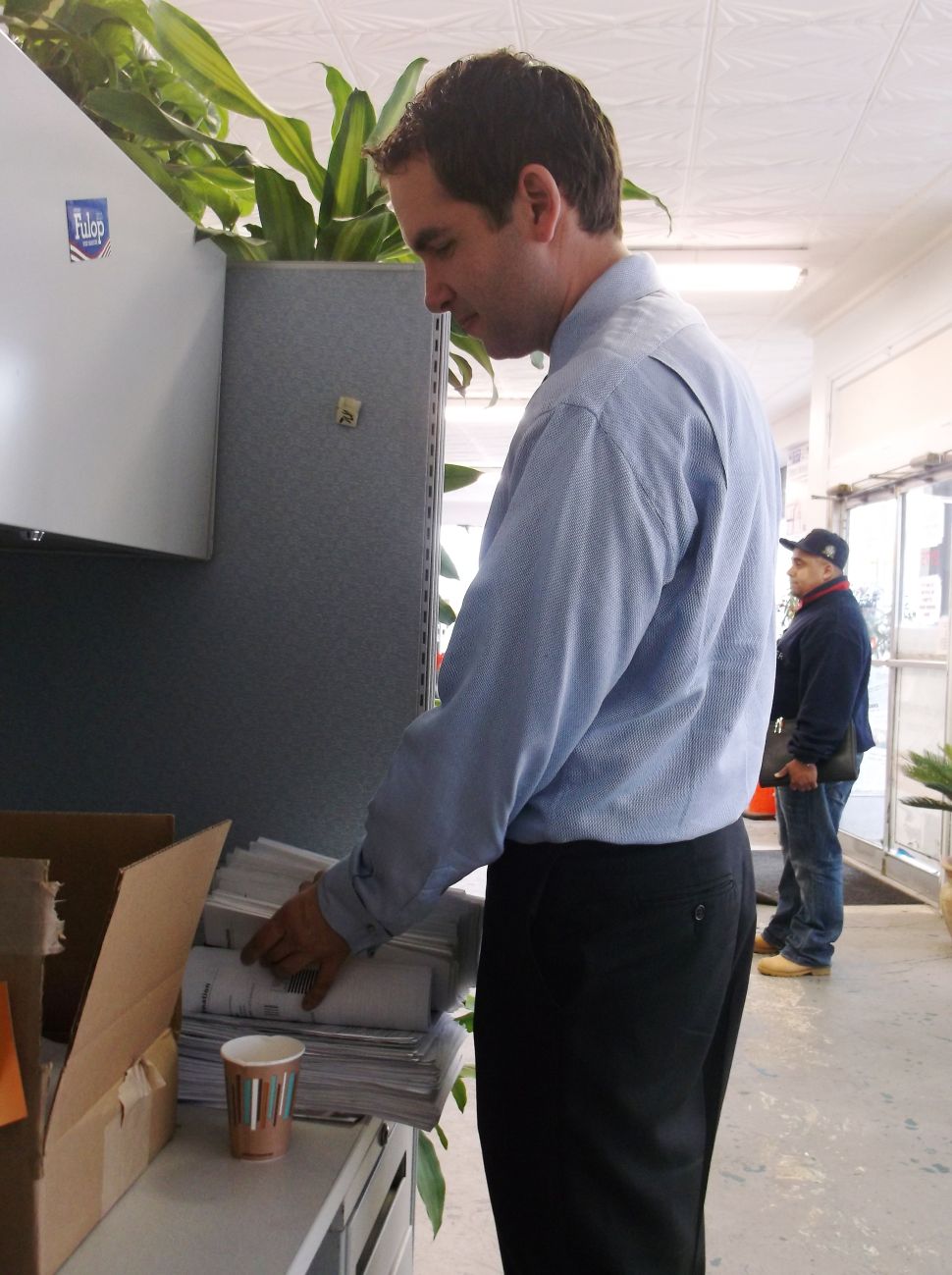