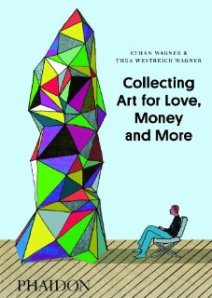 Earlier this month Phaidon released Collecting Art for Love, Money and More, a book by husband and wife collectors and advisors Ethan Wagner and Thea Westreich, and by at least one measure, Mr. Wagner explained during a panel at the 92nd Street Y in Tribeca last night, it’s already a success.

The art world and its denizens, he said while holding his wife’s hand, “have made our lives together—and even before we were together, 22 years ago—so fascinating, that—we thought, if we put something down and created a book, if one person picked up that book and started to collect and went on a journey that was somewhat comparable to the one that we’ve enjoyed, that would be an achievement.” The other day just such a thing happened: a gentleman from Istanbul called Mr. Wagner to say, “I picked up your book, I read your book, and I’m going to collect art!”

The book is a succinct primer for those who are new to the art world, explaining the history and machinations of its participants, institutions and rituals. It’s also handsomely illustrated with photos from exhibitions, studios and collectors’ homes, like a beautiful Roe Ethridge snap of Agnes Gund’s dining room, which features Lichtenstein’s 1962 Masterpiece.

Also on hand were Christie’s rainmaker Amy Cappellazzo (“I’m like a currency trader in something that one percent of the one percent want”), Artists Space’s director, Stefan Kalmár and the 92nd Street Y’s Michele Thompson, who pitched questions.

How should people who are interested in art get started? Mr. Kalmár: “Get involved with an art organization, and see a lot.” Ms. Cappellazzo: “Buy something you love, followed by something that terrifies you and makes you uneasy and scares the shit out of you. You should be forced to grow.” That applies emotionally, intellectually and, for the record, financially. (“I do have a soft spot for people who collect completely out of their means—they’re just like reckless lovers,” she said. “I know people with no 401K, no retirement, no savings for college, four kids, collecting art. It’s like, ‘Really?’”)

Amid all the talk of acquisition, Mr. Kalmár made the important point that in recent years, “we seem to forget that the artist is not producing artworks to be collected, necessarily.”

“Some of them are,” Mr. Cappellazzo said.

“Yes, but the good ones probably don’t,” he replied, adding later that, in comparison to buying art like just another product, “I think there are far more interesting or complex ways to engage with artists.” Great collectors, like the Menils, he said, “listen to artists, and actually use their money not necessarily to buy something but to produce something together for a special occasion or a special context.”

“Parenthetically, Thea and I collect that way,” Wagner said. He had a tough question for Ms. Cappellazzo about her clients at Christie’s. “What percentage of them are collecting in the way we were just talking about, where they’re making a serious inquiry into the intentionality and the thinking of the artist by engaging with the artist, and [what percentage] could care less?”

“I try not to judge the way people love something,” she said. “So I don’t really get judgmental about that. I see people who are flawed in many ways, are human, that love art in a certain way that redeems them to me. And I can find them immensely likable because they’re passionate about something that I’m passionate about.”

In the audience, an enthusiastic young man in a suit was curious about the mysteries of art prices. “How do you establish a bid-ask spread?” he asked. “As someone interested in getting involved in artwork, how does one that is starting out do price discovery?”

Basically art’s worth what someone will pay, Ms. Cappellazzo explained. “Someone offered me today a masterpiece by Leon Golub,” she said. “I thought, ‘You can buy five of these for the price of one Nate Lowman right now!’”

She emphasized that she wasn’t commenting on Mr. Lowman’s work, just making the point that money operates in peculiar ways in the market. “We’re not really pricing a work of art,” she said. “We’re pricing what money means to the five people who might be interested in it.”

Another audience member asked about the panelists’s first art buys, and Ms. Westreich grimaced and laughed.

Ms. Cappellazzo’s was a $500 Kiki Smith self-portrait photograph from Brooke Alexander at Art Chicago. Mr. Kalmár has actually never purchased an artwork. Mr. Wagner’s was a large Stanley Boxer abstraction. He bought it before he met Ms. Westreich. “I have no idea where that painting is today,” he said. “But that sometimes happens in collecting.”

And what of Ms. Westreich? It was years ago, she said, when she was living in D.C., working as a museum docent. “A guy named Lowell Nesbitt was all the rage there at the time,” she said. “I bought a great big beautiful yellow tulip.”