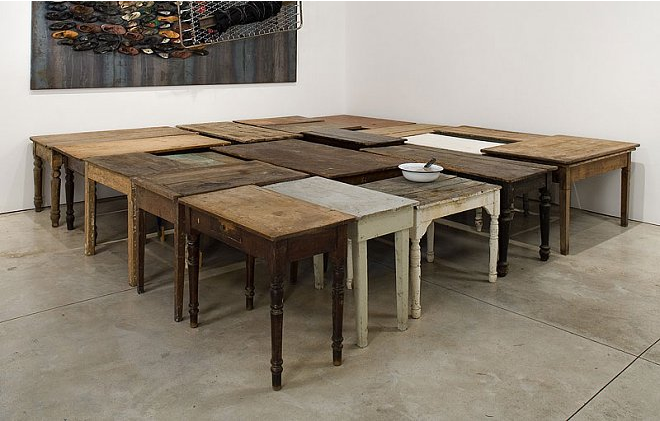 Visitors to the ADAA Art Show last month may remember barely being able to enter Cheim & Read’s booth due to Jannis Kounellis’s massive sculpture All or Nothing at All. Getting in the gallery this Thursday should be somewhat easier, with Mr. Kounellis’s work (new pieces he spent the winter making in his Bushwick studio) safely set back from the entrance. —Zoë Lescaze
Cheim & Read, 547 West 25th Street, New York, 6-8 p.m. 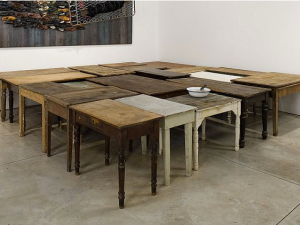 Ted Stamm died in 1984, at the age of 39, a victim of congenital heart disease, which had also killed his father. It would be easy to read the three bumpy black monochromes in the recently closed show at Marianne Boesky, each one composed according to decisions made by the artist’s friends rolling dice, as a series of cheery thumbed noses at fate. But behind that innocent schoolboy Satanism was a fascination with black not as a dialectical term but as a color of its own, a fascination equally informed by minimalist idealism and by the relentlessly forward-moving practicality of aircraft and automotive design. Unlike an automaker, though, Stamm wanted his black unreflective, and he mixed graphite powder into oil paint to get it that way; and unlike a minimalist, he worked not by reduction but by extension: He built canvases in idiosyncratic shapes with direction and speed.

The “Wooster,” for example—Stamm’s studio was on Wooster Street—is a square joined to a slightly smaller right triangle to make a shape like the profile of a carpenter’s plane. In 78SW-22, he followed the inside perimeter of a Wooster with a thick black line, accentuating the shape’s infinitely renewable motion; in 78SW-9 (1978), he painted everything black except for a thin line also following the perimeter. In both cases, what wasn’t painted black wasn’t white, but raw; and even four white Woosters, each one a glossy monochrome except for the single thin black line marking off a corner, were black monochromes to begin with: You can see at the edges that the white was painted on top.

Another shape, the “Dodger,” named for the baseball team, was a flattened dome with one truncated side and a triangle piercing up the middle. Right before the end, with his vocabulary just getting to be fully realized, Stamm may have been on the threshold of bringing his paint to heel and fusing it into a grander and less particular mode of expression. The Malevich-like black cross superimposed on the Dodger 2YR-6 (1979) gets all its power from the canvas’s shape; and ZCT-001, a long horizontal point inspired by the nose of the Concorde, shoots across the wall before your eyes.