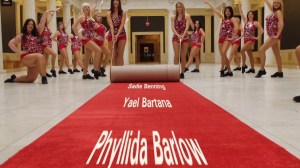 A still from the official video announcement. (Courtesy CMA)

The Carnegie Museum of Art in Pittsburgh has released the list of artists that will appear in the 2013 Carnegie International, which is being organized by Daniel Baumann, Dan Byers, and Tina Kukielski. Artforum shared the news first, and reports that the artists total 35 and hail from 19 countries. The International, which was first held in 1896 (just one year after the first Venice Biennale), has typically been staged every four or five years (the last edition was held in 2008 and curated by Douglas Fogle). It will run this year from Oct. 4, 2013, through March 16, 2014.

Also on tap for the International is the installation of a 1972 playground by Yvan Pestalozzi, a rehang of the Carnegie’s collection to focus on the International’s history (the museum typically acquires works from the show) and an ongoing series of events in Pittsburgh. The full list of artist follows below. But make sure to head over to the International’s official website to watch the official video announcement, which involves a team of female cheerleaders and a red carpet.

Preparing for the exhibition, the curators and other museum professionals have also been running an illuminating blog about the history the show and their activities. It’s well worth a look. Here’s a recent post about President Taft, the Pirates baseball team and the 14th International.