Seeking her next show, Boston-based director Diane Paulus, who has been making a name for herself reimagining classic American musicals, ran through her mental catalog of the musicals she loved. After she did her revival of Hair in 2011, she said, “Pippin was always at the top of the list.” It went on the back burner for a few years while she directed The Gershwins’ Porgy and Bess, which ended its Broadway run in 2012. “It gave me time to think about the physical production I wanted for Pippin,” she said. “I knew a revival would really need to have a physical vocabulary that touched the Fosse style but then also took it to a new place.” That new place, as audiences will discover when the show opens on April 25 at the Music Box Theatre, is the circus.

Roger O. Hirson’s 1972 book had Pippin, Charlemagne’s firstborn, fall in with a traveling troupe of actors. It was, Ms. Paulus pointed out, “rooted in commedia dell’arte style and, of course, Bob Fosse’s signature dance style, which defined that production. But I said, ‘Who are these players? Who is this troupe that mysteriously comes to town, sets up shop and seduces Pippin—and the audience—into taking this journey of self-discovery?’”

That thinking led her to the idea of a traveling circus. In the meantime, she had been trying to work out a project to do with Les 7 doigts de la main, an acrobatic troupe in Montreal. “When I finally connected the dots between them and Pippin and Fosse, the lightbulb went off.”

The toughest part of the production, she said, was combining the Fosse moves with the acrobatics—but it’s also been the most rewarding. “It’s such detailed, physical work, and both have to be meticulous. Acrobats are jumping and flipping and landing inches away from dancers. To make them feel integrated was the real trick, but now that we’ve kinda cracked it and found the way to blend too, it is, for me, a genuine joy.”

Pushing the Pippin envelope even further, Ms. Paulus cast a woman as Leading Player, the part that Ben Vereen took for a star-making, Tony-winning spin in 1973. She had asked the show’s composer, Stephen Schwartz, who this character was. “Anybody different from Pippin,” she remembers him telling her. “The Leading Player is meant to represent The Other—the other thing that Pippin has never experienced.”

So she cast Patina Miller, who was fresh out of her nun’s habit from Sister Act. Only later did she learn that Ms. Miller has a gymnast past, which proved helpful.

Even so, Ms. Miller, who is on a trapeze for part of the show, had to deal with her vertigo. “I’m thinking to myself,” she told The Observer, “‘They don’t know I’m scared of heights. I’ll fake my way through.’ And I did.”

Heights are no problem for the show’s Pippin, however. Matthew James Thomas logged flying time as an alternate Peter Parker in Spider-Man. “I can move and dance, but I wouldn’t call myself an acrobat,” he said. “Not like these guys. But I do like physical shows and I do like doing the daring stunts.”

Berthe, Pippin’s raunchy grandma, was a tough role to fill. In 1972, it was the final role of Irene Ryan (Granny on The Beverly Hillbillies)—and a great one to ride out on, complete with the show-stopping “No Time at All.” (If memory serves, she came “down in one” for her big scene, delivered the goods and left to rapturous applause and a Tony nomination.)

Andrea Martin, as usual, comes on like Andrea-concentrate as Berthe, filling a small role with maximum effect. “I think every good actor does that,” she reasoned. “I can’t not do that. I can’t not commit 100 percent, no matter what it is. I guess it’s just my nature.” She does her big number airborne, twirling like a baton.

“I like that it brings a different perspective to the show,” she said of her role. “This is an older person talking about seizing the day and trying to impart wisdom to a younger person. I have two sons—29 and 31—and I know what it’s like to try to share my life experiences and maybe not have them listen. Or listen. Two different generations—and they’re the ones with the longer life. She’s able to look at this boy and know the mistakes he’s going to make, and hopefully guide him around them.”

Pippin’s father and stepmother, Charlemagne and Fastrada, are played by real-life marrieds Terrence Mann and Charlotte d’Amboise. They met as Cats and rarely get a chance to reteam. “It’s a little difficult, because we have two children,” Ms. d’Amboise said, “but Pippin has been nice for us artistically, and it has been nice for our relationship.”

As a recurring Roxie Hart in the longest-running American musical on Broadway, Chicago, she knows her Fosse and gets to prove it with “Spread a Little Sunshine.”

One thing the cast seems to agree on is the energy Diane Paulus brings to the production. Mr. Mann, a former Javert now with flowing white hair, has nothing but praise for the way she put the show together at Boston’s American Repertory Theatre, where she is artistic director. “She’s just the smartest person in the room,” he said.

“Not only can she tell you how to do it, she can do it herself. She can sing, she can dance, she can act. And she’s tireless. She knows every aspect about what’s going on with the show. Her instincts about what’s right and what’s wrong in a scene, you just trust. And everybody feels that way. It’s extraordinary when you can be in a room with somebody that you just trust and you let them take you on the journey.”

That’s seconded by Rachel Bay Jones, a comedienne in the Carol Kane mold who plays Pippin’s love interest, Catherine, a widow with a child who is his way to The Simple Life. “Diane is enormously creative and free and open,” she said. “She creates shows where actors are really given breadth to grow and give rich performances.”

Chet Walker, 58, was a teenager—at the time, the youngest dancer on Broadway—40 years ago when he played a peasant in the original production of Pippin. Now he has been tapped to create choreography “in the style of Bob Fosse,” much as Ann Reinking did for Chicago. He didn’t change a step of the “Manson trio” number, a signature Fosse piece that showed up in the middle of the “Glory” number and was extracted for a now-famous TV ad—the first time the medium promoted a Broadway show.

Mr. Schwartz’s theatrical-pop score now sports new orchestrations by Larry Hochman. “In some cases,” added music director Charlie Alterman, “we’ve done new arrangements, particularly in relation to the acrobatics. Because of this whole circus concept, we’ve given a little circus flair to the sound of the music. I would say other elements of the score really harked to the essence of the original. Even without making an active attempt to update the sound of the show, just the sensibility of it being orchestrated in 2013 and played by musicians in 2013 gives it a different feel.”

Like Mr. Hirson, Mr. Schwartz has hovered on the sidelines while the show he helped create is being reinvented. To date, there have been no complaints. In fact, said Mr. Alterman, “Stephen’s been incredibly supportive. He’s not shy about saying what he feels, but he always has great things to say. He also puts a lot of trust in people, and he’s really interested to see what we’re going to bring to the table.”

Trust appears to be the operative word for Pippin. It has special gravity for Philip Rosenberg, one of the seven acrobats executing phenomenal high-flying feats throughout the show. “I never did anything in the musical-theater realm at all,” the 26-year-old said. “It was always circus and acrobatic, so this is all new to me.”

Not all stunts come off smoothly, Mr. Rosenberg allowed, but that goes with the sawdust turf. “Sometimes it messes up, but that’s the beauty of the circus. You get another try at it. There’s a rule of three in circus: you get three tries, and the more times you mess up, the more the audience will clap when you make it. It builds the pressure.” 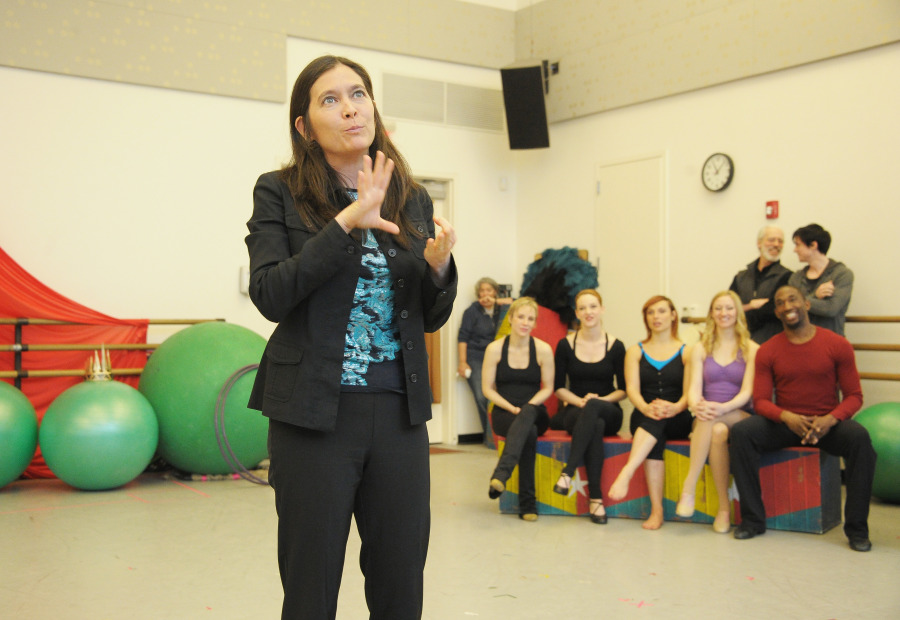