Chances are excellent—even without the Las Vegas odds-makers weighing in on the subject—that you won’t recognize the gentleman who, on June 9, steps onto the stage of Radio City Music Hall and collects his Tony Award for Best Actor in a Musical.

As the Broadway season enters its homestretch, two front-runners are emerging in this category. One works under the name of Lola, the other as Miss Trunchbull. They come from opposite ends of the runway—Lola in sparkly, 2½-foot-high red leather boots, Miss Trunchbull in a drab, green, severely tailored pantsuit.

That’s right, this particular Tony contest is shaping up as a drag race.

In this corner, representing the stars and stripes (with extra sparkle on the red stripes), is Billy Porter, 43, of Pittsburgh, Pa., schooled at Carnegie Mellon and best known on Broadway for originating the high-octave “Teen Angel” in the 1984 revival of Grease. In Kinky Boots, he plays a drag club singer who revitalizes a failing Northampton shoe factory by switching its output from sensible men’s shoes to ridiculously over-the-top boots that are made for flaunting. Guess what? Sex sells.

In the other corner, wearing Union Jack trunks, is Bertie Carvel, 35, the genuine British article, schooled at Sussex and RADA, best known for hassling Anne Hathaway into whoredom in Les Misérables. In Matilda, he is reprising his Olivier Award-winning performance of the hard-nosed headmistress of Crunchen Hall Primary School, a cackling crone of the Miss Gulch-Miss Hannigan school of comic villainy.

“Harvey Fierstein is an idol of mine, and I don’t have many, because I didn’t grow up with that,” Mr. Porter told The Observer. “But I don’t think there’s anybody else on this planet who could, should and did write a role I could step into like this. In fact, I even did a monologue from Torch Song Trilogy to get into college.”

It’s true. Mr. Fierstein is the go-to guy for diva fittings and alterations, as he should be: he won two of his Tonys in dresses (Torch Song Trilogy and Hairspray), and he incubated two more by writing La Cage aux Folles. Its lead character, Albin, entertains in drag at a St-Tropez nightclub, and it’s a part that has won Tonys two out of the three times it was on Broadway—for George Hearn in 1983 and for Douglas Hodge in 2010. The one Tony-winning transvestite with no Fierstein ties at all is Wilson Jermaine Heredia, the doomed Angel of Rent.

For Lola, Mr. Porter pulls out all the stops, prancing out this intimidating, undulating force of nature. How does it feel parading around the stage in those long-stemmed hot-red boots? “Empowering!” Mr. Porter shot back. “They’re sexy. I feel like I can take over the world.” And he plays it accordingly. When he shifts to “civilian” attire, he has mastered a cool, convincing slink in heels ranging from four inches to seven. “It feels funny to walk in flats now.”

Costume designer Gregg Barnes, who gussied up The Drowsy Chaperone and Follies to Tony-winning effect, lays on the beads and sequins, keeping Mr. Porter in a fairly constant glamorous whirl—all to the lively tunes of Cyndi Lauper and the athletic choreography of director Jerry Mitchell.

When Mr. Porter flies off stage, it’s always into the waiting arms of his personal dresser—“and a couple of times, another dresser assists,” he said. “It looks out front a lot more difficult than it is. But it’s not easy, either. It’s the magic of the theater.”

Quick changes aside, there is nothing challenging for him about playing Lola. “Nothing. I’ve lived it. I’ve been an outsider. I’ve been an outcast. I’m an African-American gay Christian man living in America. I know what that feels like.

“Sometimes there are audiences who have a difficult time with Lola at the top of the show. You can tell they’re uncomfortable. They’re shifting and crinkling programs. Of course, that softens as the show goes on. Once I do this song, ‘I’m Not My Father’s Son,’ about disappointing my father, they know they can’t write Lola off anymore.

“With this show—the music, the subject material—it was very important to me—and Jerry as well—that Lola looked like she could be in a magazine today, like a woman walking down the street today. I crafted the role around authenticity and realness—feminine realism.”

GAYNESS IS NOT, OF COURSE, a prerequisite to play a transvestite. Mr. Porter points to The Nance, about to open a block away. It takes place in the LaGuardia-era New York of the late ’30s, when straight men still did drag or minced about the vaudeville stage as gays.

Enter Bertie Carvel, younger and much better-looking than the harridan-in-heat he plays in Matilda. His gender agenda is the polar opposite of Mr. Porter’s. He would be satisfied if the audience couldn’t figure out whether Miss Trunchbull is played by a man or a woman. “I’m not bothered either way,” he shrugged. “I take it as a compliment when people can’t believe that it was me playing the part, but I’m not trying to disguise anything. I’ve never thought that it was especially funny that a man was playing a woman. That’s not the gag. If that’s the gag—if that’s what people find funny—then we’re kinda lost.”

Mr. Carvel was replaced in the London production by a man, for whatever that’s worth—but he could envision the role being played by a woman as well. “To be honest,” Mr. Carvel said of the role, “it’s hugely enjoyable. I really enjoy transforming. Any role you play as an actor is a transformation. ”

He grew up the only child of a journalist father and psychiatrist mother, and the basics of these professions—the fact-finding and the analyzing—have proved helpful qualities for a serious actor to have inherited.

Both came to bear in putting together that tightly wound minefield of tics and twitches, Miss Trunchbull. “Most of it comes from the text, really,” he said, referring to Dennis Kelly’s book and Tim Minchin’s songs, both based on Roald Dahl’s 1988 children’s novel.

“One’s job as an actor, really, was to pay attention to those signposts and let your imagination work on it.” After his imagination had been percolating a spell, he met briefly with the man who had hired him for the assignment, director Matthew Warchus. “It became clear we were thinking in a similar direction. Then I went away and let my imagination play.” Led by logic, he physicalized his characterization from the facts: the character was the Olympic hammer-throwing champion of 1969. And hammer throwers have huge trapezius muscles. “If you build up the trapezius,” he discovered, “it creates the impression you have almost no neck.”

In fact, the sport beefed up her whole upper body. “I want her chest to enter the room before anything else,” Mr. Carvel said, and to this end Phil Reynolds of the Batman films created a special breastplate that does the trick. Miss Trunchbull is all-torso on spindly legs, moving about the stage as if motorized in uncertain, ungainly spurts and lunges, much like Charles Laughton’s hunchback.

The lady is not without delicate touches, however. There is that hand she keeps in the air at all times, a quivering claw that suggests an encounter with nerve gas in the war trenches. She moves with surprising speed and daintiness.

“They call the hammer throw the ballet of the big man,” Mr. Carvel pointed out. “It is kinda counter-balletic, this incongruous mix of delicate grace and great physical bulk. Hammer throwers turn on a dime, because, in order to throw this object a hundred meters, you have to create a huge amount of centrifugal force. You have to turn your body on a very small area—this is the balletic step the hammer throw is based on.”

Decades past her Olympic prime, Miss Trunchbull has been reduced to lording over, and terrorizing, little schoolgirls. “To some extent, her once-powerful athlete’s physique has shifted somewhat, twisted by age and bitterness.”

Costume and wig do much of the transforming work here. While Mr. Porter is having extra glitter applied to his lip-gloss, Mr. Carvel is giving himself smoker’s teeth, painting on brown enamel. “Whatever switches clicked in one’s head while working out how it should feel to be Miss Trunchbull, I feel completely supported by looking in the mirror before I go on and going, ‘Yes, that’s who I saw in my mind’s eye.’”

Mr. Carvel tends to downplay how little time he spends on stage. “I haven’t really measured it, but my girlfriend said at one point, ‘You’re barely in this,’ implying ‘How are you getting away with all this acclaim?’ It’s true,” he said. “Everybody else does all the hard work.”

It’s not true. The show turns 48-karat gold when he hits the stage.

Miss Trunchbull’s reputation precedes Mr. Carvel’s arrival, the stage darkening at the first mention of her name. “It’s a great gift to be the dreaded arrival—an old trick, really—building a character up for 16 pages before he arrives,” he said.

It certainly worked dark wonders for the Phantom of the Opera, which has the dubious distinction of being the shortest role, in terms of stage time, ever to receive the Tony Award for Best Actor in a Musical. Miss Trunchbull now rivals that record. When clocked recently on the same night, both performances came in at 41 minutes, 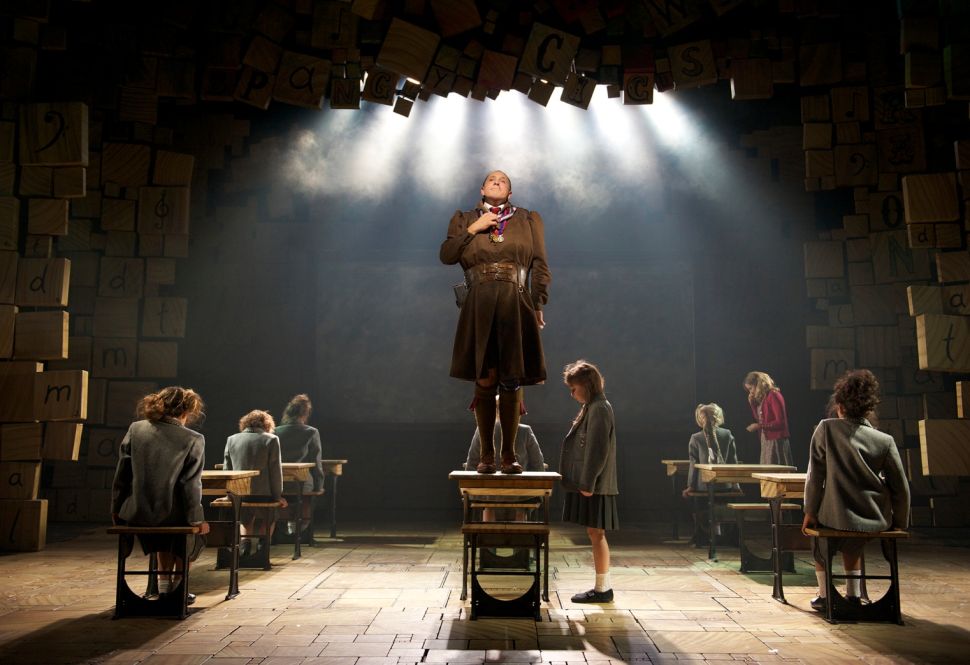